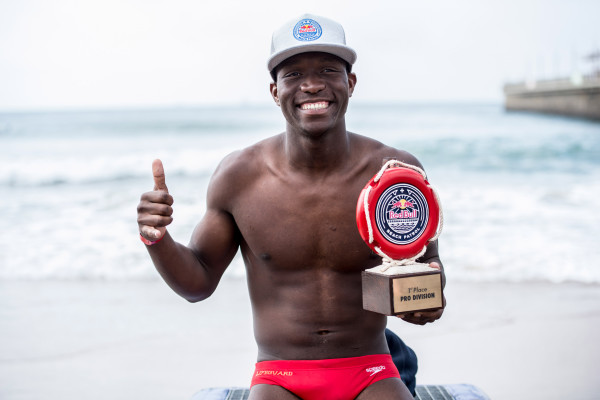 Following his win at the 2015 edition, Wiseman Mvubu will return to defend his title at the 2016 Red Bull Beach Patrol on the Durban Beach Front on 10 July. Craig Kolesky/
Red Bull Content Pool

Durban’s famous Golden Mile will host the 2016 Red Bull Beach Patrol and should provide spectators with an exciting spectacle as the country’s best surf lifesavers and everyday heroes battle it out for the title across an array of disciplines for the title, Wiseman Mvubu is one such hero.

Durban, South Africa – With some of the country’s top surf lifesaving clubs along its shores, North Beach in Durban provides the ideal backdrop for the one-of-a-kind Red Bull Beach Patrol which honours the everyday heroes like 2015 champion Wiseman Mvubu who returns to defend his title in 2016.

Spreading the surf lifesaving word is something that Mvubu and many lifesavers in Durban are passionate about and he feels that an event of this calibre and excitement is the perfect opportunity to showcase an exciting angle to the sport.

“I got involved in lifesaving about six years ago when I started swimming in Chesterville. We were then introduced to Marine Surf Lifesaving Club and it has just continued from there,” Mvubu, a Marine SLC member, said.

“We really want to try and get youngsters involved and grow the profile of the sport that we love so much so having such an exciting event in the heart of the Durban beachfront is going to be great exposure.”

A typical day for our hero Mvubu starts at 8am on the Durban Beachfront where he is a life guard at Addington Beach and recently his eight hour shift has been followed by a training session at the Kings Park Swimming Pool as he prepares for his Red Bull Beach Patrol title defence.

“We do a bit of training when we are not busy at work but my main training sessions in the build-up to the Red Bull Beach Patrol have been after work.

“When I’m not training for an event I like to head home and just relax after work – I don’t get too much time to do that so when I can, I really enjoy it,” a laid back Mvubu added.

The event has changed its format from the inaugural edition in 2015 with lifesavers taking on three preliminary rounds of competition before the iron man final which incorporates swim, board and ski disciplines into one out-and-out sprint for the title.

“I really enjoyed the first edition of the Red Bull Beach Patrol and I am sure that this year’s event is going to be just as good,” a buoyant Mvumbu claimed. “It’s awesome that a brand like Red Bull continue their support for a sport that we are so passionate about and want to present to the public.”

“The iron man is my favourite event and I did well in that event at the national lifesaving champs last year so I am confident that I can do well again at the Beach Patrol,” he added assertively.

To enter or for more information, head to www.redbull.co.za/beachpatrol.  Entries close on 8 July 2016.