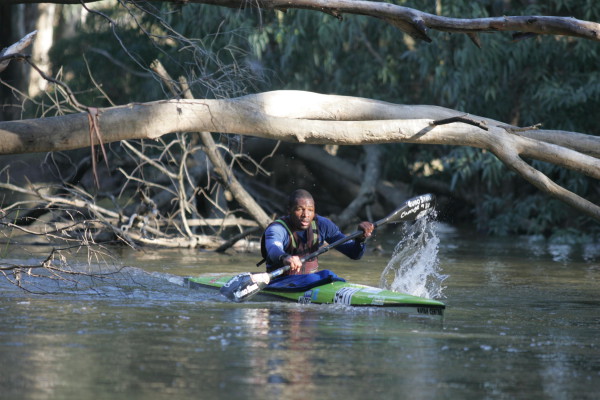 Euro Steel/Red Bull’s Sbonelo Khwela has opted out of this year’s Berg River Canoe Marathon that takes place from 15-18 July due to race’s notoriously cold and harsh weather conditions and will instead focus his energies on preparing for the Avon Descent in Australia in August. Mouton van Zyl/
Gameplan Media

The 27 year-old sensation, who stole the hearts of many of the paddling fraternity during his fairytale Dusi effort in 2013 before going on to win the iconic race with partner Andy Birkett in 2014, has tackled the Cape’s annual major on the past two occasions, securing a ninth and 13th place finish respectively.

The challenge’s notoriously harsh conditions have however seen the Shongweni Valley resident take a different tack this time around.

“I won’t be at Berg this year as I’ve realized I’m not a good friend with the cold!” chuckles Khwela.

“I went down to the Cape to do the Pink Lady Drakenstein race recently and I went okay there but I wasn’t happy the entire race because of the cold,” adds the Euro Steel/Red Bull competitor.

While the race’s exhausting 240km span is a major obstacle in itself, it is in fact the regular near-freezing temperatures, bone-chilling winds, miserably persistent rainfall and even occasional distant snow that have principally earned the race its reputation of being one of the ultimate paddling tests and something that Khwela feels it is a step beyond him this winter.

“The water itself is not too bad and the race is long but even that is okay; it’s the weather that is the problem for me!

“It’s freezing, especially in the morning, and you try start paddling when you can’t even feel your hands or your feet.

Having combined well with possible 2016 Dusi partner Banesti Nkhoesa at the recent SA Marathon Championships at Camps Drift in KwaZulu-Natal, Khwela has now turned his attention towards his next challenge – the Avon Descent in Australia.

“Red Bull are flying me out for the Avon (Descent) again this year and so I thought I’d take a break from the Berg this year and focus on preparing for Avon in August instead.

“I really enjoyed my last trip to Australia and I’m looking forward to going back there again this year; hopefully this time I can go there and get the win!”

While Khwela won’t be on the Berg River Canoe Marathon’s start line in 2015, a pedigree men’s field – including Khwela’s former Dusi partner Birkett – is expected to contest this year’s clash of the Western Cape.