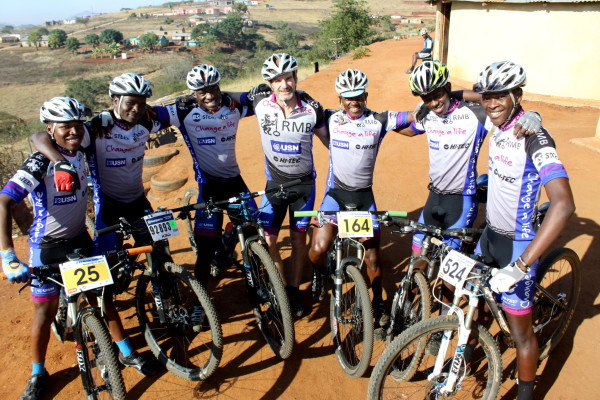 Having become a mentor to many of the up and coming riders in the RMB Change a Life Academy, ‘Dusi Duke’ Martin Dreyer will see the Valley of a Thousand Hills from a different perspective when he tackles the upcoming BSi Steel dusi2c this weekend. – Dave Macleod/
Gameplan Media

Pietermaritzburg – Having dominated the Dusi Canoe Marathon for close on a decade during the late 90’s and early 2000’s “Dusi Duke” Martin Dreyer will make a return to the Valley of a Thousand Hills, on a mountain bike this time, when he and wife Jeannie Dreyer take on the Mixed Category at the upcoming BSi Steel dusi2c starting on Saturday and finishing on Sunday.

With seven Dusi Canoe Marathon titles to his name Dreyer has got to know the Valley of a Thousand Hills better than most and with his RMB Change a Life Academy based in the valley he has the opportunity to ride the trails on a regular basis however he appreciates the new perspective that he gets from seeing the valley on a bike.

“You really get to know the valley from a different perspective when you are on a bike,” Dreyer said. “When we ride through there we manage to see the whole valley from the highest points as opposed to in a boat where you are at the bottom looking out so it adds another whole dimension to the valley experience.”

The professional sportsman in Dreyer retired when he hung up his paddles following the 2008 Dusi Canoe Marathon and although he thought that he would be back to take on the Dusi again, focussing his energy on starting his academy put an end to those hopes. However his new passion for mountain biking allows him to experience the valley he loves in a more relaxed environment.

“Cycling for me is something that I do just for fun and the consequences that come from riding are not nearly as severe as paddling so I find it a lot more relaxing when I am on my bike than when I was in my boat.

“Strangely when I finished the 2008 Dusi I really didn’t think that it would be my last and I was still feeling strong but when I started the Change a Life Academy I knew that it was going to be a full time job so I gave up the paddling.

“I was also a professional sportsman back then so the consequences were a lot higher should I wrap my boat and so I was always concentrating so much harder in the boat than when I’m out on the trails with Jeannie (Dreyer) and we try not to take ourselves too seriously,” Dreyer added.

Having ended on the podium in the mixed section of the 2015 Nedbank sani2c Dreyer has still got a competitive edge and looking forward to the dusi2c he is itching to get out and enjoying the trails that have been prepared for the riders.

“We do get a bit competitive because we are naturally that way inclined but with such a phenomenal route and some incredible bridges with natural free-flowing single track it would be wrong to not just take it all in and enjoy the scenery for what it is,” said Dreyer.

The overnight stop at the Mfula Store has added significance for Dreyer because he always knew that if he managed to get through the “Big Three” rapids on the Dusi – Gumtree, Thombi and Hippo – Mfula Store represents the point where you can relax after an exciting day’s racing.

“We used to breath a huge sigh of relief when we saw Mfula Store on the Dusi because we knew that the Big Three was behind us but the area is so remote and is in the heart of the valley that if something went wrong there it was hard to get help.

“The Mfula Store has changed dramatically and now it is a place of awesome hospitality, great food and the perfect venue to relax and swap stories about the days ride in a beautiful venue in the heart of the valley,” he explained.