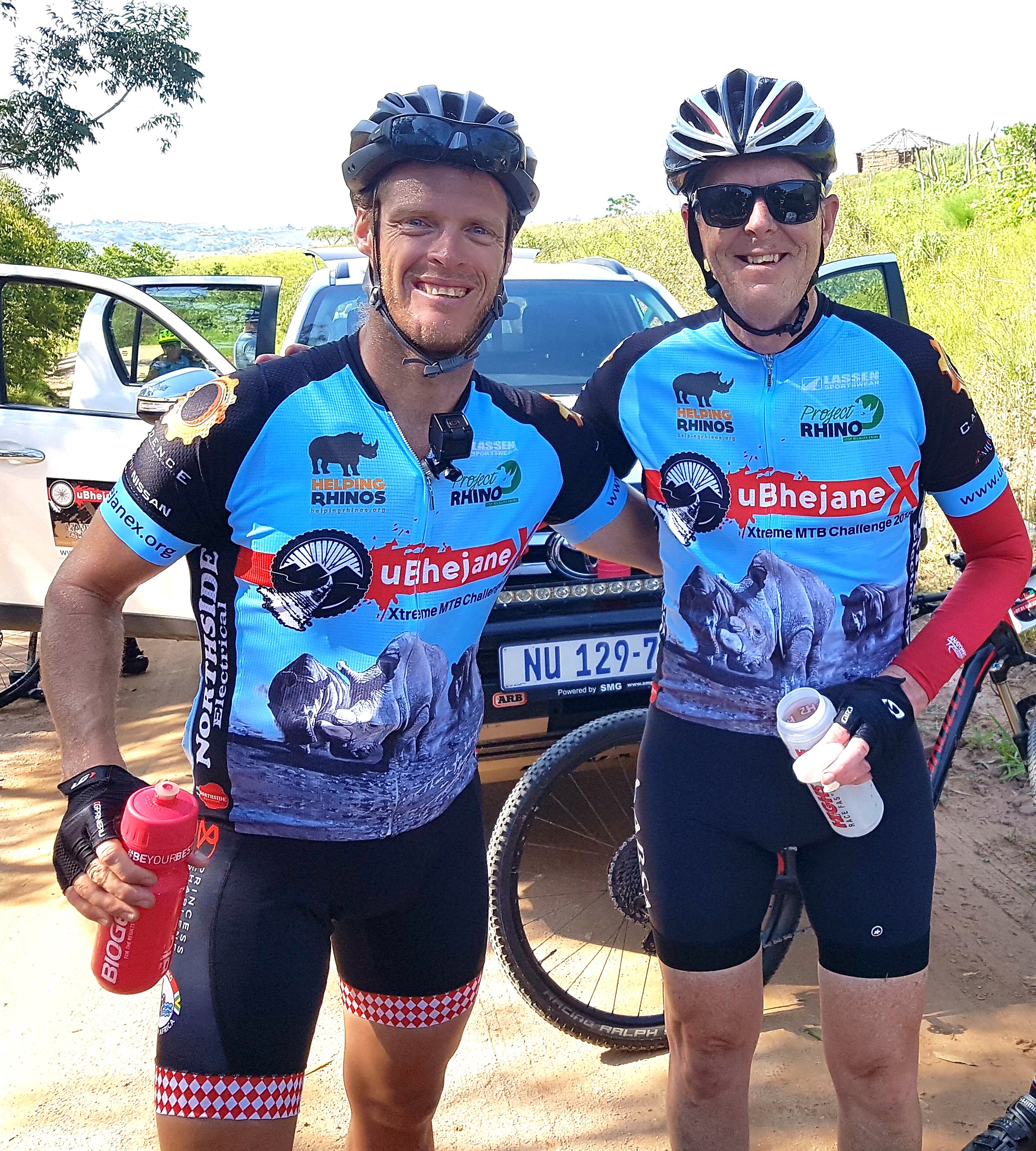 Olympian Terence Parkin (left) and Kloof cyclist Dave Duke (right) looking fresh halfway through the 140km first stageon Thursday of their attempt at a 570km ‘Ultimate’ uBhejane Xtreme MTB Challenge. “Rhino poaching is sadly at a record high, threat of extinction is real. That is why we are doing this ride. There may be no more of these magnificent beasts left for future generations,” said Duke. Grant Fowlds/
Gameplan Media

Hillcrest – The fifth edition of the gruelling Northside uBhejane Xtreme MTB Challenge formally started in Hillcrest on Thursday morning when the group of hardy men and women started the 140km first stage of the new 340km three-day ride to Hilltop Camp in Hluhluwe, braving searing temperatures on their way to the coast.

The three day option is a new innovation added to the annual fundraiser for Project Rhino and rhino conservation, designed to make achieving the full distance of the challenge more accessible to rank-and-file riders, overnighting at Zinkwazi and Empangeni.

On Saturday the balance of the field will tackle the full 340km ‘Long Horn’ ride, the 250km ‘Short Horn’ ride from the Umvoti Toll Plaza, the ‘Baby Horn’ 100km ride from Empangeni which will also form the last stage of the three day ride, and the 35km ‘Orphan’ ride from the rhino statue at the entrance of Hluhluwe Game Reserve to Hilltop camp.

Deaf ultra-athlete Parkin was brimming with enthusiasm at the challenge, and said the plight of the rhinos being poaches riled him into accepting Dave Duke’s challenge.

“Rhino poaching is sadly at a record high, threat of extinction is real,” said Duke. “Our uBhejaneX cycling shirts has a sketch of three Northern White Rhinos. That number has dropped to two now and the breed is functionally extinct, that’s how real it has become.

“That is why we are doing this ride. There may be no more of these magnificent beasts left for future generations,” he added.

At the start of the three day ride was another long-haul cyclist Ewan Cochran, who is planning to ride the 340km ride on Saturday aiming to take his total distance in training and riding for Project Rhino to 2000km, but he admitted that this lofty goal was being stymied by illness.

“I was sick for a few days which kept me off the bike, so it looks like I will finish up about 150km short,” he said.

In the 250km field will be iconic adventurer and mountaineer Sibusiso Vilane, who returns for another crack at the tough uBhejane Xtreme outing.

Former Sharks, Stormers and Springboks backline star Joe Pietersen will join in the 100km ride on Saturday, showing the passion for rhino conservation that keeps him busy at his Nkombe Rhino project and the Anti Poaching Unit.

The riders will be met at the entrance to Hluhluwe by legendary cycling commentary and the ‘Voice of Cycling’ Phil Liggett, who, with a group of riders, will join the field for the ceremonial ride of 35 kilometres to Hilltop camp.

Those interested in taking part may apply to enter, donations can be submitted and more information can be found via the event’s website, www.ubhejanex.org.