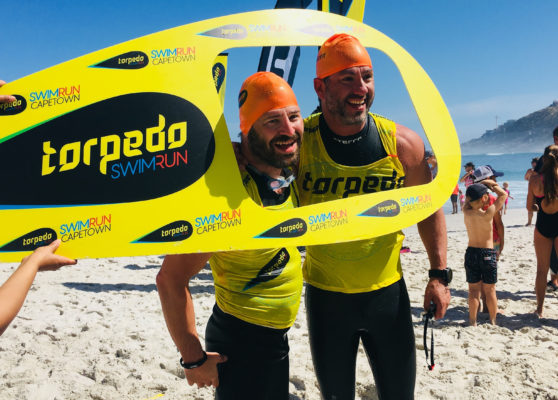 Fresh from his 79th Robben Island crossing, extreme open water swimmer Ryan Stramrood, who competed in last year’s Torpedo SwimRun Cape, has said that he and swimming partner Mark de Klerk will join triathletes and other multisport enthusiasts on the Garden Route next month to take part in Torpedo SwimRun Wild.

Torpedo SwimRun Wild, from 14 – 15 September, is the first freshwater event in the Torpedo SwimRun Series, after two Cape events last year took place in the icy Atlantic Seaboard waters and on the coastline of Cape Town. TheWild race distance is 26km, made up of four segments totaling 4km, and five run segments totaling 17km. The other 5kms are made up of “swamble”, which is a combination of scrambling over rocks and swimming.

This  is a weekend getaway that family can join, camping at the beautiful Ebb & Flow Rest Camp on the river bank in the Wilderness Section of the Garden Route National Park. On Friday evening there is a 6km prologue event followed by lamb-on-the-spit, with race day on Saturday.

Stramrood, a businessman and inspirational speaker who shares his story of pushing past impossible to swim the Ice Mile in Antarctica, says he and Mark look forward to the Wild event, after relishing the challenge of taking up running in order to do the Torpedo SwimRun Cape event: “We both love adventure which promises a bit of pain and boundary pushing, and we both love being out in nature. And this challenge will certainly deliver it all.”

Although a relatively new sport, SwimRun has taken hold and grown, with 450 races now on the international calendar. SwimRun offers off-road and open-water adventure along coastal and inland waterways, with routes designed around the natural environment and with distances varying from race to race. The multiple swim and run segments see athletes swimming and running in the same gear, with no transitions as there are in triathlon.

Richard McMartin, Torpedo SwimRun co-founder, when asked about the choice of kit for the event, said: “With a wetsuit being optional rather than compulsory as it was at our Cape events, the choice could be an important one. A wetsuit will help on the swimming legs, especially through the cold Kaaimans, but in the second half of the race the runs are long and you’ll suffer on a hot day in a wetsuit. This is what SwimRun is all about.

“It’s a race of two halves. The Kaaimans will suit agile athletes who are quick over technical terrain. The second half is more open and will suit the speed of the triathletes. If a good trail runner has a solid lead coming out from the Kaaimans, they could be hard to catch,” said McMartin.

Just such an agile athlete and strong trail runner is 21 year-old triathlete Keegan Cooke from Port Elizabeth, who last month won the Momentum Big5 Challenge in Knysna. He has entered Wild with his brother Jarryd. Keegan said: “SwimRun is a great combination of mental and physical challenge and the off-road aspect adds an exciting dimension. It’s a great way to explore places you haven’t seen before.”

The third Torpedo SwimRun Cape on 18 November has drawn competitive athletes and race entries are sold out. With R 100k in prize money for that event, it looks to become one of the must-win events on the multisport calendar, and professional athletes are encouraged to contact the organisers for a wildcard entry.

The  freshwater SwimRun in Wilderness will focus on fun and adventure in its first year, making it an ideal event for those looking to get into the sport.