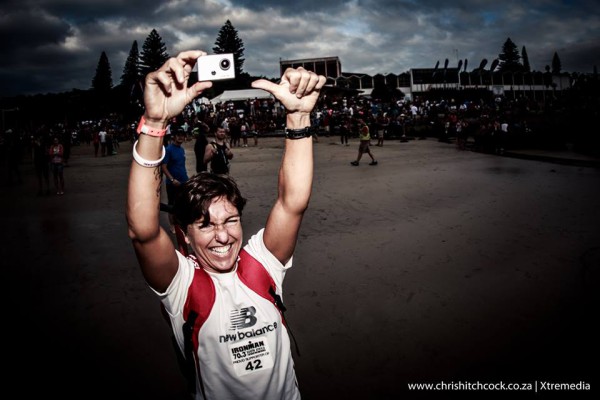 RIP Fi Xie. I’ll never forget that smile and your laugh Linda. I hope that I’ll always be inspired by your joy for life. Words from photographer, Chris Hitchcock.

It is a very heavy heart that has brought me to write this post. I am filled with sadness, as I have to come to terms that despite all our efforts, my friend Linda was turned off life support this morning and passed away. I hope to find the right words…

For those of you who were not aware, my Italian friends Edith and Linda (both world class athletes and world class people) were involved in a horrific accident with a bus on Franschoek pass last Saturday whilst out training on their bikes and were both critically injured. Linda was air lifted to Groote Schuur and Edith was taken to Paarl Medi Clinic.

Saturday evening, I was at home in Benoni (Joburg), relaxing on the couch and watching the news on TV, which is something I rarely do, when I saw the report. I immediately said to Special ‘Those are Triathletes…I know those bikes!’. I immediately had a look on Facebook and saw the terrible news posted by Alexa Cunningham, whom I immediately messaged. Saturday I did not sleep well at all, and by Sunday morning I needed to do something. The day was a blur, between chatting with angel Alexa who never left Linda’s side and Jodie&James who were attending to Edith in Paarl, I felt helpless and starting trying to make contact with the Italian Consulate and trying to track down Linda’s insurance.

Monday morning I boarded a flight to Cape Town to meet up with Linda’s parents (Gianni and Eleonora Scattolin) and Alexa who was undoubtedly exhausted. From the moment we landed in Cape Town it was a team effort. Gianni and Noretta exemplified an Italian characteristic of bravery that I could never have imagined possible. 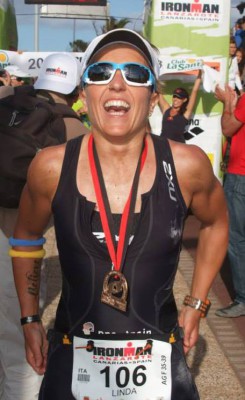 That unforgettable smile will be with us in our hearts.

As an athlete, I have always believed that if you work hard and push through limits you will always get what you want. I believed Linda would fight! There was never a doubt in my mind that if we did everything possible, we would succeed. Sadly, life is not always a situation we can control…

After getting to see her at the hospital, I totally believed in my heart that she would recover. After meeting her doctor – Dr Nick Kruger (Spinal specialist for the Western Cape), I was thoroughly convinced that she was in the best possible care. Although the initial goal was to have her moved to a Private Hospital, I can comfortably say that Groote Schuur hospital (which is where the first heart transplant in the world was performed) has some of the country, and world’s best specialists and ICU unit. Transferring Linda to a different hospital would have been a risk in her condition and would have yielded no better care than what she was already receiving. Dr Kruger is not only a committed Specialist but an amazing human being, and he personally kept us updated on her condition. Although her injuries were vast, the most serious was the damage to an artery in her neck (which halted blood flow to a part of the brain), and fractured vertebrae in her back and neck, which were the main reason for her not being moved. The operation required to stabilize her back had absolutely no impact on the blood flow to her brain, so even though the operation had to wait for a few days (due to the hospital priority list), there was also a possibility that the movement and rotation required for the operation could have affected the pressure in her head.

The analysis of what happened and the series of events seems irrelevant in light of the fact that we, the people representing the various aspects of Linda’s life – and if I listened well to her parents, she had a very varied life – have lost a very special person. I only knew Linda for a short time, but I feel it is not the length of time that is important, but rather the impact that someone has on your life. I met Linda through competing in triathlons, and together with Edith are two athletes for whom I not only respected for their achievements, but their attitude towards others. Neither of these two girls ever took themselves too seriously, always with a smile and a laugh, honest and sympathetic no matter who you were – an example to any aspiring pro! My most significant memory of Linda is from last year’s Ironman South Africa. We were both not having our most spectacular days, and it was just hard. Linda passed me on the bike, in true FiXie manner, I was not smiling, but she gave me her trademark toothy grin chatted a bit to me, and cheered me on as if we were a couple of girls out on a training ride! Well, I thought, if Linda thinks we are not doing so bad, then we aren’t! I caught up with her on the run, and even though we were battling it out for 9th and 10th place, and she wasn’t relinquishing, the attitude was exactly the same…with the only exception that I felt bad for passing her, it would have almost been more entertaining to run alongside her than getting ahead of her

My heart goes out to her parents and Edith who now have to find a reason to carry on without her.

Linda, you are leaving a big hole! I cannot bring myself to do Standard Bank Ironman SA this year, but maybe Linda would have liked for me to go an discover her favourite race in Italy??

Thank you Mama and Papa Scattolin for letting this stranger be with you at this vulnerable time. Alexa – mature beyond your years, the burden you took on was selfless and I cannot express enough what you have done for Linda and continue to do for Edith while she recovers. Jodi and James for taking care of Edith when we had to focus on Linda. Violetta from the Italian Consulate, who answered my call on a Sunday and never relented in her personal willingness to assist and show compassion. Consul Vitali, who was persistent in obtaining the information that was needed and went beyond his capacity. Dr Kruger and the whole ICU team at Groote Schuur – you are a professional and formidable team. Gavin Roberts, our lawyer, who answered my call and followed up with the first available flight to Cape Town, with such genuine concern, humanity and the best interests of the girls and their families at heart. Fred from Villa Garda BnB who has such genuine concern for the well being of Linda’s parents and Lina from Cape Tourism who took on the task of assisting and translating at the most difficult time.

To Edith, Eleonora, Gianni – may Linda rest in peace but may her spirit give you new meaning.