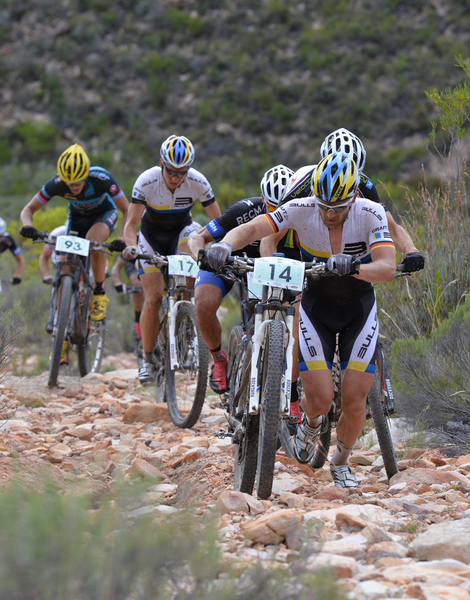 Germany’s Karl Platt, four time winner of the ABSA Cape Epic, opts to push his bike up a loose climb as he leads the front group at the 2014 Fairview Attakwas Extreme Challenge. The 2015 event is full, but the organisers made 70 charity entries available on Wednesday 5 November.
Photo credit: Zoon Cronje/Nikon/Xtremedia

You don’t just enter and ride the Fairview Attakwas mountain bike race and zip home with another finisher’s medal. Such is the event’s prestige and difficulty that you have to specifically train for it, plan it into your life (it’s not close to any large cities), start at one point, ride your heart out for hours and hours to finish at a different point and then only do you get a finisher’s medal. And then can you make your way back home. Proudly.

Sounds like a real challenge, right? Well it is. And that’s why the full name is the Fairview Attakwas Extreme Mountain Bike Challenge. And that’s why the 2015 edition on 17 January sold out its capacity of 800 entries in record time. Again. And that’s why it’s worth setting your sights on one of the 70 charity entries that will be launched today (Wednesday 5 November 2014). Only riders registered on the waiting list will qualify for charity entry package access. To register, visit www.atta.co.za.

Starting at Chandelier Game Lodge and finishing at Pine Creek Resort, both in the Oudtshoorn region of the Western Cape, the race is held over a distance of 121km with total vertical ascent of 2900 metres. Those numbers match any ABSA Cape Epic Queen Stage, but it’s the severity of the terrain and potentially extreme weather that make it an impressive feat to finish Fairview Attakwas within the 11-hour cut-off.

Some years the sun is baking hot, delivering temperatures over 40 degrees Celsius; other years it’s cool and cloudy with the possibility of rain. One thing that’s virtually certain though is that there will be wind. And it’s usually a relentless wind that blows off the Indian Ocean and which is a headwind in the final quarter of the gruelling race…

Then there’s the Attakwas. Essentially this is a 300-year-old pass over the Outeniqua Mountains that is steep with a loose surface that ranges from stony to rocky. Even the seasoned international professionals that take on the race each year lament the difficultly of finding any kind of pedalling rhythm through here. There’s good reason the word ‘Extreme’ is used in the event’s name.

Since the Robinson Pass was completed in 1869 the Attakwas Kloof region was largely unused and is now a protected area that falls under Cape Nature, boasting flourishing indigenous vegetation including proteas, waboom, ericas and other fynbos. There are also imposing natural rock formations and old historical buildings and ruins, which lead to the Attakwas being declared a National Monument in 1995.

The 70 charity entry packages coast R1400 each and comprise entry to the full race, a pre-race Klein Karoo International ostrich steak dinner with a bottle of Fairview wine and a 2014 event t-shirt. A portion of each charity entry fee will go to the Fairview Dryland Traverse Academy, which helps develop and support underprivileged local residents in both trail running and mountain biking.

While the long-distance race is full, the 52km Spur Attakwas Mini, held on the same day, is still open for entries. It’s the ideal event for those wanting to tackle the main event in future, but aren’t quite ready for it, or those who enjoy mountain biking but not at the extreme end… With a total of 1100 metres of ascent, it’s no cruise either. To enter before the rider limit is reached, visit www.atta.co.za

For more information on the Fairview Attakwas Extreme Challenge and the Spur Attakwas Mini, visit www.atta.co.za