Garmin Edge 1000: What the Connected Bike Means for Cycling 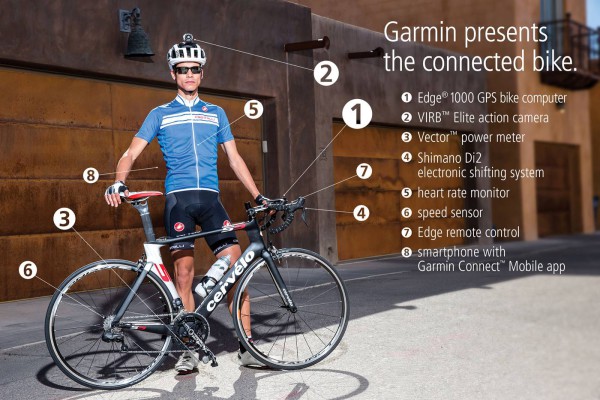 Cycling technology has come a long way since we developed our first Edge computer in 2005 and is continuing to evolve faster than ever. The same technology developments that bring connectivity to many aspects of our lives, such as high-speed data connections, low-energy wireless protocols and smaller hardware components, are changing the world of cycling as well. A connected bike and the data that can be gathered from it, can help cyclists have more fun on the road, achieve better performance, increase safety and avoid injuries.

“Crunching data has become a major part of my job and helps us decide who is best suited for a race,” said Robby Ketchell, director of sports science for the Garmin professional cycling team. “The fitness data that we are accumulating is only the beginning of a new, data-driven age in cycling that makes training safer and more effective. With increased connectivity and social media, we are provided with tools that improve the way that we look at and analyse our performance.”

The Garmin Edge 1000 cycling computer takes a major step forward toward a fully connected bike, integrating with an array of sensors, accessories and devices. It serves as a digital hub that connects to our Vector pedal-based power meter, the Shimano Di2 electronic shifting system, the VIRB Elite action camera, a Bluetooth-enabled smartphone, the Edge remote control and the newly launched Varia Bike Radar and Smart Bike Lights. Not to exclude accessories like a heart rate monitor or a speed and cadence sensor. A connected bike offering gives cyclists real-time access to valuable data and provides an opportunity to analyse cycling behavior, adjust training plans for better effectiveness, as well as track and capture rides.

The Edge 1000 is built for the conditions on a bike and controls everything seamlessly. Its 3-inch high-resolution touchscreen display is sunlight-readable and comes with an ambient light sensor that automatically adjusts brightness to changing light conditions. The Edge remote control allows cyclists to utilise their Edge 1000 without removing their hands from the handlebar.

The Edge 1000 is Garmin’s first cycling computer that integrates with Shimano Di2 electronic shifting systems to display current gear on its screen. This not only makes it easier to adjust to changing gradients, it also allows cyclists to provide useful information to bike mechanics when issues arise. The Edge 1000 will be able to collect data from the electronic shifting system, which will help riders identify the exact gear they were in during a ride, a training interval or a particular climb. They will also be able to correlate this data to power, cadence, heart rate and speed to help make better training decisions.

The Edge 1000 also pairs with our unique pedal-based power meter Vector, that measures total power (in watts), left/right balance and cadence. It is easy to install and accessible to riders of all levels as a means of data generation to improve performance. A preloaded power-based workout comes on the Edge 1000 that helps determine a cyclist’s functional threshold power (FTP), the maximum power level one can maintain through a one-hour workout without fatiguing. This allows cyclists to customise their workout program to their precise fitness level. Without this information it is easy to under- or over- train, which could make the workout less effective. The possibilities for how Vector’s unique force data could be used in the future are virtually endless. Cyclists could detect when they become fatigued, determine if they are properly fitted to their bike and measure the level of effectiveness of their pedal stroke plus more.

The Edge 1000 offers a suite of connected features when paired with a cyclist’s smartphone and the Garmin Connect Mobile app. The LiveTrack feature, allows friends and family to follow races and training activities in real time. Cyclists can invite followers using email or social media, so they can view live data on a Garmin Connect tracking page on a smartphone, desktop or tablet. Once they receive an email invite, they can click to follow and see cyclists’ stats like speed, distance, heart rate (optional), cadence, power (optional) and location on the map. If riders go out for a solo early morning ride, LiveTrack can give loved ones the peace of mind knowing where they are at any time. The Garmin professional cycling team uses the LiveTrack feature during training rides, to give team management and coaches a real-time look at their efforts.

New social media features allow cyclists to compete in unique and fun ways. After a ride, cyclists can instantly share and analyse their workout or race on the Garmin Connect Mobile smartphone application. Garmin Connect is our our free online fitness community, where users can analyse their workout, share them with others and leave likes and comments. The Edge 1000 segments feature also allows riders to compete and challenge themselves on segments from Garmin Connect. Segments are portions of a ride that users can save or download in Garmin Connect to see how they perform compared to others. Each segment has a leaderboard that shows who was able to achieve the best performance. With the Edge 1000, cyclists can even download segments to their device to virtually race their previous best, the current segment leader’s time or another rider’s time.

The Edge 1000 can act as a remote to start/stop recording and take stills with the VIRB Elite action camera, allowing cyclists to capture HD videos of their rides. VIRB Elite comes with various mounting options so cyclists can easily mount the Virb Elite to their handlebar or a helmet. What makes the VIRB Elite stand out for cyclists is its ability to record data from built-in and connected sensors, such as heart rate, speed, altitude, G-Force, cadence and power. Cyclist can display this data in the video as an overlay, which is a great way to capture, relive and analyse rides. The free VIRB Edit software makes it easy to share videos with family and friends via social media.

Varia is a line of smart cycling devices including, a first-of-its-kind rear-view bike radar and smart bike lights. The aim of the range is to help create a safer cycling environment. Varia rear-view bike radar warns cyclists of vehicles approaching from behind from up to 140 meters away. The radar display unit will display up to eight vehicles on the Edge 1000 and indicate the increasing risk to the cyclist as they approach.

There are two Varia Smart Bike Lights available, the Varia headlight beam and the Varia tail light. The Varia headlight beam automatically projects light further ahead of the cyclist at faster speeds or closer as a rider’s speed decreases, lighting the road where cyclists need it the most. Varia connects with the Edge 1000 and uses data like speed through the GPS data to enable this. The Varia tail light operates in solid and flashing modes and increases intensity when cyclists decelerates to warn approaching traffic. By adding a second tail light cyclists, can utilise turn signals, which can be controlled through the Edge 1000.

Garmin’s connected bike technology is leading the way in the cycling fraternity and will continuing to evolve in years to come.  The Garmin Edge 1000 cycling computer is available for the recommended retail price of R10 899 and can integrate with an array of sensors, accessories and devices. It serves as a digital hub that connects to our Vector pedal-based power meter which retails for R 21 249, the VIRB Elite action camera which retails for R 5 499 and the newly launched Varia Bike Radar which is available for R2699 and Smart Bike Lights for R2999 (headlight) and R999 (tail light). A connected bike offering gives cyclists real-time access to valuable data and provides an opportunity to analyse unique cycling behavior so cyclists can adjust training plans ensuring better effectiveness. Find your edge with the Edge 1000 and Garmin’s connected bike.