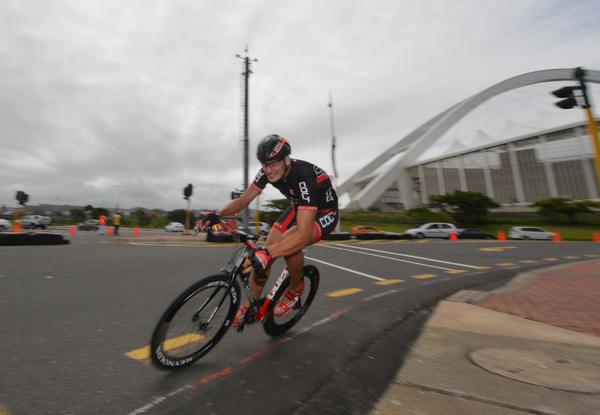 Durban’s striking promenade set the stage for the third and final round of the Engen Cycle in the City criterium festival. It was a repeat victory for both Dylan Girdlestone (Bonitas) and Lise Olivier (Time Freight VeloLife) who claimed the Street King and Queen titles in style.

It was the howling North Easter that wreaked havoc on the elite men’s and women’s races blowing both apart soon after the start. In the men’s race the main protagonists were team Abantu and team Bonitas who sent riders off the front leaving it to the other teams to do the chase. The tactical move by Bonitas paid off when the chasing peloton ran out of steam and Girdlestone managed to shake his fellow escapee to take his second consecutive Street King crown.

Defending champ, Maroeshka Matthee, put in a sterling performance but the teamwork by the Time Freight VeloLife ladies eventually snapped the elastic and saw the winner of the Pretoria leg, Lise Olivier, escape off the front. Olivier showed her class and successfully soloed into the headwind to claim yet another Street Queen crown.

Despite the dismal weather the event still drew over 500 entries with its various categories. Crowd favourite, the Fixie Flatbox category, saw riders take the course with single geared bikes and no brakes at breakneck speeds. The ever popular and colourful Crazy Cranks category did not disappoint with the fun costumes and coinciding smiles from both the crowd and participants.

Spectators were not left out as the event boasted a craft beer garden, I Heart Market food stalls, kiddie’s entertainment and more. Chart topping local band, Monark, closed proceedings bringing the perfect blend of entertainment to the action that is the Engen Cycle in the City.

Because children matter, Engen will be donating 100% of all entry fees across all three regions to selected children’s charities in the respective regions.