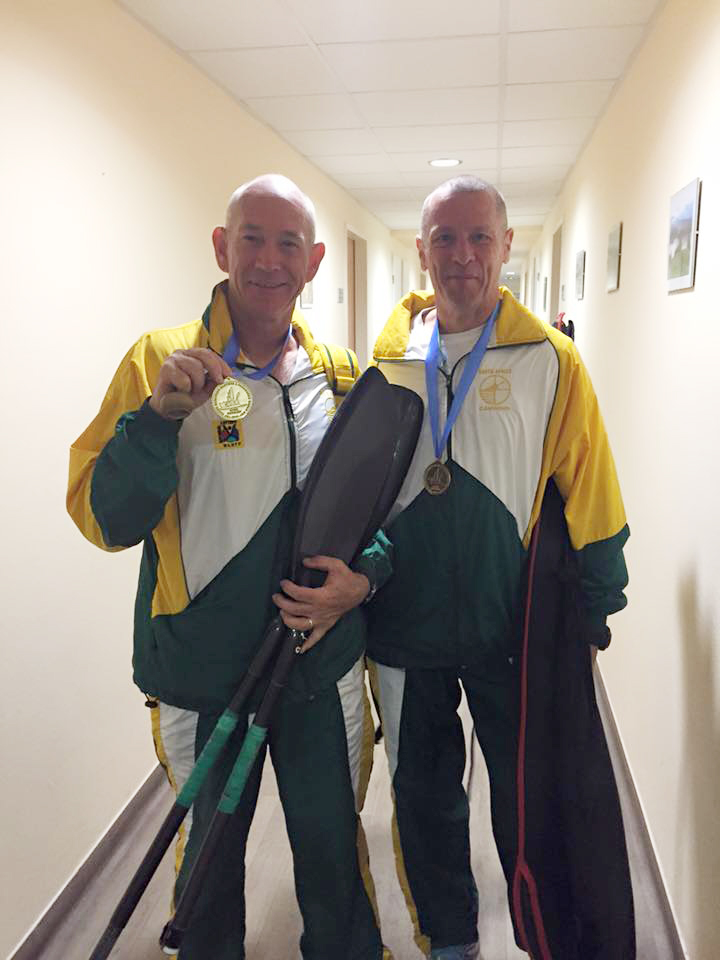 It was another great day for Team South Africa and for the Men’s 55-59 K2 pairing of Bruce Weneke (left) and Linton Hope (right) who stormed to victory in their age category on the final day of the 2015 ICF Masters Marathon World Cup in Győr, Hungary on Thursday.

Győr – Team South Africa’s Veteran and Masters paddlers added a further ten medals to the team tally on the final day of the 2015 ICF Masters Marathon World Championships in the Hungarian town of Győr boosting the age group paddlers total to eighteen medals over the K1 and K2 races, and easily bettering the twelve medals earned at last year’s Masters Cup in Oklahoma City.

The K2 racing started of strongly for the South African team as the pair of Van Riets, Ernest and Louw produced the first medal of the day after they fought their way to a bronze medal in the Men’s 35-39 K2 event.

They were followed closely by the two ladies pairs that both had medallists from the day before. It was another golden day for Marion Young as she claimed her second gold medal after she paired up with Ronel Stevens in the Women 40-44 K2 event whilst another day one podium top stepper Lis Hart followed that with a silver in the Women 45-49 K2 with her partner Lisa Scott.

Marion Young commented on the mornings racing saying that it was the plan to sit tight during their K2 race and make sure that they held the advantage going into the final lap where they hammered home to claim the gold.

“We managed to get the jump on the Spanish pair (different age group) after the second portage and when we managed to get ahead we just kept the pressure up,” the double gold medallist mentioned. “The support from the South African team on the banks was unbelievable and it is very encouraging going into the weekends racing!”

The afternoon session also began well for South Africa with Bruce Wenke and Linton Hope powered home to take the gold medal in the Men 55-59 K2 race by by a massive seven minute margin from a duo of Spanish K2’s who rounded off the podium.

The medals did not stop there as one of the most hotly contested K2 events of the day produced another silver medal for South Africa with Colin Wilson and Nicolas Oldert finishing second in the Men’s 50-54 K2 race. The pair unfortunately just missed out on the gold medal in an end sprint that saw them pipped by half a second.

The women in the team continued to produce the goods for Team South Africa as they registered another gold as well as a silver in the same race with Hilde Lapere and her Australian partner Margaret Böhm taking gold followed by Elizabeth Russell and Mary Burton who snatched up the silver medal in the Women’s 55-59 category.

The team had to time to get one more medal as Brian Longley teamed up with Danish paddler Svenning Jörgensen to claim silver in the Men’s 65-69 K2 race.