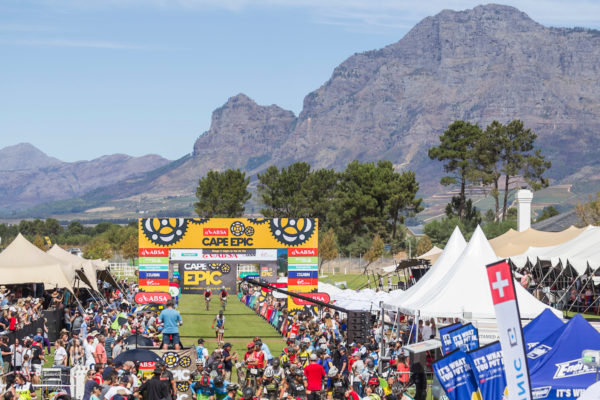 The Absa Cape Epic’s Grand Finale found a new home in 2017 … and now it is going to stay there.

The acclaimed Val de Vie Estate proved to be a popular and successful host for the final stage finish of this year’s race. Now the Estate has joined the Untamed African MTB race’s sponsor family and will be the Grand Finale venue for at least the next five years.

Absa Cape Epic founder Kevin Vermaak added: “Val de Vie is a fantastic Grand Finale venue: it is a beautiful estate, located in an awesome setting in the middle of mountain bike territory.”

“The 2017 Grand Finale was a great success and we now believe that Val de Vie can become an iconic venue in the way that the Champs-Élysées is associated with the finish of the Tour de France.”

He explained that the relationship was being upgraded from venue partner to sponsor: “This is an indication of the great relationship we forged this year and we really hope to extend it beyond the five-year contract we have now agreed.

The Absa Cape Epic route changes every year but the Grand Finale – and the last few kilometres – will take place on Val de Vie. This will take riders through the Estate’s fynbos gardens in the beautiful Paarl-Franschhoek Valley and on to the polo field finish.

Besides being the venue of the most prestigious stage finish in world  mountain biking, Val de Vie will provide the sparkling wine used for finish line celebrations – as seen on the live television broadcast each year. It will also display Absa Cape Epic memorabilia at the Val de Vie Club House.

The  Estate logo will feature on finisher medals … and might there be a Val de Vie ‘Grand Finale Reserve’ in the pipeline?

To find out more about the Val de Vie Estate go to www.valdevie.co.za