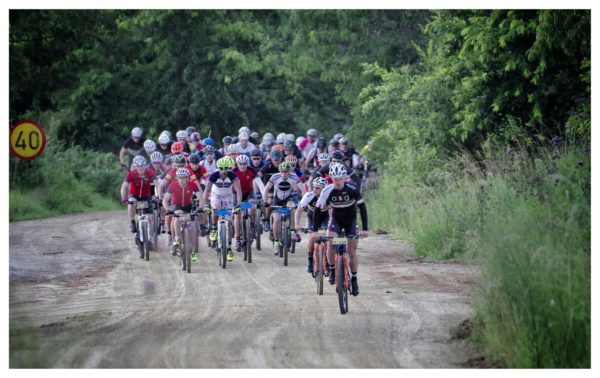 Travis Walker (front) and teammate Pieter Seyffert (Ellsworth-ASG) lead the pack on Montagu Pass on the second day of the TransCape mountain bike race. The queen stage of the seven-day journey from Knysna to Franschhoek took the riders on a 135km ride between George and Van Wyksdorp. Photo: Jacques Marais

After a rainy opening stage, riders were presented with different conditions today as pace-setters Pieter Seyffert and Travis Walker consolidated their overall lead in the TransCape mountain bike race.

The Ellsworth-ASG duo led the field home for the second consecutive day after a typically hot and dusty Karoo leg between George and Van Wyksdorp.

Belgians Eddy Feliers and Kristof de Neys (Cicero Baik) hung on to their second place overall after placing second on the stage in 5:40:42 for a total time of 9:23:25.

They were chased all the way home by David and William Wertheim Aymes (Bromance), who stopped the clock on 5:45:12 to remain in third overall on 9:27:55.

After creating a decent buffer on the opening stage, the 30-year-old Seyffert from Helderkruin on the West Rand said they had planned to ride within themselves on the second day.

However, his younger partner could not contain his competitive juices and they quickly opened up a gap on Montagu Pass where the gradient kicks up to 14 per cent in places.

“Although the intention was to take it slightly easier, I got a bit excited going up Montagu Pass,” admitted the 25-year-old Walker from Hilton in KwaZulu-Natal.

“Going up the pass the breeze was into us, so climbing was a bit slower than usual. About halfway up I rode to the front and from there we were by ourselves for the rest of the stage.”

Tongue firmly in his cheek, Seyffert said he would speak to the organisers about the pace his partner was setting and for “always putting me in the hurt box”.

“Jokes aside, he’s an awesome teammate, waiting for me on all the climbs. He rides from the front most of the way and I’m learning to pull myself inside out to keep up with him.”

Seyffert, who will target the Cycling South Africa-sanctioned Bestmed Tour of Good Hope road race in the Cape Winelands next month, said the heat combined with the wind had made the lengthy stage a tester.

“We had a headwind for most of the day, with a slight tailwind for the last 10 to 15km. It was very hot towards the end with the wind at our backs.

Although Montagu Pass – which the peloton faced shortly after the start –was the major ascent on the day, Seyffert said the smaller climbs later on presented more of a challenge.

“From about 80km onwards you get those district roads and rolling hills, which I found much tougher. And then, right at the end, the organisers have put in a nasty little 1km climb as a final challenge.”

In the men’s solo category, defending champion Billy Stelling came through strongly to take the stage in 5:40:46 to move in to third overall with an aggregate time of 9:59:22.

Belgian overnight leader Karl Dossche remained at the head of affairs after placing second in 5:51:23 for a total time of 9:39:38. Alan Tilling completes the overall podium on 9:52:40.

The third stage of 81km will take riders over two major climbs between Van Wyksdorp and Riversdal.