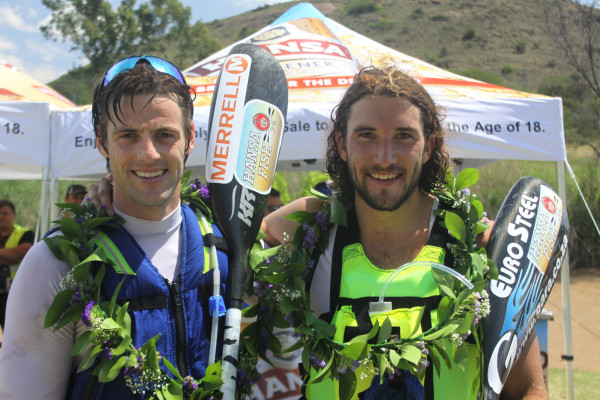 Cradock – Greg Louw has written his name into the Hansa Fish River Canoe Marathon record books by becoming the first Eastern Cape paddler in seventeen years to win the event that doubled as the 2015 South African K2 Championships after he and Andy Birkett maintained their overnight lead while Abby Solms and Anna Kožíšková successfully defended their women’s title in style on Saturday.

Louw (Knysna Racing/Merrell) takes over the mantle from Daniel Conradie who was the first across the line back in 1998 and the fairytale result carried even greater significance after Friday’s opening stage which saw Birkett celebrate his birthday before Saturday marked Louw’s father, Butch’s birthday.

“It’s nice to get a win on a river that I’ve been paddling on since I was nine years old and obviously to get the win with a good mate like Andy (Birkett) makes it even more special!” said Louw.

“Andy and I decided to try hold the guys off this morning and when we got to Baroda bridge we heard we’d pulled a bit of time and so we put our heads down and went for it and that extra motivation was great,” he added.

Louw and Birkett enjoyed a flawless opening stage that handed them an overnight lead of two and a half minutes over rivals Hank McGregor and Jasper Mocké and the pair called on all their experience as a combination as well as Louw’s local river knowledge to claim the memorable victory.

“This is a really special victory!” said Birkett (Euro Steel). “Greg and I have had a tough year; we’ve really put in a lot of effort and haven’t got some of the results we wanted so to pull off a win a Fish is a bit of a surprise but a really nice end to the season!”

McGregor (Jeep Team/Kayak Centre) and Mocké (Mocké Paddling) put in a brave effort throughout the two day clash but in the end the effect of the long haul back from the ICF Ocean Racing World Championships in Taihiti was just too great and the pair had to settle for a deserved second place.

Macsteel Maestros’ Brandon van der Walt and Stu Maclaren started the day side-by-side with ‘Fisher King’ Len Jenkins and Soweto Canoe and Recreation Club’s Siseko Ntondini and the two crews enjoyed a monumental tussle up until Jenkins and Ntondini edged ahead shortly before Chicken Run where Van der Walt and Maclaren ploughed into a rock and snapped their pedals.

As ADreach’s Jenkins and Ntondini surged on to claim a remarkable third while Van der Walt and Maclaren’s misfortunes opened the doorway for Czech Republic’s Jakub Adam and Michael Odvarko to cross the line in fourth ahead of the Cape youngsters.

“I was quite surprised by our third; out of everyone I think I was the most surprised!” chuckled Jenkins afterwards. “Hats off to Siseko, he had all the fitness in the boat and I think I just added the experience!”

The women’s race was the Solms and Kožíšková show from start to finish as the unstoppable duo added a further six minutes to their near nine minute overnight buffer to retain the title they claimed so handsomely in 2013 together.

“We had such a good race, everything worked out perfectly from start to finish and managed to pull off the win again,” said Solms. “We were even in there, racing with the guys quite hard today up until Gauging Weir when we dropped off the pace a bit and recomposed ourselves.”

“I tried to keep up my training after Marathon Worlds and then I came one week before Pre-Fish, which helped us so much during the race!” explained Kožíšková, the recently crowned Marathon World Champ. “The river is completely different to flatwater marathon but I have really enjoyed it and Abby is the best driver!”

Olympic bronze medalist Bridgitte Hartley and surfski sensation Michelle Burn continued their success as a combination as they claimed second place while Epworth school girls Cana Peek and Donna Hutton had done enough on Friday’s opening stage to claim third place overall despite Under 23’s Jenna Ward and Kyeta Purchase (MacSquad Elite) finishing ahead of them on Saturday.

The age group tussles saw Murray Starr and Louis Hattingh as well as Ward and Purchase claim the under 23 spoils respectively while Peek and Hutton were joined by Brandon Orpwood and Jarryd Gibson as junior winners.

A strong showing by Western Cape Canoe Union saw the Inter-Provincial title head to the Mother City and surrounds.

For more information go to www.fishmarathon.org.za