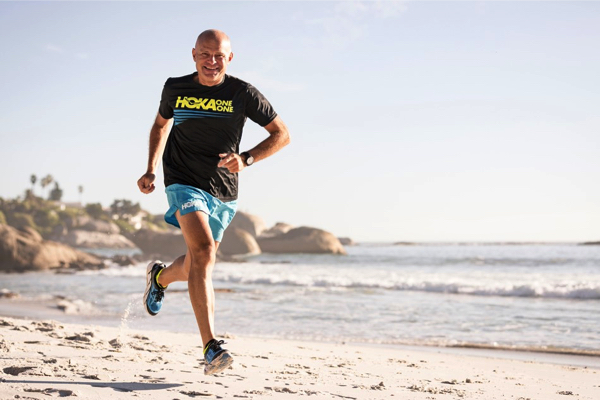 HOKA ONE ONE, the world’s fastest growing premium running shoe brand, made its long-awaited official launch into South Africa at the end of July. But it was more than just a launch, it was also a spiritual journey for Hoka co-founder, Nicolas Mermoud.

The Frenchman, who in 2009 co-founded the brand with compatriot, Jean-Luc Diard, completed two very strong connections between the brand and South Africa, when he ran down the slopes of Table Mountain to Clifton Beach in Cape Town.

Hoka One One – pronounced ‘Ho-kuh Oh-nay Oh-nay’, which is Maori for ‘to fly over the earth’ – bucked the global running shoe design trend, by offering generous, yet super-light soles when most established running shoe brands were finding new, complex ways to design slim, minimalist soles to give runners a more ‘natural feel’.

Mermoud and Diard were inspired to try a new shoe design when they were about to run down a rugged mountain trail.

“We were dreading the run down, when we should have been looking forward to it. It was then that we decided to design a shoe that would make us feel like we were flying down the mountain. A feeling of weightlessness. A feeling of freedom,” explained Mermoud.

The result was a running shoe with an oversized sole that looked chunky, but was surprisingly light and stable.

“The larger size trend isn’t unique to Hoka though as snow skis, mountain bike tyres and tennis rackets have all seen improvements in performance with increased surface areas,” Mermoud told South African media and retailers at the launch.

“We spent many, many hours working on creating a sole that would feel light, but offer a high level of cushioning. We shaped the midsole like you shape a surfboard to ensure the sole also offers maximum stability, which is very important, especially when you’re running on trails,” added Mermoud.

Early tests showed the average times in Hoka shoes to be five seconds faster than other more traditional-design shoes over a section of descending mountain trail that was taking 25 seconds to cover on average. A 20% improvement!

Excited by this improvement, Mermoud and Diard took their early prototypes on a trip to the United States where among others, they met with former South African marathon aces, Johnny Halberstadt and Mark Plaatjies, both now successful running coaches living in Bolder, Colorado.

“Johnny and Mark were very interested in our shoes and said they were very concerned with the trend towards more minimalist sole designs, which they felt were the cause of many running injuries. They tried our shoes, loved them, spread the word and that’s how we got our start in North America,” said Mermoud.

But that’s not the only South African connection to the Hoka brand. Mermoud and Diard decided to name the models of their first shoes after famous beaches. Halberstadt recommended they name one of the models Clifton, after the beautiful Clifton Beach in Cape Town.

“It’s really amazing to run in Cape Town and on the beautiful Clifton Beach. This journey for me to South Africa has been very fulfilling from a personal and business perspective and it most certainly won’t be my last visit,” smiled Mermoud.

The Clifton, primarily a road-running model, has since become Hoka One One’s most successful model, both in terms of sales and recognition.

The Clifton, a neutral shoe designed for racing and fast workouts, has won a number of awards, including:

The Clifton has just had its second refinement with the launch of Clifton 3, which has a slightly wider forefoot area than the Clifton 2 with more upper mesh fabric and a more padded tongue. It still retains its ultra-cushioned, lightweight neutral midsole that offers its now familiar ‘cushy ride’.

Mermoud, a committed runner, speaks about his brand with an infectious passion. It’s hard not imagine yourself running on the soft, highly cushioned soles and that’s why Hoka South Africa will be introducing test fleets of selected models later in 2016.

“It’s hard to explain to someone how it feels to run in Hoka shoes. We want everyone to be able to try it. We invented maximalism. Now we have competitor brands mimicking that. This is flattering, but we haven’t actually stopped innovating and now have Hoka models for every category of running. It’s like a good news story that just keeps spreading. We are excited to introduce Hoka to emerging markets and ask South Africans the question we asked ourselves on that mountain top in 2009: ‘why run when you can fly?’” grins Mermoud.

For more information on Hoka One One, visit www.hokaoneone.com.

Tagged with: featured HOKA ONE ONE