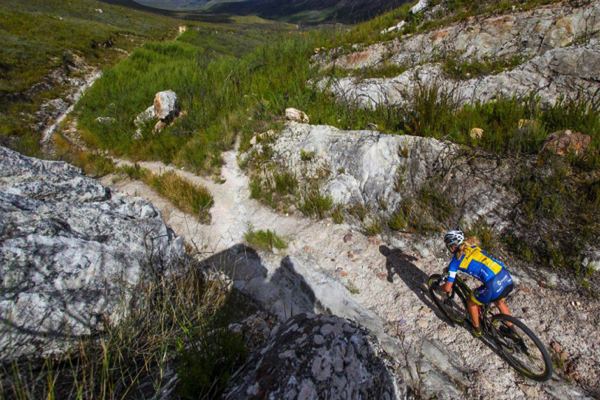 Swedish marathon champion, Jennie Stenerhag, tackles the rugged trail through the Attakwas Reserve on her way to third place in the 2015 Fairview Attakwas Extreme Mountain Bike Challenge. Stenerhag joins a strong field once again on Saturday to tackle the 10th anniversary edition of one of South Africa’s most iconic one-day mountain bike races.
Photo credit: www.oakpics.com

The 10th Fairview Attakwas Extreme Mountain Bike Challenge kicks off the South African mountain bike racing year on Saturday and it has once again attracted a strong field of contenders for the overall men and women’s titles.

The only previous men’s race winner in the field is Matthys Beukes (SCOTT LCB Factory Racing), who lives in the area and is focussed on adding a second title to his CV. With 2900m of vertical ascent and a section through the Attakwas Reserve over rough, steep terrain, it’s considered one of the most demanding one-day races in South Africa.

Heading up the men’s contender list is four-time Cape Epic winner, Karl Platt. The Team Bulls rider has finished on the podium numerous times, but has yet to secure the victory at the Attakwas Extreme Challenge. He will be joined by compatriots and Team Bulls stablemates, Tim Bohme and Simon Stiebjahn, winners of the 2014 Cape Pioneer Trek international stage race, which takes place in the same region in October each year.

“My form is quite good after a solid December of training, but the first race is always an unknown – not just for me, but for everyone,” said Beukes. “I have spent a lot of time in the gym in December and January working on developing my power. I’m keen to see how that will work out for me.

“There are some experienced, strong riders in the field and I know it’s going to be a tough race. My teammate, Gert (Heyns) finished third last year in what was his first ultra-marathon. I think he will be a rider to watch for sure. But he’s certainly not the only one,” added Beukes.

In the women’s race, Kleinhans will have to hold off the powerful Ascendis Health pairing of Robyn de Groot, the South African marathon champion, and Jennie Stenerhag, the Swedish marathon champion. Stenerhag led the race last year until multiple punctures saw her title challenge fade. She finished third behind De Groot.

“I have had a good training period since the beginning of December. I obviously know this race course very well and I guess it will be a matter of doing as I have done before – prepare myself mentally for all possible scenarios and then hope that physically everything goes well,” said Kleinhans.

“I feel that Robyn (De Groot) and Jennie (Stenerhag) will be as strong, if not stronger than last year and my main rivals again. I’m looking forward to racing for my new Team Spur set-up. I have great people around me and excellent support, which is important,” added Kleinhans.

Laws, a former Cape Epic winner and runner-up at Attakwas Extreme Challenge in 2013, is a British road racing pro for the Podium Ambition team, who has been training in South Africa since December.

For the first time, Kevin Vermaak, founder of the Cape Epic, will be participating in his own event and has chosen to do his first Attakwas Extreme Challenge as part of his preparation. Other significant names on the start list include former Springbok rugby players John Smit and Butch James, both now committed mountain bikers.

Warm, sunny weather is predicted, along with a breeze off the ocean that becomes a headwind for much of the final 40km. This means the men’s record of 04 hours 47 minutes and 46 seconds, set by Urs Huber in 2014 is likely to remain in place. The women’s record of 05:30:58, set by Kleinhans last year, looks more vulnerable though, based on the increased depth of the women’s field.

Entries for the Fairview Attakwas Extreme Challenge sold out within half a day. However, for those keen to sample the event, there’s a relatively challenging 52km Mini Atta, presented by Spur. Late entries (with a late entry fee penalty) can still be done until race day.