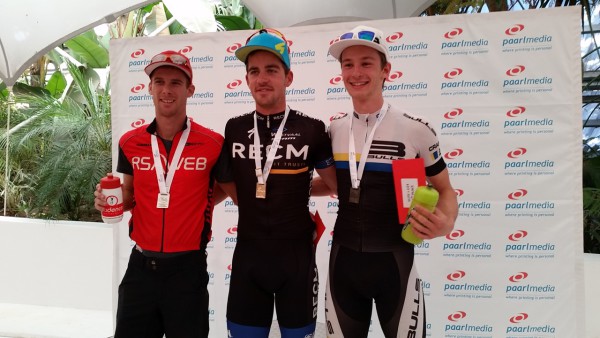 James Reid, fresh from stage race wins at Trans Hajar in Oman, and Tankwa Trek in Ceres, continued his 2015 winning streak at the second round of the Western Province XCO series held at Rhebokskloof Wine Estate this past Saturday.

“This weekend I enjoyed my first XCO race of the year – it’s quite difficult to put enjoy and XCO into the same sentence, but it was a good experience ahead of Nationals next weekend.

“I’m feeling fairly explosive considering all of the endurance training and racing recently, but over then next few weeks my focus is changing towards the shorter discipline of the sport. It was good to go hard from the start and negative split my lap times towards the end.” said Reid.

James will be racing in the first round of the SA XCO Cup in Port Elizabeth this coming weekend, the Men’s Elite race starting at 14h00 on Saturday, 28 February.

“Next weekend is a big one. I’m excited to be competing with some of the fastest guys in the country and see how I shape up. I’m really happy on the Specialized Epic World Cup, even on the tighter harsher courses. Next weekend is an important step in the build up to the USA Cup races during March.”