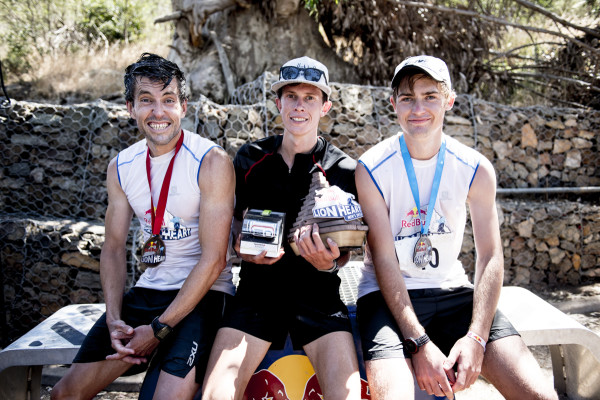 “I’m very happy to take the win,” said the Potchefstroom law student after the final, “I came here on Thursday and went up Lion’s Head for the first time ever, that made a big difference because I knew which lines to take,” he commented.

The big story on the day was the new format, and the short recovery periods between elimination heats. “The top 100 men were assigned evenly (depending on qualifier time) to one of four groups of 25 to run the up-and-down route once against the clock,” explained race director, Ryan Scott. “Every one of these who went under the cut-off time of 36 minutes made it through to the next round,” he explained.

These qualifiers were then split into a top and bottom half, with the top half racing for the Elite title and the bottom half, the Plate category. Runners had only a maximum of seven minutes’ rest between quarters and semis; and again between semis and finals. The new format made for exciting tactical racing that had the spectators glued to the live monitor at the base of the mountain. It also meant that at the end of the day, the winner would’ve summited the iconic Lion’s Head four times.

Van Heerden – who is the reigning South African Long Distance Trail Champion – played an excellent tactical game, holding back during the elimination heats on the way to the final. “I went hard on the way up and took it easy on the downhills,” he said. “Because it was so hot, I still cramped on the way down in the final even though I wasn’t pushing too hard earlier in the day. I knew the final was not going to be that fast because of the high temperature and the short recovery times,” he said.

The top 30 women also qualified based on Strava leaderboard and it was newcomer Hayley Preen who claimed the title in a time of 0:34:12, beating 2012 winner Megan Mackenzie into second. 2014 defending champion Landie Greyling did qualify for the final, but opted not to run, citing a niggle in her knee.

“It was good, but very hot and tough,” commented a visibly exhausted Preen right after the finish. “This event tests both your uphill and downhill strength,” she said. “Downhills aren’t my strong point, so I came here expecting a podium at best, I’m very happy with the win.”

The men’s plate race was won by Matthew Henshall in a time of 0:40:04. In second place Marlowe Brett. Brett showed up at the event this morning without his running shoes and had to borrow a pair before the start.