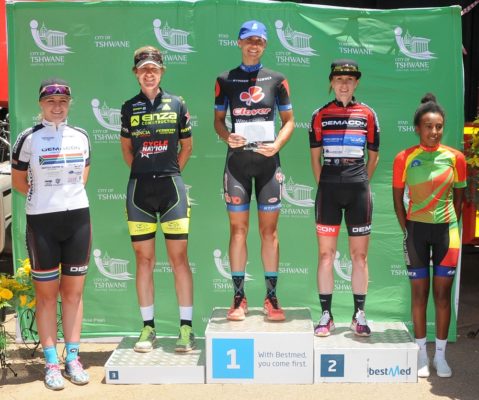 Chris Jooste and Yzette Oelofse collected the biggest victories of their careers at the inaugural Tshwane Classic road cycling race that took riders through the heart of Pretoria today.

The 98km feature event, which started and finished at the Voortrekker Monument, saw around 4 000 participants blitz past all of the city’s major attractions on a balmy but windy morning.

Jooste, who lined up alongside pro teams such as BCX and RoadCover, said he took advantage of being a “no-name” brand.

“I didn’t really know what to expect but I knew my legs were good so I just went to try my luck today,” said the 22-year-old, who grew up in the small Western Cape town of Prince Albert before moving to Kliprivier in the south of Johannesburg.

“As it was the first event, nobody really knew what to expect,” said the Gauteng U23 road and time-trial champion.

“We definitely didn’t expect it to be such a windy day out on the highway. That made a big difference.”

Jooste said he took his time to settle in and sat comfortably in the bunch until he and RoadCover’s Bradley Potgieter, ProTouch’s Pieter Seyffert and four others set off in pursuit of two riders who had broken away roughly 40km in.

Their efforts were rewarded shortly before the first major ascent and together the growing group started climbing to the finish.

“Coming into the last 30km it gets tougher and tougher,” explained Jooste. “When we started the first climb, going over the ridge, I put in some effort and split up the group.”

Then, on the Tom Jenkins climb, roughly 87km into the race, he decided it was now or never and put in a final effort to try and distance himself from his fellow escapees.

“At the top I had about 100m on them and I just had to keep pushing until the end,” said Jooste, who collected the white jersey for best young rider after placing fourth overall at the Mpumalanga Tour in January.

He crossed the line in 2:12:57, a minute ahead of ProTouch’s Jaydé Julius and Dimension Data’s Kent Main, who won the Bestmed Tour of Good Hope earlier this year.

“I always go to a race to do my best so it’s wonderful to get this result,” said Jooste. “I never expected coming here to win so it’s definitely a great feeling.”

“It wasn’t just for the climbers. There were a lot of downhills and many places where sprinters and bigger riders could get away, so it was a combination of being strong and taking chances where you could.”

Jooste commended the organisers, metro police and City of Tshwane for their efforts.

“It was fantastic to have full road closure. It is a wonderful initiative to bring a race like this to Pretoria.

“You have the Cape Town Cycle Tour and 947 Cycle Challenge in Joburg, and now we have this.”

Oelofse – who placed sixth at the national road champs – said victory in her hometown had been her goal from the start, but, with just one teammate to help her, she knew she would have her work cut out for her.

The Clover rider said the racing only really started for her at the 60km mark after the peloton reeled in a breakaway of two riders who had been at the head of affairs for 40km.

Shortly afterwards, she and Demacon’s Carla Oberholzer were able to slip away when the road started tilting upwards.

It became a game of cat and mouse as the Bestmed Satellite Championship winner dropped Oelofse twice, only to see the 32-year-old fight back on each occasion.

The latter finally counter-attacked 500m from the finish and turned herself inside out to win in 2:41:09.

“There’s just unbelief and shock because I’ve been on the podium so many times this year, but I’ve never managed to get the win. I’m over the moon.”

Oberholzer finished on her wheel to take second in the same time, while Cashandra Slingerland completed the podium just under half a minute down.