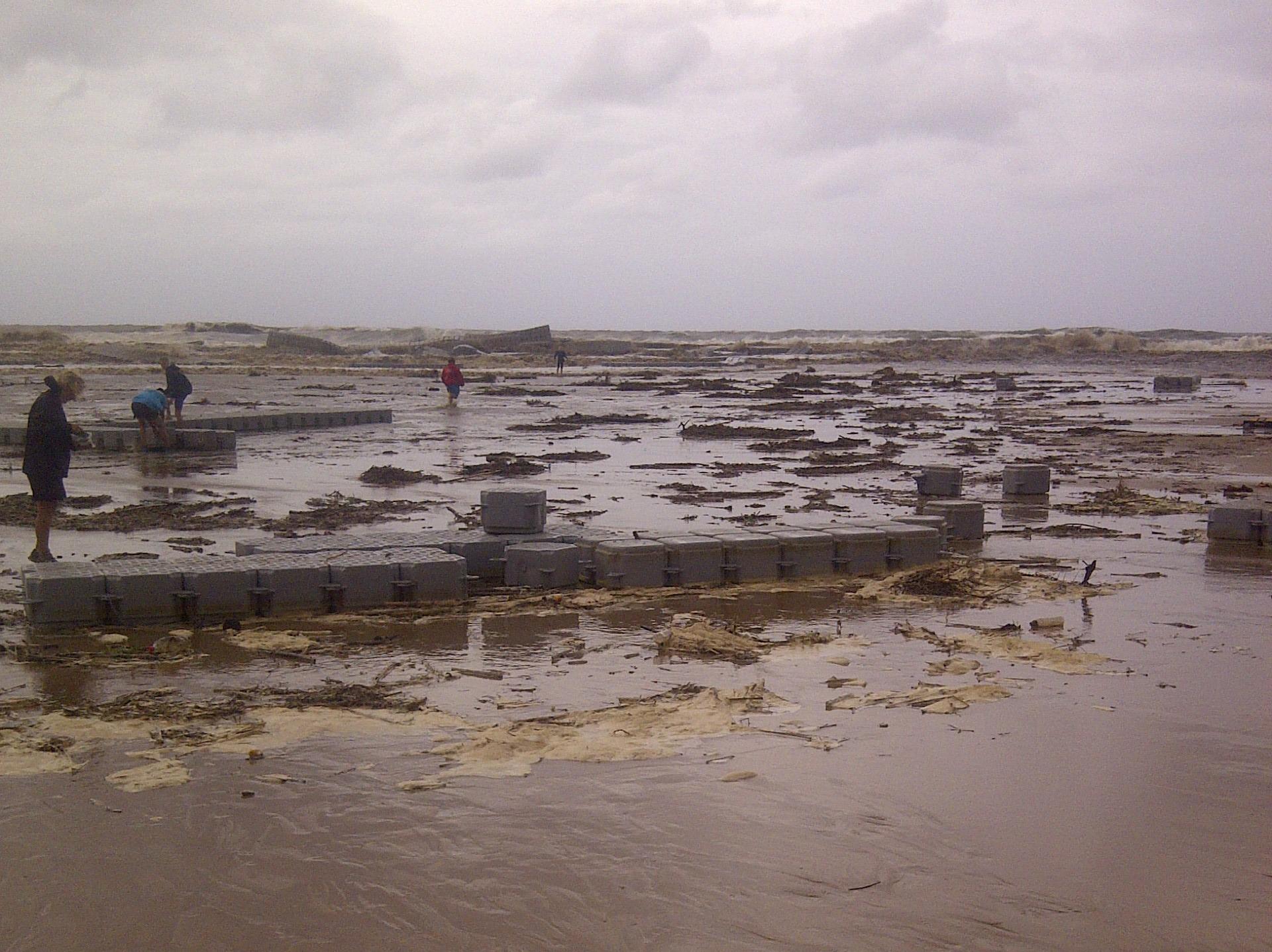 Following devastating rainfall in the Scottburgh area over the weekend the famous floating bridge that takes riders into the finsh on the final stage of the KAP sani2c was washed out into the ocean and required a large rescue team to salvage the pontoons ahead of the event starting on Tuesday, 12 May. Flavio Scarpa/
Gameplan Media

Himeville – The sani2c community desperately rallied together over the weekend as unseasonal downpours and resultant floods that ravaged much of KwaZulu-Natal’s coastline left the KAP sani2c’s iconic floating bridge at Scottburgh Main Beach in tatters and threatened the race’s use of the iconic stage three feature just days before the start of the event which gets underway at Glencairn Farm in the Southern Drakensberg on Tuesday, 10 May.

While disaster threatened, the people of Scottburgh came together to recover the segments from the ocean, paving the way for the urgent rebuild of the bridge ahead of the popular mountain bike event from the mountains down to the coast.

The first of the sani2c events, the Trail, gets underway on Tuesday and the conditions are set to be fair as riders set off on the first of three days from Glencairn to McKenzie Club just outside Ixopo. Riders will be greeted to some fresh conditions however the day will be dry and provide riders with some quality trails as the recent rains offer slight respite to the drought stricken province.

Rains ravaged the East Coast of South Africa over the weekend with estimates suggesting that around 120 millimetres of rain fell overnight on Saturday around the Scottburgh area, playing havoc with the floating bridge that has become such an icon of the KAP sani2c.

“There were trees and a whole lot of debris that washed up against the bridge across Scottburgh lagoon which popped it and took it out to sea!” Farmer Glen Haw mentioned. “The Scottburgh community all rallied around and they had fun on the beach yesterday pulling it all out and we just want to thank they guys down in Scottburgh!”

“There were some pieces of the bridge that were beyond backline and so between the surfers, the 4×4 club and the people of Scottburgh they managed to get it back onto the beach and above the high water mark.

“We now have it all back again so hopefully everyone will be able to ride along the bridge come Thursday when the first riders approach the finish!”

With the Trail event getting underway on Tuesday, the pressure of making sure that everything is ready for the first event when they arrive in Scottburgh on Thursday is immense however an optimistic and calm Haw believes that a problem of this nature brings the best out of the sani2c communities.

“The communities, right from Underberg all the way down to Scottburgh, all manage to pull together when something like this happens and it is great!

“It is part of what we are trying to do in the areas and to see that old school community spirit coming through is incredible.

“It is so good to see that spirit coming through when there is a disaster or something of this nature happens because then you really see people rally together.

“Despite it being a lot of work to get all the pieces of bridge out of the sea, I think the guys even managed to have a bit of fun with their 4x4s yesterday; it is certainly going to be something that they will remember forever,” Haw reflected fondly.

While the met office suggests that the rains have disappeared once more, there was at least light rain in most areas through the route passes, paving the way for riders to expect some immaculate trails for their journey.

“In Underberg we probably got around 15 millimetres of rain which, with the sunshine that is predicted for the rest of the week, will be ideal for the track!

“By the time the Adventure and the Race riders set off, the conditions are going to be close to perfect,” an excited Haw explained.