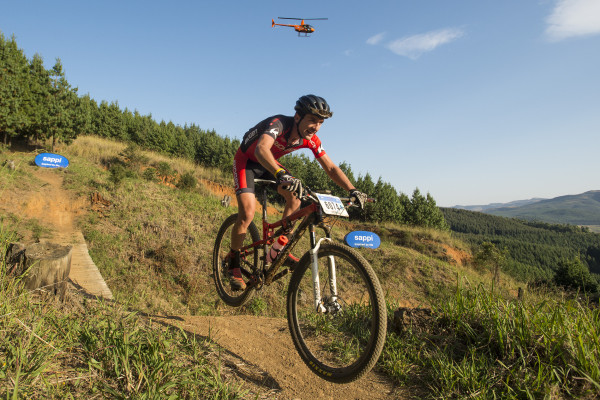 Howick – Former race winner Max Knox returned to the top step of the podium of the 60km Sappi Karkloof Marathon on Sunday as he blitzed the rest of the powerful elite men’s field while mom of two Jeannie Dreyer added to her Mother’s Day celebrations when she notched up her second win in the past three years.

Biogen-Volcan’s Knox showed his class once again as he sauntered home to a comfortable four and a half minute victory in 2:30.48 ahead of fellow experienced campaigners Darren Lill and TIB Insurance’s Andrew Hill, picking up the King of the Mountain hotspot prize along the way as well.

“Aside from Hilton I believe Karkloof is the oldest mountain biking event in the country and it really is a big one so I came here wanting to win and I’m very pleased to have done just that,” said Knox.

“Hats off to the organisers, they always put on such a fantastic show here at Karkloof and this year was yet another great event!” he added.

With the early morning cold and the knowledge of the testing climbs and technical single track Knox and co. started slowly however a first break by the eventual winner and Kargo Pro MTB first year Under-23 cross country ace Alan Hatherly looked to be a telling one midway through the encounter.

“After a steady start I picked up the pace a bit and Alan Hatherly was the only one to come with me.

“He was good through the single track but going up the Lebanon climb I set a pace I was comfortable with and from there I managed to get ahead a bit and eventually got the win, which was great!”

While Hatherly and Elite Athlete Development Programme member Julian Jessop both enjoyed strong starts, in the end experience prevailed as both youngsters had to surrender to the more senior rivals. 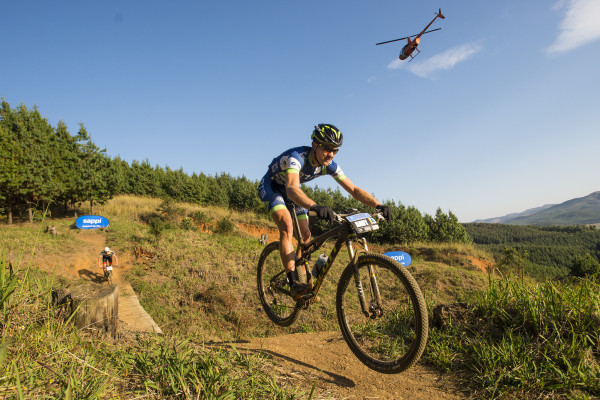 “I started quite slowly having been a bit sick this past week but going up Lebanon I noticed I was starting to close in on the guys in front of me,” explained Lill.

“I had a bit of a fall on the way down for some reason but kept it going and managed to catch Andy (Hill) and Julian (Jessop) and then shortly afterwards I went past Alan (Hatherly) as well.

“Max was gone by then though but I’m happy with second in the end.”

Quattro ROAG Series defending champion Hill rounded out the men’s podium and was pleased to have gone one better than 2014.

“I still had a bit of stage racing legs in me so when the youngsters went out hard and put in attack after attack I just look to try stick to my power outputs and in the end I think that consistency paid off for me.

“I’m really chuffed with my third but hats off to the youngsters, these up and coming ‘lighties’ are just getting faster and faster! Today was probably about 10km or so too long for them in the end.”

The women’s race fast became the Dreyer show as she surged to the front of the race and never looked back despite the best efforts of Time Freight eTeam youngster Frankie du Toit and Jowett Cycles’ Natalie Bergstrom.

“That is just such a lovely route; you don’t get a better 60km course anywhere in South Africa!” praised Dreyer afterwards. “Previously I’ve ridden here in the wet but today it was just perfect and it was such a fantastic day out!”

“The route has something for everyone; there are cross country and marathon riders. It is just brilliant!

“It was nice to get the win and it was just an incredible day all round. Mother’s Day, with my kids, I got to ride my bike – what more could I ask for?” she added surrounded by her son Callum (5), daughter Ruby (3) and husband Martin, founder of the RMB Change a Life MTB Academy.

In the end the 40km men’s and women’s titles went to Wayne Thompson and Sue Chapman respectively while youngsters Devon Baird and Sabine Thies were the first male and female riders across the line in the 20km family dash.

After a perfect Mother’s Day morning in the saddle or while friends, family and general spectators waited for their loved ones to return from their cycling adventures, festival title sponsors Sappi treated all women in attendance to free massages as part of the day’s appreciation.

More information can be found at www.karkloofmtb.co.za