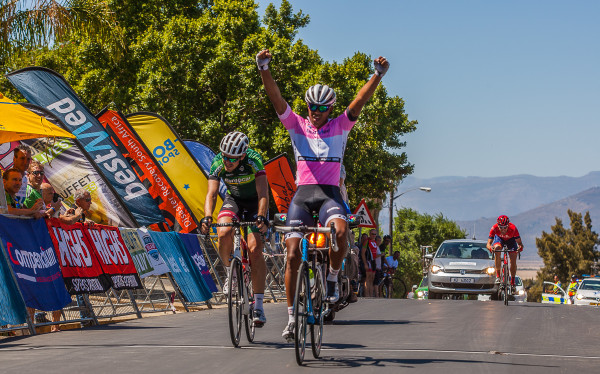 Dutch sprinter Peter Koning held on in a three-man breakaway to wrest the crown from overnight leader JC Nel on the 138km queen stage of the Bestmed Tour de Boland, presented by Pinarello, on Thursday.

Koning, who was third in the standings after Wednesday’s time-trial, finished third on a searingly hot stage from Tulbagh to Riebeek-Kasteel to don the yellow jersey for Australian outfit Drapac in 10:04:48.

Bonitas all-rounder Nel (10:05:43) slipped to second in the general classification, with Koning’s teammate Girdlestone (10:05:48) stepping down onto the bottom step of the podium.

Although the team from Down Under has already collected the wins on stage two and three, Koning said they had gone into the tour with the overall victory in mind.

“If we can win the stage in Paarl that will be great but the GC is now the main thing and we’ll see what happens next. 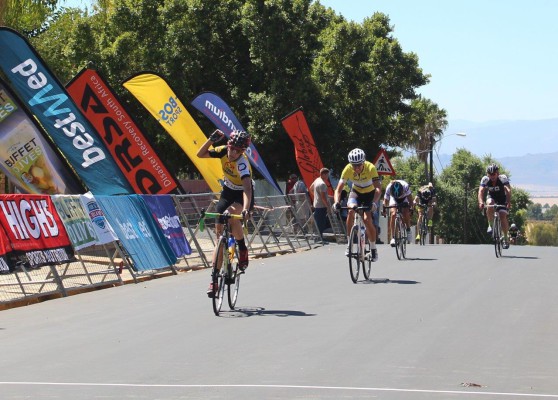 “I hope we can hold it together tomorrow and then see how things unfold on the last climb up to the Taal Monument.

Hoffman, who also leads the Compendium Insurance points classification, said his team had targeted the win on the undulating stage.

“There was actually a race within a race today. Peter was riding for the GC, while Brad and myself were racing for the stage win,” said Hoffman.

“We had reason to ride and worked well together. I had the stronger legs on the day and I’m happy to have pulled off the win.” 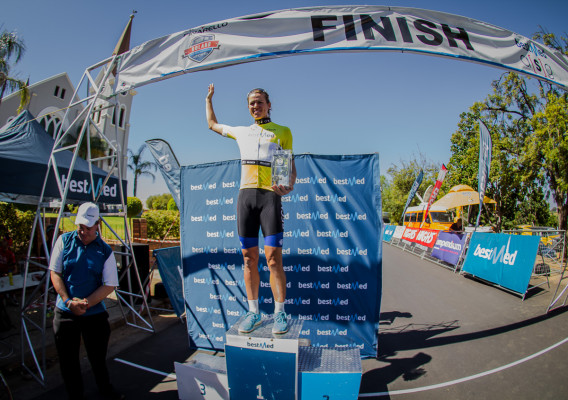 Heading out of Tulbagh, the bunch nullified a number of early attacks and the riders rolled together for the first 40km.

The first sprint prime at Porterville was won by Westvaal’s Tyler Day, who remains second overall in the points competition ahead of Potgieter.

In what looked to be the definitive move of the day, a five-man selection – comprising Konny Looser (Aramex), James Fourie (Europcar SA), Malcolm Rudolph (Drapac), Meron Teshome (MTN-Qhubeka) and Thulasizwe Mxenge (Rand Water Velokhaya) – broke away soon after the hotspot.

They put 45 seconds into the peloton and had extended their lead to over a minute as they turned towards Piketberg.

Looser grabbed the second sprint prime just outside the town and by the halfway mark the leaders were more than two minutes clear of the bunch.

The chasing peloton went on the hunt and brought them back some 20 kilometres later.

At the 95km mark, Potgieter, Koning and Hoffman exploded off the front and managed to open up a 30-second gap.

After puncturing near Morreesburg, Potgieter was forced to chase hard to catch his breakaway companions.

With the bunch chasing hard, the three then worked together over the remaining kilometres to hold their lead into the finish.

With no real test for the climbers on the stage, MTN-Qhubeka’s Tesfom Okubamariam retains the Aramex king of the mountains jersey, with Westvaal’s Paul van Zweel second and Evan Carstens of Giant third.

The women’s race came down to a four-rider sprint, with Lise Olivier of Time Freight E taking the stage in 4:10:04 ahead of RECM’s Ariane Kleinhans and Vera Adrian of Bestmed-ASG-Multihull.

Friday’s decisive 86km fifth stage starts in Riebeek-Kasteel and culminates with a mountaintop finish at the Taal Monument high above Paarl.