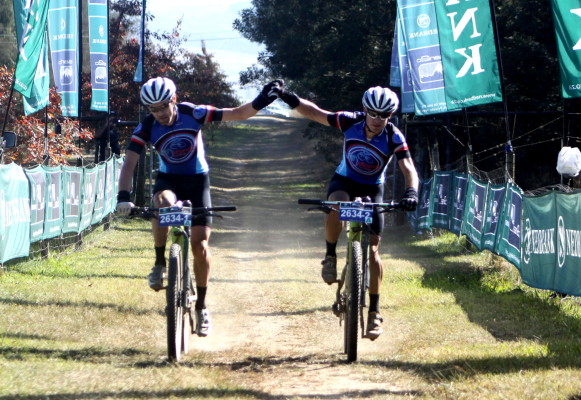 It was the familiar and determined Blend pair of Darren Lill (right) and Waylon Woolcock (left) who dominated the men’s field on Thursday’s opening stage of the Race during the 2015 Nedbank sani2c. – Anthony Grote/
Gameplan Media

Ixopo – Riding for their professional lives the Blend pair of Darren Lill and Waylon Woolcock blitzed the 79km first stage of the Race at the Nedbank sani2c from Glencairn outside Himeville to the Mackenzie Club to set up a handy two minute lead whilst it was the dominant RECM Women’s Team pair of Ariane Kleinhans and Cherise Stander who hold the cards in the women’s race after a exciting opening stanza.

The duo were fired up to use the opportunity to put themselves in the limelight as part of their strategy to secure a new sponsors after losing their backers at the beginning of the year.

“We wanted to come and prove a point, not having any sponsors, and we decided to take it from the gun, ride from the front and ride positively,” said Lill.

“On a fast stage like today two minutes is actually quite a big gap,” he added. “This stage is always quick and the single track was smooth and fast. You are kinda riding on the edge because it is so smooth and it is easy to make a mistake!”

The class duo of Johann Rabie and Swiss ace Konny Looser (Bestmed Wheeler) finished second with the RECM pairing of Erik Kleinhans and Nico Bell right on their wheels.

“In the single track before the floating bridge I lost my front wheel and crashed, went into a tree and damaged my front wheel a little bit,” said Kleinhans. “Two minutes is a proper gap for a race like sani2c, so we have really got our work cut out for us.”

He added that Looser had battled to get going. “He had a bit of bad legs because he only flew in from Europe two days ago. Hopefully he is feeling better tomorrow and we can try to make up some of that time in the Umkomaas.”

The days drama started with disaster for the duo who have dominated this race since its inception Max Knox and Kevin Evans, when Knox broke his chain – a recurring nightmare for the Biogen/Volcom rider – and they tumbled down the leaderboard as the repair cost them ten minutes and effectively ended their bid to secure Evans one final victory before retiring from pro racing.

They managed to put their frustrations aside and race through the pack to secure fifth on the stage, but the seven minute deficit despite their efforts has forced them to readjust their goals from another title to hopes of a podium finish.

In the space of two years I have broken more chains with Max than I have at any stage in my entire career,” said Evans tongue-in-cheek. “We kept it together and as we were catching our confidence kept growing.

“This race has always been lucky for me, so we will just hope for the best,” said Evans. “We spent a few pennies today but there is still a long way to go.” 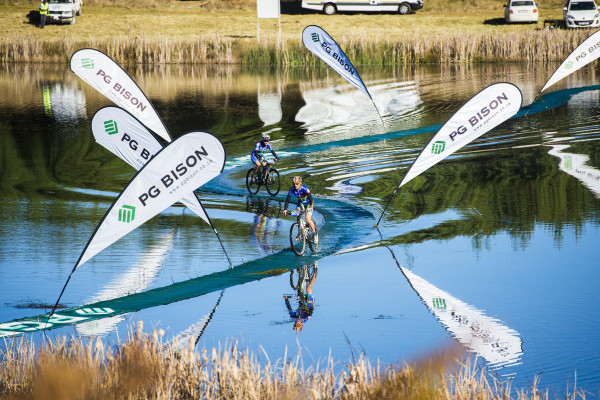 The famous PG Bison floating bridges were very much in play for riders on Thursday’s opening stage of the Race during the 2015 Nedbank sani2c. – Anthony Grote/
Gameplan Media

“I had a little bit of extra motivation after we broke the chain because it is going to be my last race here. But then, it’s only a broken chain. Life could be worse.”

Meanwhile the RECM women’s team of Ariane Kleinhans and Cherise Stander were in a class of their own on the first stage as they raced to 20th overall, and drove a handy four minute wedge between themselves and the Sasol racing pair of Yolande de Villiers and Catherine Williamson, with Jennie Stenerhag and Vera Adrian (Ascendis Health) a further two minutes adrift.

“Cherise rode like an absolute champ today,” gushed a delighted Ariane Kleinhans. “She really has the intensity for the road racing and she knows how to sit on a wheel. It was great teamwork today.”

Kleinhans said that their 20th overall was a particularly rewarding result.

“We give it our best and we do it professionally. We seem to be improving, and it is nice to see how you are doing in the overall classification,” said Kleinhans. “It is a good measurement of our form to see who we are able to ride with.”

Raced in ideal warm conditions on single track compacted by the Trail and Adventure riders and some rain earlier in the week, the fast racing took its toll with medical teams evacuating numerous riders with broke collarbones. Race doctor Grant Lindsay reported that only one injury so far this week was serious, with a rider evacuated to hospital with a serious spinal injury.

While the majority of the Adventure’s riders looked to soak up the spectacular views of the Umkomaas Valley as they made the renowned descent early on in their second stage, a few were locked in a titanic battle at the front of the field.

Advendurance’s overnight leaders Daniel Newman and Fritz Pienaar enjoyed another strong day in the saddle however a sensational display of climbing over the tough 98km second stage by Reuben Glenny and Kobus Venter saw the Dehorned pair clinch the stage’s line honours in 4:31.02.

Former Springbok flyhalf Joel Stransky and his fellow former rugby ace and South African Rugby Legends Association (SARLA) team mate Shaun Payne followed hotly on Glenny and Venter’s back wheels to cross the line in second, moving them up to third on the general classification just six and a half minutes and two and a half minutes behind Advendurance and Dehorned respectively.

On the back of his strong opening stage effort on Wednesday, former Proteas fast bowler Makhaya Ntini suffered at the hands of Thursday’s testing, climber-friendly second leg however not even complete exhaustion could stop the bubbly personality from an enthusiastic cheer and warm smile every time he passed a group of spectators or local community members along the way.

Friday will see the 1500-plus Adventure riders tackle the third and final stage of their 2015 Nedbank sani2c journey with the awaiting sight of the warm Indian Ocean at Scottburgh Main Beach set to be a welcome one for all.

Thursday also saw the conclusion of the Trail at the Scottburgh Main Beach on the South Coast after three days of festive and sometimes intense riding.

The race takes on a very relaxed attitude with winning not being held in high regard even though it was the FreeWheel Team of David Wright and Mark Misselhorn who were the quickest over all three days of racing and were recognised as the overall fastest team throughout the race.

It was a day of smiles amongst the Trail riders who completed the arduous journey to the coast from the Southern Drakenberg and there were some welcoming spectators on hand to help the weary.

Friday sees only two races out on the course between Underberg and Scottburgh. The Adventure heads into its last day from Jolivet Farm to Scottburgh Main Beach whilst the Race prepares for a gruelling second day from Mackenzie Club to Jolivet Farm. More information can be found at www.sani2c.co.za