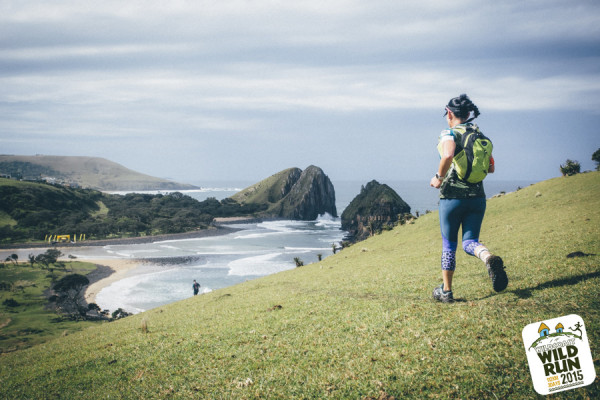 Nikki Scott on the final descent to the Wildcoast Wildrun® finish at Hole-in-the-Wall. Image by Ewald Sadie

Running from Kei Mouth to Hole-in-the-Wall, runners were treated to a wide variety of conditions. The first day of the event dawned calm and pleasant and gave everyone a gentle introduction to the Wild Coast. Day 2 brought with it high temperatures before a strong tailwind pushed runners along the coast toward the finish at the Haven Hotel. Conditions on the final day were dramatic at first but once the stormy skies, a bit of rain and a few lashings of lightning passed, it was perfect weather for running and a fantastic end to a beautiful three-day adventure.

East London local, Haydon Wood put in a sterling performance and took the overall title with a time of 11:56:56. He improved his second place on day 1 and crossed the line first on days 2 and 3 to claim first place overall. The ladies’ winner, Sarah Baisley from Johannesburg, made it a clean sweep as she took top spot on all three days, claiming the overall win in a time of 14:24:44.

36 hours after the three-day event started, eight runners took off on the first official Non-Stop Wildcoast Wildrun® in an attempt to cover the entire distance without any overnight stays along the way. Of the eight, seven runners completed the event successfully, crossing the line in 23h16 – weary, but happy.

The coming weekend will see the second departure, also known as the RACE, taking place. With several strong runners signed up, we’re looking forward to see how the race at the front of the field unfolds over the three days