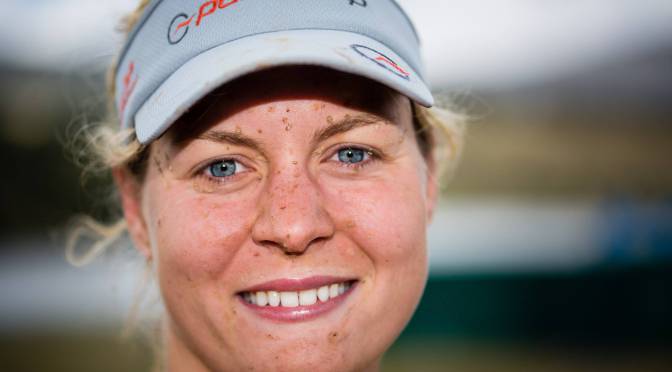 Last year I got chatting to an old friend Francois-Jacques Malan of Simonsig Winery. He kindly agreed to have me race for Simonsig at the 5th annual Woolworths Trust Charity triathlon. I won the race and so enjoyed it that there was no way I was going to miss it this year! Again, I had the privilege of racing for Simonsig.

The race is held at the Paul Cluver estate in Grabouw and if you’ve ever done Wines2Whales or ridden in the area you’ll know what fantastic MTB trails they have on the property.

Word got around that the recently crowned World Xterra Champion, Flora Duffy, would be racing. This meant that everyone else would be racing for second place.

The weather forecast for race day was looking pretty gloomy with lots of rain predicted the afternoon before the race and showers on the day. This was in holding with tradition as last year the race was scheduled to take place the weekend that the Cape flooded in November and Woolies had had to postpone their event.

The morning of the race was pretty dreary and I drove out to Grabouw in some heavy showers. The air was icy cold and it was reported on the radio that there was snow on the mountains somewhere. You could feel it.

I got absolutely drenched getting my bike down to transition, but luckily it stopped raining for long enough to allow us to set up in transition and warm up.

I was ready to race at 8:00. Unfortunately there was lots of traffic making its way along the narrow dirt road leading to the race and the start was delayed by about 30min. The water was 18.5 degrees and the air temperature was just 10 degrees. I did my warm up for an 8am start and then I started to get really cold. 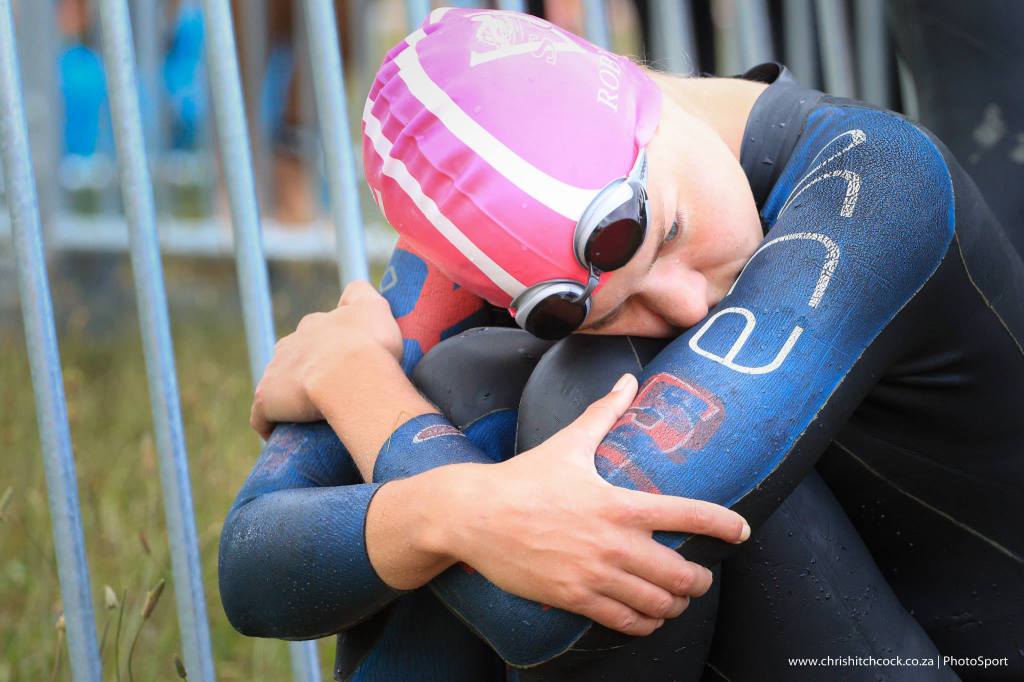 I always think there is almost no point in racing unless Chris Hitchcock is there to capture it.

I am never able to start as fast as the guys and they always sprint off, leaving me to fight my way forward again. The swim was short – only 800m. This didn’t allow me much opportunity to make time on the other girls, but I had a fast transition and left on the bike leg just behind Flora.

The bike route was super fun and muddy, with more singletrack than any other offroad tri I’ve done. I was feeling strong and seeing some good power numbers on my PowerTap Joule. Definitely impressed with how my coach had enabled me to get to the race feeling strong even in the middle of some very tiring training for DC. 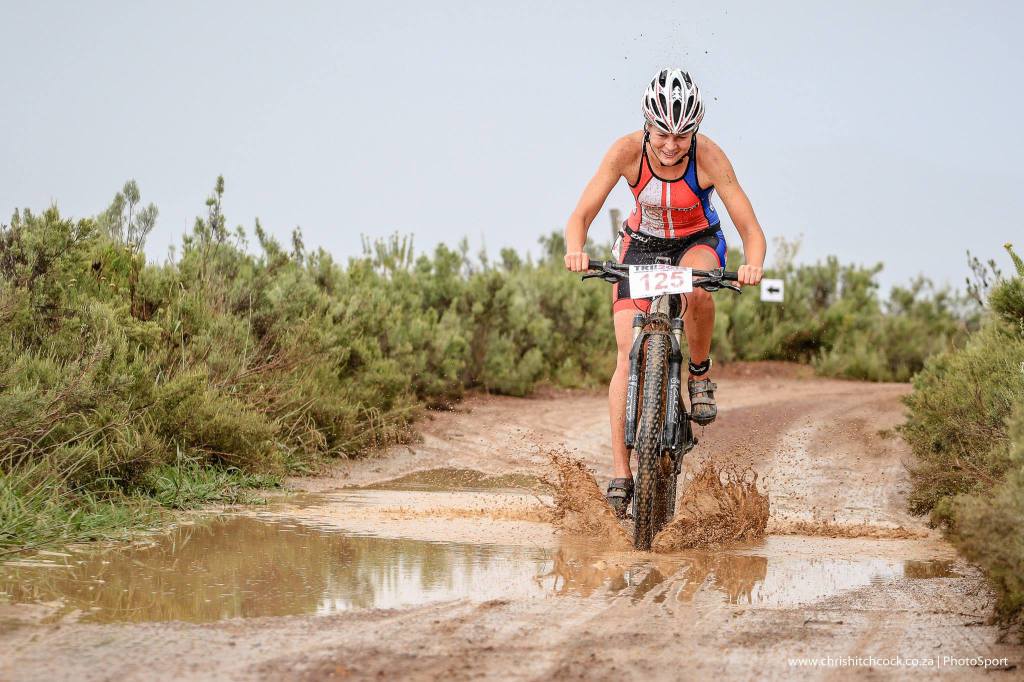 There was absolutely no point in not embracing the mud! I had so much fun!

I took a bit of a tumble down an incredibly muddy, slippery switchback. After that my whole right side was just brown with mud. There were some rain showers on the bike. Try cycling in a wet trisuit when it’s cold and raining. Chillos!

I almost forgot to take my gel, but managed to get it down just before taking my feet out of my shoes. I was stoked to get off the bike ahead of my biggest competition (after Flora) who I knew was super strong on the bike. If I had my running legs I thought I could hold on for 2nd.

The run was slish-sloshing through very slippery mud that was made worse by lots of bikes and runners having churned it up further. My legs felt good on the run, but I was still running scared. Katharine Wilson had also just returned from Xterra Worlds and was in good shape.

We ran some nice hills and then hit the most amazing, flowing singletrack. I was loving every second of the race and grinning like a Cheshire cat as I jumped puddles and navigated switchbacks. I don’t think I could ever say the same thing about a road triathlon. Having such fun definitely takes away from the pain of racing! 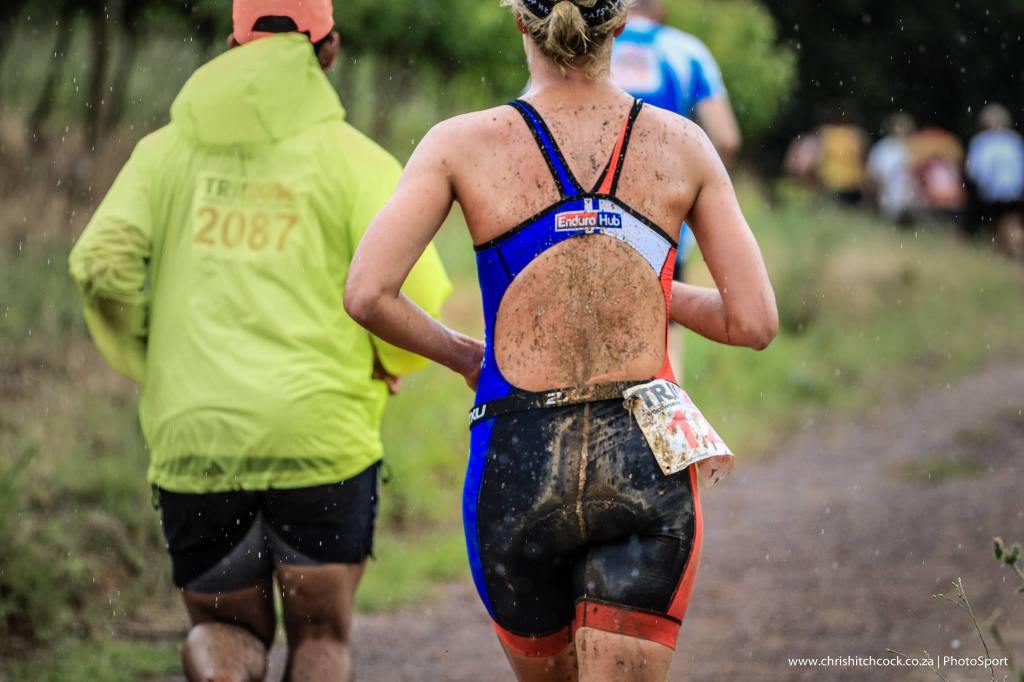 I hand washed my trisuit after the race. The amount of mud that came out was amazing!

I finished strongly and was super happy with how the race had gone and how I had performed. Unfortunately I then heard that Flora had gone wrong on the bike and the run and hadn’t finished officially. So I ended up winning the race, although under the circumstances I would have preferred to come second to a world champion.

I would go so far as to say that this is the best offroad tri of the season. One only not fun thing was having to clean my bike and dirty kit once I got home. I don’t think that my bike will ever be the same again…

Woolies also put together the best prizes. This year I won a very appropriate and extremely comprehensive Mediclinic first aid kit. Most of you will know what an #uberklutz I am. Between my G-Form knee pads and my new first aid kit I should now be able to sort out any damage I inflict on myself 🙂

The following day I did my final long ride in preparation for DC. My legs were a bit dented and it was a loooong 5hrs with lots of climbing, but was made easier by some good company and finished off with some great coffee at Ride In Cafe.

Now it will be a bit of a chilled week before heading to Swellendam on Friday with my Velocity Sports Lab Ladies team for 202km of fun on Saturday morning.

Huge thanks to Simonsig for having me race for them! And to Woolies for such a great event – best route and goodie bags ever! Over 2 million was raised for charity!

And a final thank you to my awesome sponsors: EnduroHub, Bicycle Power Trading, Virgin Active, 32Gi and G-Form. It is a privilege to represent such great brands.