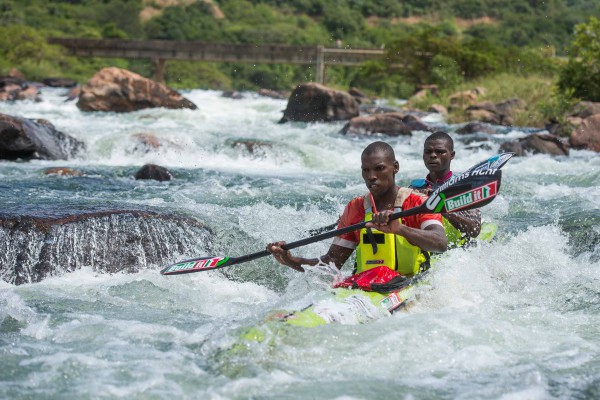 Thulani Mbanjwa (front) will renew his partnership with rising star Nhlanhla Cele for the Hansa Fish River Canoe Marathon next weekend, hoping to rediscover the form that took them to victory in this year’s Non-Stop Dusi Canoe Marathon. Anthony Grote/
Gameplan Media

Cradock – After his recent win in the Green Kalahari Canoe Marathon, popular Valley Of A Thousand Hills paddling star Thulani Mbanjwa has set his sights on a concerted challenge at the Hansa Fish River Canoe Marathon in Cradock on 9 and 10 October.

For Mbanjwa the K2 championship format of the Hansa Fish gives him a chance to rekindle a partnership with young Nhlanhla Cele that has already taken them to a major victory in the 2015 Non-Stop Dusi Canoe Marathon.

Mbanjwa (Build It/Williams Hunt) is passionate about the potential he sees in Cele and feels he has to harden the youngster in battle by showing him the tough marathon tactics against the best paddlers in the world.

Mbanjwa knows that is exactly what can be expected from the Hansa Fish River Canoe Marathon.

“Nhlanhla is a such a strong athlete,” said Mbanjwa. “I saw in the Non-Stop just how strong he can be, so I was excited to ask him to partner me this season.

“His running is unbelievable, and his paddling is pretty good too.”

Mbanjwa clearly has long term eyes on a Dusi K2 title challenge with former Triple Challenge winner Cele, with his remarkable running abilities with a boat on his shoulders.

But with the Hansa Fish offering little incentives for the runners and focussing instead almost entirely on paddling, Mbanjwa knows that they will have their work cut out for them over the two days and 82 kilometres of the race.

“The Fish is so tough and it looks like this year will be tougher than normal.

“Just getting a top ten in the Fish is a great result.

“I know that Nhlanhla has the power and the energy to push really hard. It is now up to me to take that talent and teach him to race tough when he is with the top guys,” he stressed.

“It is all about experience. You have to keep pushing your limits. Part of my job is to teach him to be competitive. I know he has that in him,” said Mbanjwa, who has two seventh place finishes to his credit at the Hansa Fish.

The former Dusi winner showed good form in an unusual appearance at the Berg River Canoe Marathon in the Western Cape in July, a race possibly least suited to his running and paddling strengths, and then carried that strong base into the Green Kalahari Canoe Marathon.

After holding off a strong field that included Czech Republic star Jakub Adam, Stu McLaren, Tom Schilperoort and Simon van Gysen, Mbanjwa took his chances in the closing stages of the race to canter to victory unopposed.

Mbanjwa feels that the tough winter base has huge advantages for the paddlers targeting the major summer races.

“I was not fit enough during the Berg, and it hurt, but it is such a good base of training,” he said. “I saw that in the Green Kalahari for sure,” he said.

Whenever he turns up to race the Build-It/William Hunt athlete is a popular personality, but he can expect little charity from the other top crews when  he takes to the water with Cele however he will take that as acknowledgement that the Non-Stop Dusi winning crew is viewed as a serious threat by the other Fish hopefuls.