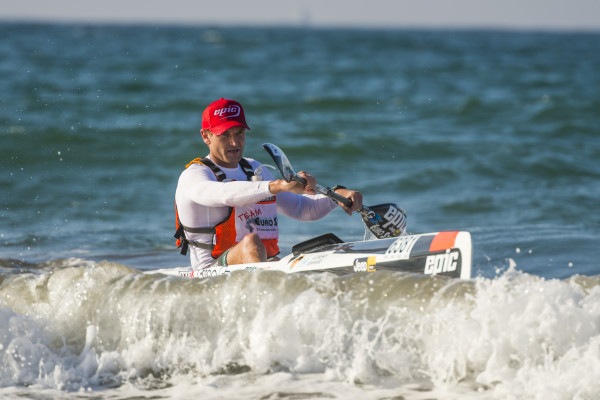 Durban – Following hot on the heels of his victory in the Maui Jim Molokai Challenge in Hawaii, Durbanite Hank McGregor underscored his form and ocean riding skills by winning the Investec Mauritius Ocean Classic in daunting, demanding downwind conditions.

The event, which forms the first leg of the International Canoe Federation’s new World Cup circuit attracted a very strong field, and was contested in strong 25 knot downwind conditions that allowed the confident surfski exponents to exploit the favourable runs over the majority of the 26 kilometre race course.

“Conditions were pretty wild out there, it was super cool! There were some wide-eyed paddlers, ” said an elated McGregor.

McGregor made his move in the tough closing two kilometers where the race enters the notorious Le Morne Pass and into a tough headwind slog to the finish.

“I managed to get a lead going into the point, and managed to keep it at about three hundred metres all the way to the finish.

“I am really happy to win a fourth Investec Mauritius Ocean Classic,” he added.

McGregor (Euro Steel/Epic Kayaks) retained his title to win for a fourth time at the Indian Ocean island paradise with Hill and Booth ensuring a carbon-copy of the podium at last year’s race.

Nikki Russell (Fenn Kayaks/Mocké Paddling) fell foul of the race rules in the closing stages, and despite reaching the finish line in second place, her line into the finish that saw her cut across the reef saw her withdrawn by the race officials.