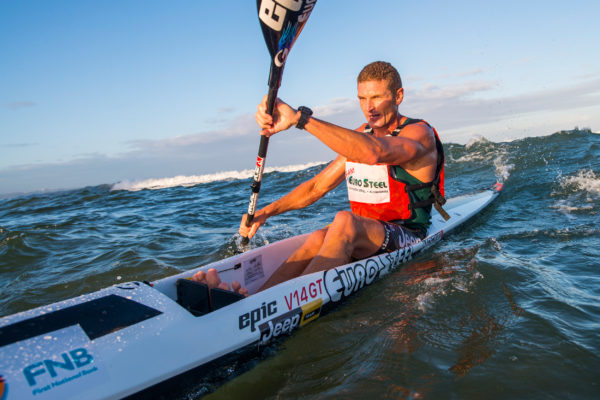 JOHANNESBURG, 04 NOVEMBER 2016 – Jeep Team’s eight-time World Canoe Marathon Champion, Hank McGregor, is set to end 2016 on a high note after being nominated for the Sportsman of the Year award at both the South African Sports Awards and the World Paddlers Awards.

It is this formidable form and performance that has earned him the prestigious nomination at both the national and international sporting awards.

The South African Sports Awards were established in 2005 to recognise and honour individuals and teams who have excelled both on and off the field. To be nominated for the Sportsman of the Year Award, athletes should have produced a world-class performance on the national, continental and global arena, continuously set world records, and displayed acceptable conduct in their respective sporting codes.

McGregor’s sportsmanship has been recognised locally and internationally, consistently nominated for top honours at the World Paddler Awards since its inception three years ago. McGregor was the first athlete to take home the coveted World Paddler Sportsman of the Year Award at the inaugural awards in Germany in 2014.

Says McGregor: “I am honoured to be nominated for the Sportsman of the Year at SA Sports Awards and the World Paddler Awards.  To be nominated amongst such a strong field of athletes really is the finishing touch to a great year for me. Thank you to everyone who continues to support me along my journey, and big congrats to all nominees”

The World Paddler Sportsman of the Year Award celebrates the most remarkable and outstanding male athlete or male team from the world of paddle-sports, as well as recognising the athlete’s achievements from the previous calendar year. This ceremony takes place in Portugal in February 2017.

This weekend, 6th and 7th November, McGregor competes in the Pete Marlin Surfski Race, a 2-day World Series Title race, taking place on South Africa’s aptly named ‘Wild Coast’, between the Orient Beach in East London and the beautiful Yellow Sands beach at the mouth of the Kwelera River. This race is a favourite for travelling paddlers and boasts some of the best downwind conditions in South Africa.

Next weekend, 12th and 13th November, McGregor will be in Hong Kong competing in his final international race of the year, the Hong Kong Dragon Run, a premier World Surfski Series event. This race is a tough 24km downwind paddling route traversing the spectacular Hong Kong Island.

The start is at Clearwater bay beach in Kowloon, and ends at Stanley Main beach on Hong Kong Island.