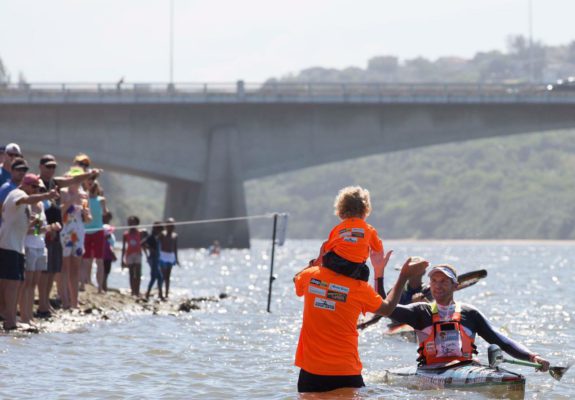 After missing the first race in the 10-leg series, McGregor took a firm grasp on the men’s title with his unbeaten run since he joined the weekly events.

McGregor, who has won every major river race and Surfski race in South Africa, and many titles across the world,claimed his ninth Surfski Series title just 48 hours before starting the 2017 FNB Dusi Canoe Marathon. After winning the final pre-Dusi seeding race, Campbell’s Farm to Dusi Bridge on 29 January, McGregor secured a front-row, No. 1 seed start for the 2017 Dusi.

McGregor suffered a setback on Day 1, snapping his paddle at Musson’s Weir less than an hour from the start. He finished Day 1 in third with a time of 02:51:09 behind Andy Birkett (1st) and Sbonelo Khwela (2nd).

Jeep Team athlete, Mikaela Jonsson, now a freshman at Florida Atlantic University, participated in the Conference USA Indoor Track & Field Championships on 18 and 19 February 2017. Jonsson, who ran the 800m, clocked a personal best (PB) of 2m14.79s in the heats, qualifying for the final. Jonsson improved on her PB, finishing the finals with a bronze medal in 2m14.48s.

The weekend of the 11 – 12 February 2017 saw almost 3500 OCR warriors descend on Legends MX, Pretoria, for the first race of the 2017 Toyota Warrior Series, powered by Reebok.

Warrior Race competitors are challenged by world-class obstacles that involve jumping off a 6m or 4m high platform into muddy water, crawling through mud under a wire fence, battling up slippery slopes and running or swimming across water, hanging off ladders and ropes across distances and more.

Joshua Masudi finished with a third-place podium finish in the Commando Elite race, and Jay JayDeysel claimed a fourth-place finish in the Black Ops Elite Category, the most difficult of all races, set against international OCR standards.

Jeep Team athlete and 2016 Jeep Warrior OCR Series title-holder, Thomas van Tonder, missed out on the first race of the series due to illness, missing his first race in three years. Jeep Team’s Carina Marx also missed the opening race due to injury.