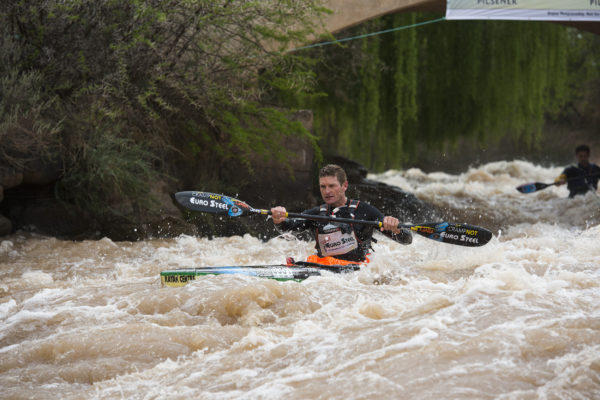 In a repeat of 2014, Euro Steel/Kayak Centre’s Hank McGregor has a slight advantage over Andy Birkett after the first day of the 2016 Hansa Fish River Canoe Marathon from Grassridge Dam to Knutsford Farm on Friday. Anthony Grote/
Gameplan Mediafeatured

Knutsford Farm – Nail-biting action at the sharp end of both the men’s and women’s race during Friday’s opening stage of the 2016 Hansa Fish River Canoe Marathon from Grassridge Dam to just below Knutsford Bridge saw defending champions Hank McGregor and Abby Solms claim the day’s spoils and bank invaluable advantages over their chasers in the race for this year’s South African K1 River Marathon Championships.

“Andy and I are number one and two in the world in marathon racing at the moment and probably very similar in river racing strength so not having time to catch up on him tomorrow is great while leading the race is the cherry on the top,” said McGregor.

“There was some great sportsmanship out there today and some really top class racers made it a top day on the river and I’m looking forward to another tough day tomorrow,” he added.

Despite Euro Steel/Kayak Centre’s McGregor getting his nose in front, Euro Steel’s Birkett was pleased with his first stage effort.

“I had a lot of fun out there today, there was a lot of banter going around and Hank and I were even chatting right up until the finish and I just enjoyed being back on the river,” said Birkett.

McGregor and Birkett found themselves locked in a three-way tussle with hometown hero and Birkett’s 2015 K2 winning team mate, Greg Louw for much of the day.

Louw ultimately paid the price for the day’s fast pace though as he fell off the KZN based lead duo’s tails in the final few kilometres to cross the line third.

“I can’t complain at all,” said an animated Louw. “There’s nothing wrong with finishing behind the world’s first and second best marathon paddlers!”

A swim at Double Trouble Weir just 3.5km into the clash put Western Cape’s Jasper Mocké on the back foot from the get-go however the Euro Steel/Mocké Paddling athlete dug deep to claw his way back into the top 10 by the end of the day while a strong showing by Seed Co.’s Under-23 ace, Andrew Houston saw him finish fifth.

Czech Republic’s Jakub Adam was the first of the strong international contingent home, finishing the day in sixth place, with junior flyer Jean van der Westhuyzen – who also had to recover from a swim at Double Trouble – was the first Under-18 competitor across the line and finished in seventh place overall.

While many shone on day one, the 2016 Hansa Fish ended disappointingly abruptly for others as top 20 hopefuls Banetse Nkhoesa and Alan Houston were forced to withdraw due to hyperthermia and a stomach ailment respectively after just half of the first day’s racing.

The women’s race was just as fascinating as the men’s, despite Solms going on to finish the day the nine minutes ahead of her nearest rivals.

Euro Steel’s Solms – who spent much of the winter focusing on road running – made her move early on before, due to the pressure of the star-studded women’s field, the 27 year-old opted to shoot the notorious Keith’s Flyover Rapid for the first time in her career.

Despite the obstacle’s renowned high risk, Solms sailed through cleanly and it proved to be a decisive move that kept her chasers at bay for the rest of the day.

“I really didn’t expect to end the stage this far ahead because I honestly haven’t put in the time in training,” explained Solms. “I do back myself in terms of experience though, so that might be one advantage I have over the other girls.”

“I felt so comfortable in the boat that yesterday I decided I was going to give Keith’s a go. I felt that I was going to need any advantage I could get, so I was really happy to get through that cleanly.

“Tomorrow is a new day with a lot of obstacles as well as a lot of flat water that will help the other girls who have been racing overseas, so it is going to be a tough day and you couldn’t ask for a better finish,” she added.

Triple Olympian, Bridgitte Hartley (Knysna Racing) made hard work for herself as the three swims during the opening day meant she had to work hard to stay in contention.

A determined effort saw Hartley cross the line in second place with the ever-present Jenna Ward (Euro Steel) finishing a minute and a half adrift in third place to be the first Under-23 Women’s boat to the finish.

“I had to fight really hard after my three swims today but I am happy with where I am and with some longer flat sections tomorrow I will be able to put the hammer down and want to have a good, clean run into the finish,” said Hartley.

A welcome return to the canoeing world by former South African women’s paddling force, Robyn Owen (Best 4 Sports) after a two and a half year absence from the sport saw the diminutive talent finish the stage in fourth place.

While hoping to be as competitive as possible throughout this year’s Hansa Fish, Owen primarily aims to use the event to erase a few coats of paddling rust ahead of the next month’s Adventure Racing World Champs and her Team Painted Wolf’s Coast to Coast multisport assignment in New Zealand in February.

Saturday’s second and final stage takes place between just below Knutsford Bridge to Cradock Sports complex with the batches starting at 06h30 and the elite racers getting their second day effort underway at 10h30.