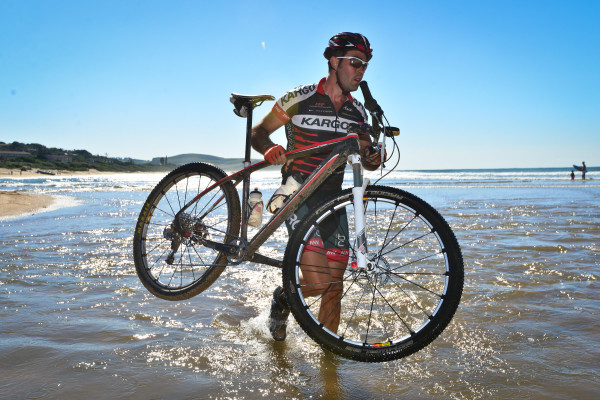 The popular Sappi Scottburgh MTB Race is all set to welcome the addition of the Chep SA walkway to the closing stages of the 2015 clash. Darren Goddard/ Gameplan Media

Scottburgh – A fresh finish experience awaits participants of the 2015 Sappi Scottburgh MTB Race on Sunday 9 August as they tackle the all new Chep SA walkway on Scottburgh’s Main Beach shortly before heading for the finish line.

While more of the same great courses that the South Coast event has become renowned has again been promised, the purpose-built finish stretch as well as other new additions and minor tweaks the weekend’s heavy rainfall has forced are guaranteed to keep things fresh in 2015.

“We’re thrilled to confirm that before riders get on to the beach, they will ride across a 70 meter long and one meter wide D&J scaffolding platform and riding across the beach on the Chep SA walkway!” says race director Flavio Scarpa.

After heading out together through the neutral zone from Scottburgh Main Beach to the start line at Renishaw sugarcane farm, riders will be met almost immediately with one of this year’s new elements.

“Right at the very first climb we’ve given everyone an option this year; either they can head up the district road as they usually do or they can tackle the section of single track that we’ve opened up there.”

A change in the positioning of the Thule King of the Mountains hotspot prize is another fresh element that may well provide some added interest later in the race.

“The King of the Mountain is a bit later in the race this year and will be at the crest of the climb up Clint’s New Switchback around the 20 kilometre mark,” explains Scarpa.

“This is quite a steep gradient at first before easing off onto some old single track before then the final 150 meters is up an open district road which will give riders space for a good sprint if two or more are still together at that point.

“Once riders reach the 30km mark then there is a bit of work still to be done,” cautions Scarpa. “If you go too hard too early then you’ll be in a bit of trouble on the way home.”

The same course that was used in 2014 will again be in action for the 28km Dash & Splash race while a fun yet manageable 10km route has also been planned.

“The 28km isn’t too technical but does have 600 meters of climbing – enough to get the blood flowing while the 10km route will be heaps of fun!”