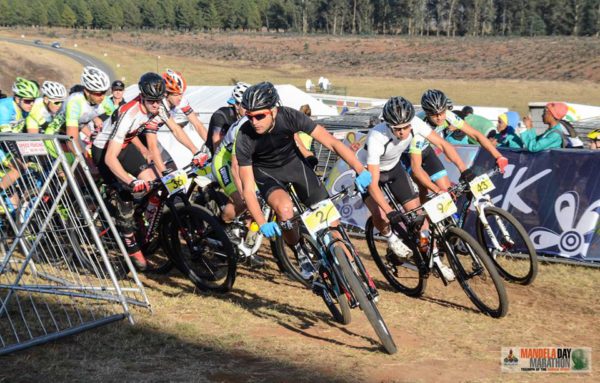 And they’re off. The elite men’s batch sets off on the 2016 Mandela Day Marathon MTB Dash. KZN MTB

Pietermaritzburg – Mountain bikers have a chance to ride in memory of South Africa’s greatest icon at the Mandela Day Marathon MTB Dash which starts and finishes on Saturday 26th August at the Mandela Capture Site near Howick.

The 42km, 21km and 10km mountain bike races are part of the weekend of events that also include a road running marathon, trail runs, a fun run and a triathlon, all in honour of former President Nelson Mandela.

With a healthy prize fund of R122 000 the event offers what is believed to be the biggest prize money for a one-day classic MTB distance event and as such normally attracts a strong field of riders. Last year Alan Hatherly returned from competing at the Rio Olympics and in his first race back claimed the 2016 title.

All the Mandela Day MTB Dash events start and finish at the world famous capture site in Lions River. The routes offer riders a chance to tackle some of the best trails in KwaZulu-Natal on a course created by Nick Floros, the Pietermaritzburg-based international course designer who was praised for his Rio Olympic mountain bike course.

Riders in the 42km and 21km events will cross under the N3 and be able to enjoy the famous Howick trails which have been consistently rated among some of the best mountain bike riding in the country. Floros also takes the riders on single-tracks which are purpose cut for the event in the adjacent Lions River and Midmar forest areas.

While the “Course is King” mantra is sure to attract riders to the event, the chance to ride in honour of Madiba, the Father of the Nation, makes this event a must-do event for mountain bikers who want to pay homage to the deeply respected Nobel Peace Prize winner who was so instrumental in taking South Africa into a peaceful democracy.

“The event has been running since 2015 and we feel it is well on its way to becoming one of the major one-day events on the KZN and South African mountain biking calendar.

“The so-called Hilton-Howick-Karkloof ‘golden triangle of mountain biking’ is one of the best areas for riding in the country and we feel this event is able to best make use of the fantastic venue while also honouring the man who made it possible for all to enjoy the beauty of the country.”

More information on the various Mandela Day Marathon events can be found at www.mandeladaymarathon.org.za while entries and the MTB Dash information is at www.roag.co.za