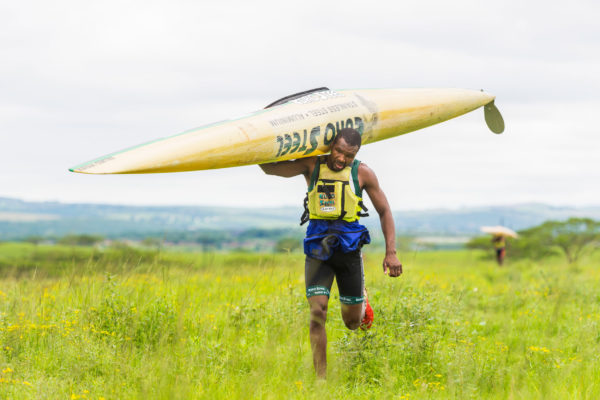 A fourth win in a row for Martin Dreyer’s Computershare Change a Life Academy ambassador and Euro Steel/Red Bull star Sbonelo Khwela at the recent Umpetha Challenge highlights the work that is being done with the academy and their paddlers. Anthony Grote/
Gameplan Media

Durban – The recent Umpetha Challenge canoe race showcased the rich talent that the various development programmes around the country have produced with Martin Dreyer’s Computershare Change a Life Academy ambassador Sbonelo Khwela taking the race honours while Lucas Mthalane finished third as he continues to guide the setup’s younger generation.

Mthalane, who has been involved in the Change a Life Academy since its inception, has climbed the academy’s ranks since 2009 and is now a loyal servant to the programme in his capacity as head coach.

Despite the responsibility of making sure the next generation of CAL paddlers develop into top class athletes, he remains a role model and a fierce competitor on the water as well.

“I have come third so many times at the Umpetha Challenge but I am still happy with the result,” Mthalane said. “I really would have liked to break into the top two but I had so much work to do on the run to catch Banji (Thulani Mbanjwa) and it was just too far.”

“I knew that I was going to have to be strong on the run because of the size of the bunch that I was with at the take-out, but I was really happy with how I ran the portage.

“Getting a top three is always a good feeling!”

Mthalane and the rest of the impressive Change a Life Academy are now gearing up for the next 2017 FNB Dusi Canoe Marathon qualifier – the Ozzie Gladwin Canoe Marathon presented by Parklane Superspar at the end of the month – with an eye on another strong performance.

“There is going to be a tougher field at the Ozzie Gladwin than there was at the Umpetha but that doesn’t mean that my attitude changes, I am definitely going to be up for the challenge!

“I have got my eye on a top five at Ozzie Gladwin but I am going to have to work really hard considering the field that will be there as well as the flat water section at the start of the race,” he added cautiously.

Mthalane has been in a mentorship and coaching role at the academy for seven years and has coached some of the province’s best up and coming paddlers in his time, including the likes of Banetse Nkhoesa who partnered Khwela to third place at the 2016 Dusi.

“It is great for us to see the younger guys doing well at races and doing well often.

“Racing against and training with the younger guys that are coming through makes me realise how far we have come as an academy from when we started all those years ago.

“We never really had the idea of becoming so competitive in mind when we started the academy and we weren’t too serious but when we started producing results and performing well, we grew in confidence!

“It’s great to see about 20 people at our training sessions every day and we want to keep producing guys like Sbonelo (Khwela) and Banetse (Nkhoesa),” he added.

The Computershare Change a Life Academy has always dominated the top 20 of most Dusis and build-up races for a number of years yet they have battled to win or produce consistent top five results, something Mthalane understands.

“We train together and all work at the same pace but when we get to the big races we are just a bit too slow.

“I want us to compete at more dice races in Durban and Pietermaritzburg so that we can get up to the speed of the winners.

“Getting up to speed with the guys who are winning the races will be a good step forward for the team and will hopefully see us push for race victories in the future,” a positive Mthalane commented.