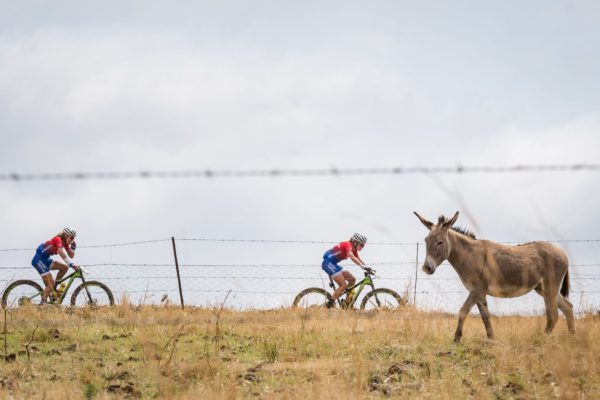 The day’s riding distance remained at 99km, but due to heavy rain in the region leading up to the first day of racing, the first 32km of day one was ridden as a neutral zone, with the race proper starting at the first water point.

The race started in cold and misty conditions at Windmill Farm on the banks of the Sterkfontein Dam. As the clouds lifted, a field featuring some of South Africa’s top MTB talent turned up the heat, hurtling towards the finish and race village at Em’seni Camp on the banks of the Tugela River.

In the men’s race, the shorter racing distance allowed a large bunch to stick together, with the top riders only splitting around the 75km mark. Up until that point, Buys and Beukes, along with Hill and Sidey, had been in control of the pace at the front, but just after the third water point Bell was able to accelerate, taking Combrinck with, and pull away from the field. Hill and Sidey chased, staying with the leaders until a sprint in the final 200m saw Bell and Combrinck over the line first.

“That felt longer than 99km for some reason, but it was a good, fun ride,” said Bell. “The route was actually in great condition and the riding was really enjoyable. The rain meant there was no dust, and I thought everything was rideable.”

As the race entered the business end, there was a four man pile-up that could have derailed three teams. Phil Buys’s handlebar caught Combrinck, the resulting instability taking down Bell, Sidey and Buys. No bikes or riders were harmed, though, and the three teams were able to race on.

“The racing was a bit flat in the start,” said Combrinck, “but after the second water point Nico started riding hard and that upped the tempo. Apart from the crash there were no issues; the riding was really good overall. It was a little bit slippery in the beginning, but the trails were fantastic and you could see a lot of effort had been put in.”

In a reversal of fortunes from a race a week ago, McDougall and Sanders were able to get home ahead of Lill and Adrian thanks to a minor mechanical suffered by the later around the 65km mark. “Candice and Vera had a puncture and we were able to get away,” said Sanders. “We rode hard and really enjoyed it, the trails were fantastic.”

The leading ladies stuck with the second bunch of men for much of the race, before pulling away towards the end of the route. “What an amazing day of riding,” said McDougall. “Tough but fun. The rain made the trails nice and tacky, so you could really go all out. It was great conditions to ride in.”

The day one route featured some of the region’s iconic mountain bike trails; Great Wall my China and Baboon Route took riders along the top of the escarpment, with sweeping views of KwaZulu-Natal below, while the twisting and turning Solly’s Folly – switchbacks for days – was the perfect way to ride off the escarpment and into the valley. Everest, the final roller-coaster descent of the day, was followed by the leafy Garden of Eden trail, the final 5km stretch of the day’s riding flows alongside the Tugela River.

Day two the Grindrod Bank Berg & Bush is a shorter day – just 60km – but starts off with the lung-busting Ox Wagon Hill before heading into the excellent bushveld trail and single track. With some short, sharp climbs and technical descents, riders’ fitness and skill levels will be tested.

After the day’s racing, the riders will then relocate to the top of Spionkop for the Volvo Spionkop, a 1.3km dash for cash from the bottom of the famous hill to the top. The winning male and female rider will each be rewarded with R20 000 for their efforts.