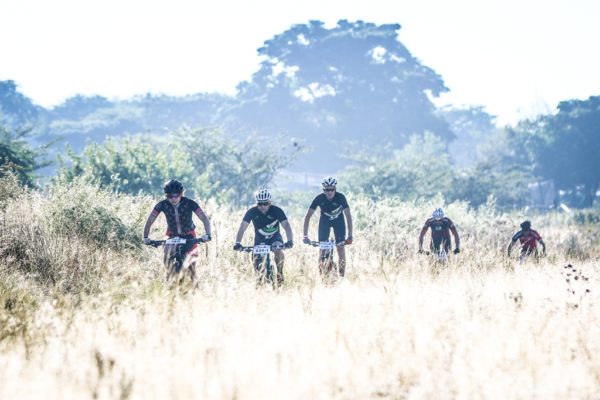 Amy McDougall (at the front of the group) claimed three successive stage victories to win the overall solo women’s title. Photo by Oakpics.com.

The 2018 Glacier Cradle Traverse came to a close at Avianto Estate – in Muldersdrift, on Sunday the 8th of April – as Bryce Munro, Andrew Stockwell and Amy McDougall completed perfect clean sweeps of all three stages. Similarly Yolandi du Toit and Ben-Melt Swanepoel dominated the mixed category, while the mother/daughter combination of Yolande and Michelle de Villiers reigned supreme throughout in the women’s team category.

Upon completing their third stage win of the race, repeating the feat the Continental Tyres team achieved with Stockwell and Danny Fowler in 2017, Stockwell and Munro were crowned 2018 Glacier Cradle Traverse champions in the men’s team category.

“It was a last minute decision to race” Munro reflected upon crossing the finish line. Munro stood in for Fowler, who had been laid low by bronchitis which he developed at the Absa Cape Epic. “As much as I’m a local, there are a lot of trails I’ve never ridden and they were immaculate; so I’d like to say a big well done to Richard Beswick. He put so much work into the trails and everyone was really impressed. All-in-all it was a fantastic weekend and thank-you to everyone involved” Munro summarised.

The solo women’s champion, McDougall, won each of the three stages and finished 3 minutes and 27 seconds behind the men’s stage winners on the final stage. In total McDougall was just 7 minutes and 21 seconds behind the men’s team champions, Munro and Stockwell, on her way to claiming the title. “I definitely went flat-out every day” McDougall confessed. “I rode my hardest and tried to race the boys, so it wasn’t easy. But I loved the short distances, it just cut out all the boring long roads and made for a weekend full of fun” she concluded.

The solo men’s race came down to the wire, with stage winner Grant Usher having relaxed on the opening day; the general classification battle was between Steven Bark and Sean O’Flynn-Madden. O’Flynn-Madden crossed the finish line in second on the stage, 1 minute and 39 seconds ahead of Bark to turn the 1 minute 22 second overnight deficit to a 17 second advantage.

The mixed and women’s team categories were less fiercely contested but the riders taking part in them arguably had more fun. Du Toit and Swanepoel were the first riders across the line to have stopped at every water point throughout the three stages. The Garmin pairing certainly maximised their enjoyment. “We’ll definitely be back again next year” Swanepoel enthused while laughing at the fact that he managed to combine a beer at the final water point of every stage with a general classification victory.

The women’s team champions, the De Villiers women, were not the only parent and child combination in the race, but they were the most successful. “I’m very proud of Michelle” Yolande de Villiers said as the Silverback team wrapped up their victory. “She dug very deep today, she was in a bit of a hole but we got through it and it’s proved to her how strong she really is” the visibly delighted mother said. “I’m selling my bike tomorrow” her daughter joked, before adding: “no I really enjoyed that. It was great to ride with my mom.”

While the more competitive riders were racing for stage honours Steve and Keith Buhr had managed to convince Trevor D’Oliveira, Dieter Rothman, Kevin Lawrence and Deon van Zyl to ride in fancy dress for the Smile Foundation. The six set out in various outfits, some (D’Oliveira and the Buhr brothers in particular) more revealing and shocking than others. They did however manage to exceed Steve Buhr’s initial R25 000 fund raising goal, so their embarrassment and in some cases sunburn (in areas which seldom see daylight) was for a good cause.

The real winners at the Glacier Cradle Traverse were the riders who simply took part for the love of mountain biking. With a relaxed atmosphere and even a Schools Race and Fun Ride on the final day it truly was a memorable family experience.

For the full results from the Glacier Cradle Traverse click here.