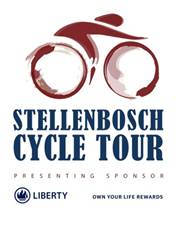 (Cape Town, 11 November 2014) The Western Cape’s second-largest road cycling event, previously known as Die Burger Cycle Tour, has officially been renamed the Stellenbosch Cycle Tour, to honour its iconic location and rich history.  The 2014 event is presented by Liberty – Own your life Rewards,

David Bellairs, a director of the Cape Town Cycle Tour Trust which organises the annual event, explains the rationale behind the name change: “Stellenbosch is undoubtedly one of the oldest, most scenically attractive and historic towns in South Africa.  We wanted to uphold the event’s heritage, while highlighting its beautiful route through the iconic winelands and mountains of Stellenbosch. The new Stellenbosch Cycle Tour name and logo perfectly aligns with this vision.”

Liberty – Own your life Rewards, the value added services and rewards business for the Liberty Group, has come on board as a sponsor of the newly named event this year.  Commenting on their involvement in the Stellenbosch Cycle Tour, Managing Director of the Own your life Rewards division, Rebecca Eliot says, “We are excited to be a part of the 2014 Stellenbosch Cycle Tour. This involvement, we hope, will provide a springboard to many rewarding events for current and prospective customers.”

Bellairs endorses Eliot’s view on the new partnership, adding: “The event has been looking for a corporate sponsor for a number of years, and while previous sponsors offered us great support, we were faced with ever increasing financial operational burdens, also resulting in the 44km route unfortunately not being viable this year.  We are very excited to have Liberty – Own your life Rewards on board and believe their vision and rewards programme is a perfect fit for individuals who enjoy a healthy outdoor lifestyle.”

The Stellenbosch Cycle Tour, now in its eighth year, takes place on Sunday, 30 November 2014.  In addition to the new name, a significant change to the route sees the inclusion of the New Helshoogte Pass to replace the currently unsuitable Old Helshoogte Pass – taking the route from 97km to 95km.

Entries for the 2014 race are now open, with just under 1 000 still available.  Cyclists can visitwww.stellenboschcycletour.co.za and follow the easy instructions to enter online.  Entries cost R330 for PPA members, or R350 for non-PPA members, and are limited to 7 500.

For more information about the Liberty – Own your life Rewards programme, visitwww.ownyourliferewards.co.za.