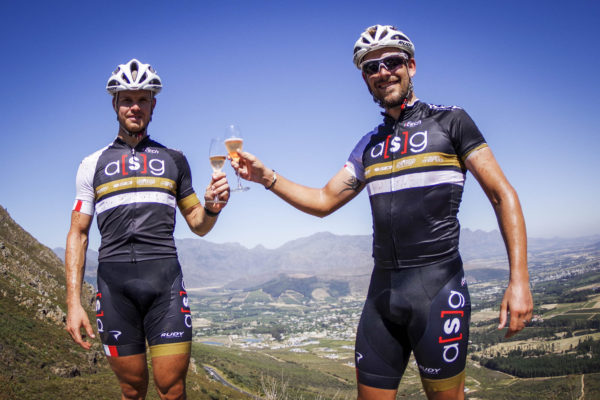 The Ellsworth-ASG outfit of Travis Walker (left) and Pieter Seyffert toast a new partnership after winning the men’s team title in the TransCape mountain bike race following the final 78.5km stage from Villiersdorp to Franschhoek. The seven-day, 690km journey, which started in Knysna, ended at the La Couronne Wine Estate in Franschhoek. Photo: Jacques Marais

The Ellsworth-ASG outfit of Pieter Seyffert and Travis Walker finished off the TransCape mountain bike race in style by claiming victory on the final stage to cement their overall triumph today.

It was the perfect start for the new pro outfit, who rode together for the first time when they lined up in Knysna last Sunday for the seven-day, 690km race to Franschhoek in the Western Cape.

They were followed in the general classification by the Belgian team of Eddy Feliers and Kristof de Neys (Cicero Baik), with David and William Wertheim Aymes (Bromance) completing the podium.

Today’s route over 78.5km from Villiersdorp to Franschhoek included the famous Groenlandberg climb, arguably one of the toughest ascents on the race, which Walker described as “a real test”.

“It’s a hard climb due to the terrain, with lots of sand and rocks,” said the 25-year-old from Hilton in KwaZulu-Natal. “But once you get to the top the views are amazing so it is worth the effort.”

Walker said he wasn’t too sure what to expect coming into the TransCape but described it as a wonderful experience.

“We used this race as an experiment for Pieter and me, so we could get to know each other, as well as to prepare for races such as next month’s Bestmed Tour of Good Hope.

“I think as the year goes on Pieter and I will get stronger and work even better together.”

He said the moment that stood out for him was the fifth stage on Thursday when the pair, who had built up a comfortable lead, rode with the peloton for the day.

“As a professional, for me to ride with these guys and to see their determination and passion for cycling was an eye-opener. It showed just what spirit and camaraderie there is on the TransCape.”

The 30-year-old Seyffert from Helderkruin on the West Rand said there had been some challenging times up the Groenlandberg and Franschhoek Pass climbs.

“It was a tough day because the climbs were loose and rocky and you are not completely done after conquering Groenlandberg,” he said.

“But Franschhoek is one of my favourite climbs, being gradual and steady, and then there is the awesome finish at La Couronne Wine Estate where we were treated to champagne.”

Seyffert said he was excited about the partnership with Walker.

“He’s unbelievably talented and a very nice guy. I’m very happy with the partnership and as I only started training in January, I believe once I’m in good shape we will really do well together.”

He said the moments that stood out for him were the evening functions, which exemplified the spirit of the tour.

“These are the heart of the race where everyone shares their war stories while enjoying a bottle of wine in a relaxed environment.

“That really sticks in my mind – having the chance to mingle with everyone and to talk with them about the highs and lows.”

The Spar team of Catherine Williamson, from north Yorkshire in Britain, and Cape Town’s Hannele Steyn rode to first place on the podium after opting the compete in the mixed category.

The 34-year-old Williamson said the race had been tougher than expected but it was “brilliant training for the rest of the year”.

“It’s always nice to do a race at the beginning of the year when there’s not too much pressure and the legs are in winter mode. This is a perfect season-opener for me.”

The 51-year-old Steyn, from Durbanville, paid tribute to the race organisers from ASG Events, whom she described as “being from a different world”.

“You know, each race has something which makes it special and in this race the organisation is incredible. They are always there to help you and nothing is too much for them to do.

“The Volvo involvement was incredible and the drivers treated us like queens getting us from place to place.

“The food was great and the spirit fantastic. It’s those sorts of things which make this race a must for everyone to do.”

Alma Colyn completed a clean sweep of all seven stages to win the women’s solo category, ahead of Chandre Wertheim Aymes.