Nkhoesa out to settle Berg score 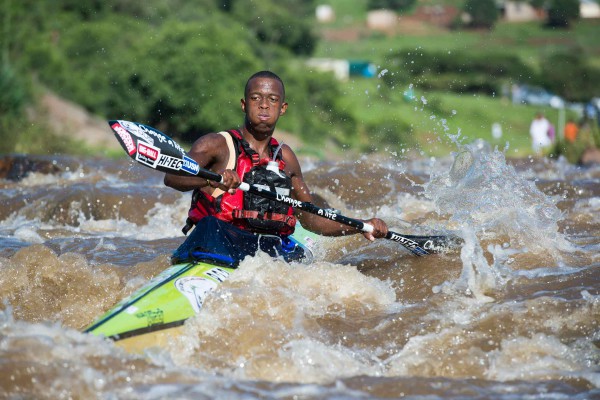 Euro Steel athlete and Computershare Change a Life Academy member, Banetse Nkhoesa is looking forward to returning to the Berg River Canoe Marathon this year after last year’s troubles he suffered during the first and second stage of the race. Anthony Grote/
Gameplan Media

Paarl – Banetse Nkhoesa and Thulani Mbanjwa will lead a competitive crop of Computershare Change a Life Academy paddlers down from KwaZulu-Natal to this year’s Berg River Canoe Marathon, which takes place from Paarl to Velddrif from 13-16 July.

The pair bring with them tremendous pedigree and will look to guide their U23 Change a Life team mates Mmeli Cele, Mthobisi Cele, Siboniso Shozi, Khumbulani Nzimande, Mpilo Zondi, Siyanda Gwamanda, Jabulani Gwamanda, Nkosi Mabasa and U18 youngster, Mvelo Ngidi through the unique challenges of the Western Cape race.

“Going back to Berg after last year’s race is all about unfinished business for me!” confirms Nkhoesa who was brutally forced out of the 2015 race by severe blisters on both hands that left him unable to hold anything, let alone grip his paddle.

“Last year’s Berg was the worst pain I have ever been through during a race; it was even tougher than the Non-Stop Dusi!

“I’m excited to be going back though and I’m really looking forward to taking on the challenge again,” he adds.

Pain and suffering has been a theme of the past twelve months for Nkhoesa who also suffered a harrowing stabbing incident in his home in the Shongweni Valley in KZN in December that not only threatened to derail his much worked towards 2016 FNB Dusi, but nearly ended his life.

Having experienced the pain he did during last year’s Berg and then to have overcome his life threatening attack, the Euro Steel athlete believes he is now stronger than he was before.

“I’ve been told it will take as long as a year for my back to fully recover from the stabbing and recently I’ve had one or two issues, but nothing that has prevented me from paddling.

“It was a really difficult time for me but during my recovery I got to understand myself a lot better, I now live a much better life and I am definitely tougher mentally than I was!”

While striving to continue his progressive form of recent years, Nkhoesa’s Berg build up has been frustratingly hampered by illness.

“I always look to give my best, no matter what race I’m competing in.

“Unfortunately I’ve been pretty sick with bilharzia over the past couple of weeks though; it was touch and go whether I was going to be able to even do Berg.

“I really wanted to do it and so while a top ten may be tough having not trained as well as I would have liked recently, a top twenty is definitely still possible.

“Berg is torture without training, so it’s going to be a long four days, but I’m really looking forward to the challenge!” adds Nkhoesa who makes no secret of the event forming part of his 2017 Dusi top five plans.