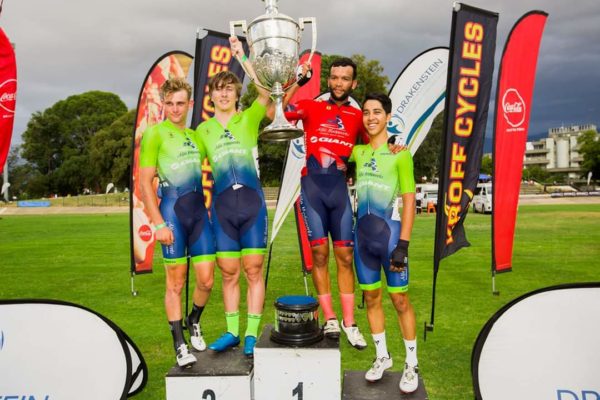 The Alfa Bodyworks riders dominated the podium at last year’s Paarl Boxing Day Track Challenge. The event, which attracts a capacity crowd to the Faure Street Stadium in Paarl, is presented for the 122nd time this year.

The 122nd edition of the Paarl Boxing Day Track Challenge will host a special commercial partner for a fifth consecutive year following the news that Alfa Bodyworks has renewed its sponsorship of Africa’s largest track cycling meeting.

Paarl Boxing Day attracts South Africa’s top professionals as well as a host of international riders who tackle each other for a share of the R100 000 prize purse in front of a capacity crowd of 5000 spectators at the Faure Street Stadium in Paarl.

“Boxing Day doesn’t have its equal in terms of creating a vibe to pay tribute to our top professional cyclists,” says Alfa Bodyworks’ co-owner Moeneeb Fataar.

“It’s a special experience for every rider to race in front of thousands of passionate spectators. This is unique in track cycling in South Africa and a wonderful opportunity for our top riders to get the recognition they deserve.

“It’s an honour for us to be a part of this very special and historic sporting event.”

Paarl Boxing Day is indeed revered worldwide in the sport of cycling. It is the oldest event in all forms of cycling in the world still in existence. The meeting has not skipped a year since its inception in 1897.

The saying goes in Paarl that you might be the best in the world in a certain track cycling event, but it doesn’t mean much if you’re second best in Paarl!

The Alfa Bodyworks dominated the podium last year, clinching all the podium spots in the 25-Mile. Their contingent will again be very strong this year and bolstered by 2017 Boxing Day champion, HB Kruger.

Paarl is without doubt the cradle of track cycling in South-Africa. “Boxing Day, which is presented in conjunction with the City of Drakenstein, is not only the biggest track cycling event in Africa, it’s also one of the most spectated in-stadium sporting events on the continent,” said Hectic Promotions’ Wynand de Villiers.

De Villiers assured that some of the world’s foremost track cyclists will be in Paarl on 26 December this year. “Bringing cycling to the people is the motto of Paarl Boxing Day. Courtesy of the event, Paarl has earned the reputation internationally as a track cycling destination in South Africa,” said De Villiers.

“Our intent, in conjunction with the Drakenstein Municipality, Alfa Bodyworks and other event partners, is to create a unique and very marketable cycling concept to showcase the City of Paarl.”

The meeting concludes with the famous 25 Mile Race and the winner of the final event is regarded as the winner of the day. In addition to the generous prize purse, the Minnaar Cup floating trophy, which dates to 1908, is also up for grabs.

Entries are now open and ticket sales have also opened.

To enter the event, go to www.cycleevents.co.za

To buy tickets, go to www.itickets.co.za

Track cyclists with an international or domestic racing license are permitted to enter and take part in the historic meeting.

Categories that are catered for in the meeting are:

For more information and to enter, go to www.hecticpromotions.co.za