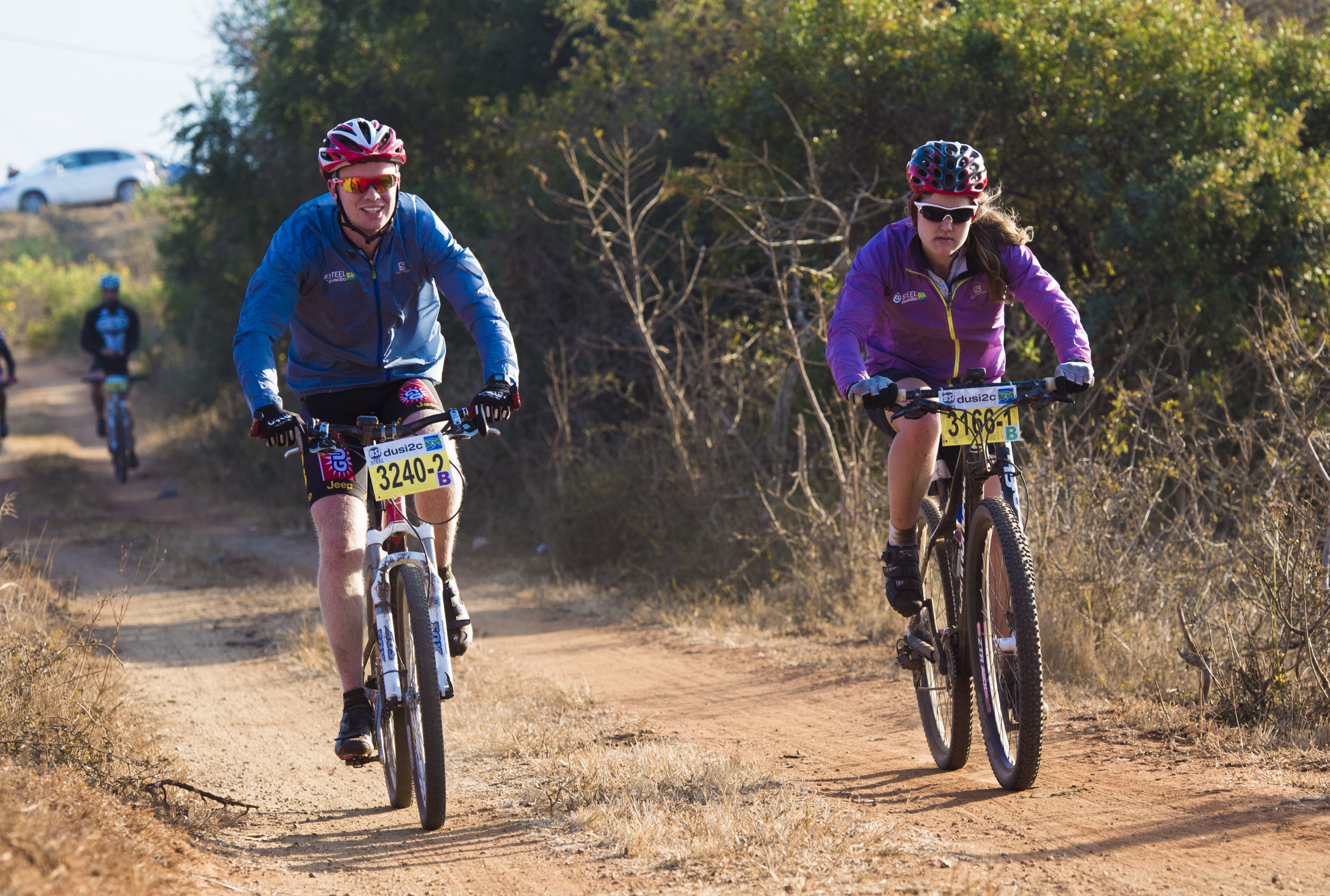 Murray Starr (left) and Tamika Haw (right) are just two of a sizeable group of paddlers looking to blur the lines between sports codes when they take on the 2015 BSi Steel dusi2c MTB stage race this weekend. Anthony Grote/Gameplan Media

Pietermaritzburg – An ever growing number of paddlers have opted to swap their canoes and paddles for mountain bikes ahead of this weekend’s BSi Steel dusi2c stage race from Camps Drift in Pietermaritzburg to Durban’s Blue Lagoon.

“I’m sure all the paddlers that will be taking part in this weekend’s dusi2c know the Valley really well by river having done many Dusis but having spent much of our time in the Valley in a boat, I’m not sure how many would say they know the trails too well,” laughs Dusi gold medallist Mulder.

Mulder, who has a K1 Dusi seventh and tenth place as well as a K2 tenth and eleventh to his name, will take on this weekend’s challenge with colleague and fellow paddling convert Smith.

“Roland and I work together at Republic Sports Adventure in Durban North and he is also a very experienced paddler.

“We both got into triathlon around the same time and with mountain biking being the sport our clients at Republic seem to be most interested in, we naturally then grew into that as well.

“We took up mountain biking just two months before last year’s dusi2c but after completing the Karkloof Classic we decided to try our hand at dusi2c and thoroughly enjoyed it.”

Finishing 2014’s race in a highly respectable 40th position has left the pair highly motivated ahead of this year’s clash as they go in search of an even better return this weekend.

“Last year we finished in just over seven hours and our main goal this year is to shave a bit of time off that.

“It would be really awesome to try get ourselves into the top 20 too but we’re not sure if that is even possible for us at this stage.”

Being surrounded by former and current top paddlers, Mulder and Smith won’t be the only paddling converts hoping for a solid mountain biking effort this weekend.

‘Dusi Duke’ Martin Dreyer will be under the cosh throughout Saturday and Sunday’s journey as he looks to stick to the back wheel of his wife and KZN women’s MTB stand-out Jeannie (USN/Hi-Tec) as the pair look to challenge for the highly competitive mixed team title.

While race founder and organiser Glen Haw ensures the two days go smoothly for all, his three top paddling – and now cycling – children will look to fly the family flag high on the trails.

Sisters Tamika and Bianca claimed the bottom step of the podium at the 2014 Dusi but will now go head to head as they take on the challenge with their respective boyfriends, Gandar and Houston – both top paddlers themselves with Gandar having finished sixth in this year’s Dusi and Drak Challenge alike while Houston made the 2015 Dusi’s fifth position his own.

Haw’s son Murray forms yet another ‘paddling pair’ after he and former Dusi U18 Boys’ runner-up Damon Stamp teamed up together while Under-23 paddling talent Murray Starr tackles this weekend’s dusi2c with Tim Lee.

While some of canoeing racing snakes look to do impress on their wheeled transport this weekend, some of the watersport’s evergreen personalities will take to the start line as well.

Owen Hemingway – the only person to have completed all 22 editions of the N3TC Drak Challenge and 27-time Dusi Canoe Marathon finisher – will take to the trails with DUCT River Riders team mate Han van Aardenne.

Eric Bothma – himself a 27-time Dusi finisher and whose 19 finishes sees him the proud owner of the title of most Non-Stop Dusi finishes – is another paddling character set to enjoy the dusi2c’s trails this weekend when he competes with Subaru Toppies team mate Mark Christie.