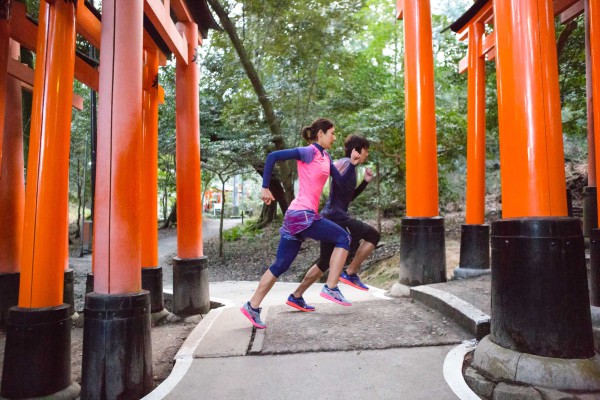 Cape Town, South Africa (16 February 2015) – Today PUMA launched the IGNITE Your City film series after unveiling the new-to-market PUMA IGNITE running shoe a week prior. IGNITE Your City features ten global running crews as they ignite their respective cities by pushing the boundaries of their run while wearing the new PUMA IGNITE. They do it for the bragging rights, to accomplish their dream run, to inspire their city’s greater running community and for the joy of pushing their runs to new heights.

Starting in Tokyo, the runners took off to Kyoto, the first stop of their run. After a quick warm-up at the Fushimi Inari Taisha shrine in Kyoto, they raced through the city, logging their first 5K before hopping back on the high-speed train.

Next up was the fea fields of Shizouka with Mount Fuji looming in the distance. A race through the cityscapes of Nagoya followed, and their final stop before heading back to Tokyo was the uphill park trails to the castle in Hamamatsu. One last high-speed train ride dropped them back off where they began in Tokyo. Winding through tight streets and trafficked intersections, they made their way to a celebratory finish in Shibuya Crossing.

This film series speaks to the technology of the PUMA IGNITE running shoe, which provides maximum energy return. “The Ignite Your City concept was designed to empower and inspire runners on a local basis in major cities around the world,” said Adam Petrick, Global Marketing Director at PUMA. “These films, and the social conversations around them, reflect the energy return benefit of the IGNITE technology itself by exciting runners with epic runs they wouldn’t necessarily have access to themselves. For us, the series is focused on demonstrating the powerful impact the IGNITE product can have in taking your run to the next level. We hope these films inspire runners around the world to ignite their cities, and ignite their own runs.”

Follow the Ignite Your City journey as it makes its way to ten cities around the world this year.