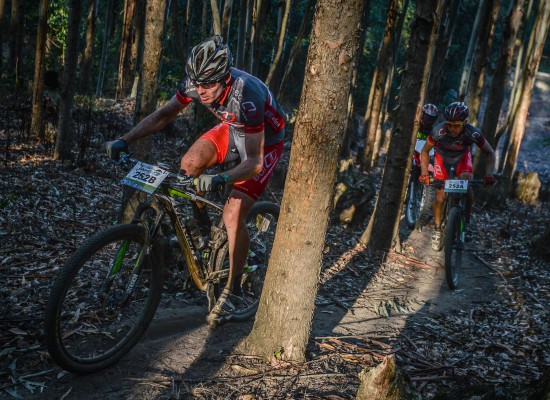 Gawie Combrinck (left) and Johann Rabie will set out to defend their title at the nine-day Old Mutual joBerg2c mountain bike race, which starts in Heidelberg south of Johannesburg on April 24. Photo: Full Stop Communications

Defending champions Johann Rabie and Gawie Combrinck will be gunning for a second Old Mutual joBerg2c title when the nine-day mountain bike race fires its opening shot near Heidelberg on the outskirts of Johannesburg on April 24.

Rabie and Combrinck will headline a field of 800 riders for the 950km stage race, which crosses four of South Africa’s nine provinces en route to the Indian Ocean.

The EAI Cycling pair appear to be on dangerous form after finishing second in the African jersey competition and sixth overall at last month’s Cape Epic.

“We were very happy with our performance there and achieved the goals we set for ourselves,” said Rabie of his and Combrinck’s result.

The Epic took its physical toll however, as he was forced to rest and recover from a bout of flu after the event.

“I took a few days off but I’m back to training hard for joBerg2c now.”

A former roadie, Rabie is widely regarded as one of South Africa’s most consistent tour riders, with victories in the Tour de Free State and Le Coq Sportif Tour and podiums in the Giro del Capo, Tour of South Africa and Tour du Maroc.

“I also had a few SA medals in my career on the road but now I am enjoying the mountain biking much more.”

The 28-year-old said his tour riding skills had translated well into his newfound off-road racing career, which saw him take the joBerg2c title in his first outing at the event and then go on to podium in the sani2c and Cape Pioneer Trek.

“I think you get a lot of power from the road and tactics are also a big factor that you learn there.”

According to Rabie, the first three stages through the Free State certainly favoured road riders with long days in the saddle over relatively flat terrain.

“But it’s in the latter stages through the mountains of KwaZulu-Natal where things really start to count.”

Last year, he and Combrinck took three stage wins en route to overall victory but would not be setting store by those daily benchmarks, he said.

“Our aim is the overall win. We’re not too concerned about the stages – if they come it’s a bonus.”

The 2014 edition was characterised by a to-and-fro battle with Waylon Woolcock and Darren Lill who took four stage wins and the overall lead into the final stage before serious mechanical issues saw the title slip from their grasp.

“It’s such a long race that you need some luck too,” said Rabie.

“And if it’s not in your favour, you can lose tons of time even if you are the strongest.”

He said the race would only be won when the teams crossed the finish line on the last day at the South Coast resort town of Scottburgh.