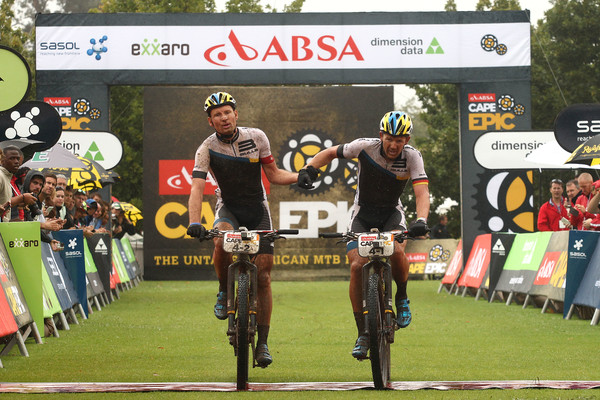 One of the top professionals in the field, Kargo Pro MTB’s Emil Lindgren, was out of the race after crashing on a descent off the flank of the Groenlandberg and breaking his arm. He was riding with South African Brendon Davids, who will have to soldier on as an Outcast – professional riders who can continue to take part but not compete or influence the outcome of the race.

The Women’s category continued to be dominated by the Swiss/Danish combination of Ariane Kleinhans and Annika Langvad (RECM), who already have a 20-minute gap over their closest challengers.

The day was a tough one for riders throughout the field, with some 2 800m of vertical gain through the stage and then a steady drizzle which made surfaces slippery and occasionally treacherous. 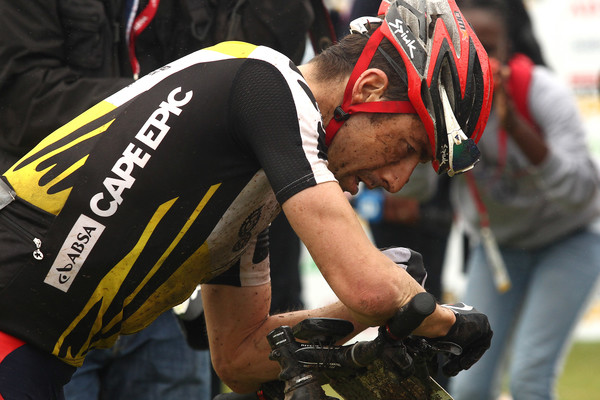 “I felt under pressure today because I didn’t have a good prologue,” said Sauser. “I felt super comfortable going over Groenlandberg (the major climb of the day). I was in control.” He added, however, that “you can’t control the downhill” and that is where he picked up the puncture.

Overnight yellow zebra jersey leaders Fabian Giger and Martin Gujan, both of Switzerland, dropped back to fifth place, as had been expected of the cross country specialists on the longer marathon-type stage.

In the women’s race Kleinhans and Langvad survived a crash scare to charge home and into the orange leader’s jersey once again, opening up an overall gap of just over 20 minutes on second-placed Jennie Stenerhag (Sweden) and Robyn de Groot (South Africa) of Team Ascendis. Meerendal Wheeler’s Esther Suss of Switzerland and Alice Pirard of Belgium finished third on the 113km Stage 1, moving into third on the overall standings at the same time.

Kleinhans fell on the stage while overtaking some slower riders, but shrugged it off as a minor mishap on an otherwise dominant day: “The crash was just something silly – maybe blame the pine cones – luckily it was nothing serious, though. It was a very hard first stage. Besides the small crash we managed to stay problem-free out there.”

Team RECM admits that they came into the Cape Epic with the goal of winning it, so both riders are thrilled with their racing so far. “It feels wonderful to be on the podium again,” says Langvad. “We want to win this race, it’s a huge season goal for Ariane, and right now it feels like we are on track.”

The day started out dry and dusty, with vision on the route poor at times due to bikes kicking up dust. “It was a funny day,” said Langvad. “It was very dusty and loose in the beginning, and then once we went over the mountain it was cold and rainy. I survived the Danish winter okay, but I wasn’t prepared for this.”

Second-placed team on the day, Ascendis Health, started the race with no major expectations and are taking the race day-by-day. However, their form in the Prologue and Stage 1 has been impressive and both riders are happy to be in the top three so far. “It was hard out there, especially when the rain came,” said De Groot. “We are riding well together and we had another good day, though we did feel it in the legs towards the end.”

And that was not the end of their bad luck: “Only five kilometres into the stage my back brakes gave out. But you have to play the cards you are dealt … we are stoked to still be in the Absa African special jersey.”

The jersey, for the first team from the continent to win, has become much sought after in recent years. Yesterday RED-E Blend’s South African pairing of Darren Lill and Waylon Woolcock broke away from their fellow riders but were caught towards the end of the stage by Walker and Croeser and dropped to fourth of the African teams. Lill looked to be out of sorts and struggling on hills towards the end of the stage.

“There were so many climbs today … it was a hard and tough stage,” said Bucher. South African pairings Izak Visagie and Linus van Onselen (Nampak) and Greg Andersen and Andrew Mclean (Ascendis Health) were second and third respectively.

Meawhile, Mixed category leaders Rene Haselbacher and Sabine Sommer (ENS RH77) extended their lead to over 10 minutes: “It feels really good to be in the lead,” said former Tour de France rider Haselbacher. “I am very grateful I have a strong partner because I am not a great climber, and with all the climbs today it could have been really bad.”