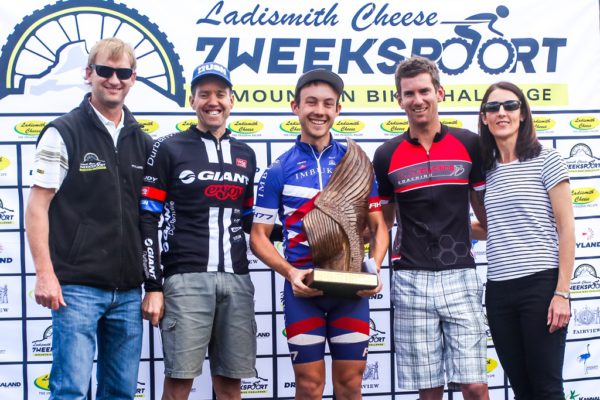 Dylan Rebello and Yolande de Villiers raced to victories in the men’s and women’s categories in the Ladismith Cheese 7Weekspoort mountain bike challenge on Saturday the 1st of October. The single day marathon, through the magnificent Seweweekspoort and the scenic Hoeko Valley, doubled as the Western Province Marathon Championships. The event boasted a combined starting line-up of 1 055 riders, including 100 local development riders sponsored by Ladismith Cheese, across the three distances.

Rebello, now riding in the colours of Imbuko Wines, excelled in the absence of his new teammate and defending champion Chris Wolhuter leading from start to finish. Climbing up the Seweweekspoort towards the Great Karoo Rebello was content to sit in the lead group, but once the route reached the rugged trails at the top of the poort only David Garrett could match his pace. The pair then worked together to stay ahead of the chasing pack, which included riders of the class of Nico Pfitzenmaier and Niell Ungerer. In the approach to water point three, with two long climbs remaining, Rebello accelerated on a sharp climb through the orchards in the Hoeko Valley. Garrett was unable to match Rebello on the climb and soon dropped out of sight of the leader. Rebello soloed to victory and said afterward that the Ladismith Cheese 7Weekspoort MTB Challenge was the perfect tune-up for the Cape Pioneer Trek. He and Wolhuter will be targeting a podium at Dryland Event Management’s flagship stage race, which will take place from the 16th to the 22nd of October; if Wolhuter can recover from the broken hand, which forced him out of the 7Weekspoort MTB Challenge, in time. 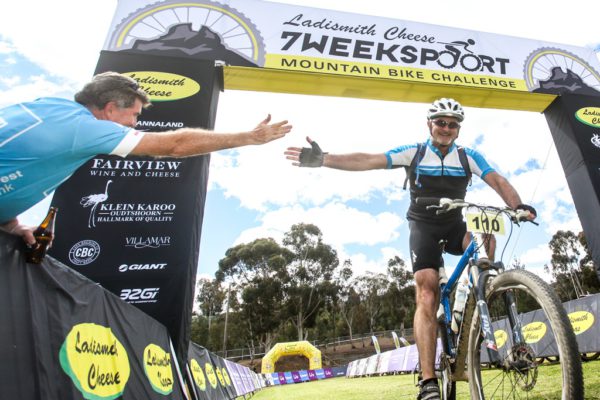 An 82km marathon finisher gets a high five from an earlier finisher of the Ladismith Cheese 7Weekspoort MTB Challenge, on the 1st October 2016
Photo by: /Oakpics/ SPORTZPICS
{dem16gst}

Garrett claimed the second step on the podium, finishing three minutes and fifty seconds down on Rebello’s winning time of two hours, fifty minutes and thirty five seconds. Rounding out the podium was Pieter Gildenhuys, who outsprinted Ungerer and Vickus Boshoff in a dramatic finish.

In the women’s race de Villiers was largely unchallenged as her nearest rival Fienie Barnard was never able to join de Villiers’ group on the road. Despite not being pushed by a rival for victory de Villiers flew through the route, finishing in a remarkably fast time of three hours, four minutes and twenty seconds; despite the swirling wind making the descent of the poort slower than usual. Barnard claimed second position in the women’s race while last year’s winner, Alma Colyn was third. 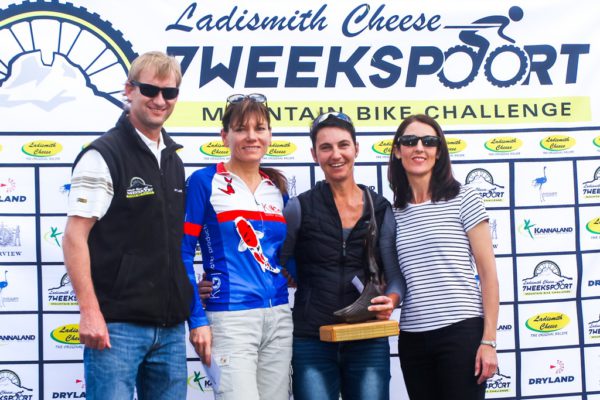 With Western Province colours on offer for the age group racers the 26km and 40km races were also hotly contested among the younger riders while the veteran, masters and grand-masters were out in force to race for provincial glory in the full 82km marathon. The impressive young Joshua de Freitas and Amy Tait held off their age group rivals and the older riders taking part in the 40km race to claim hard fought victories, by just a single second in de Freitas’ case and a mere three seconds in Tait’s.

The race once again showcased the riding and tourism potential of the Kannaland area; hopefully inspiring the 900 odd entrants to return for a weekend of riding and sightseeing before next year’s Ladismith Cheese 7Weekspoort Mountain Bike Challenge, which is set to take place on the 30th of September 2017.