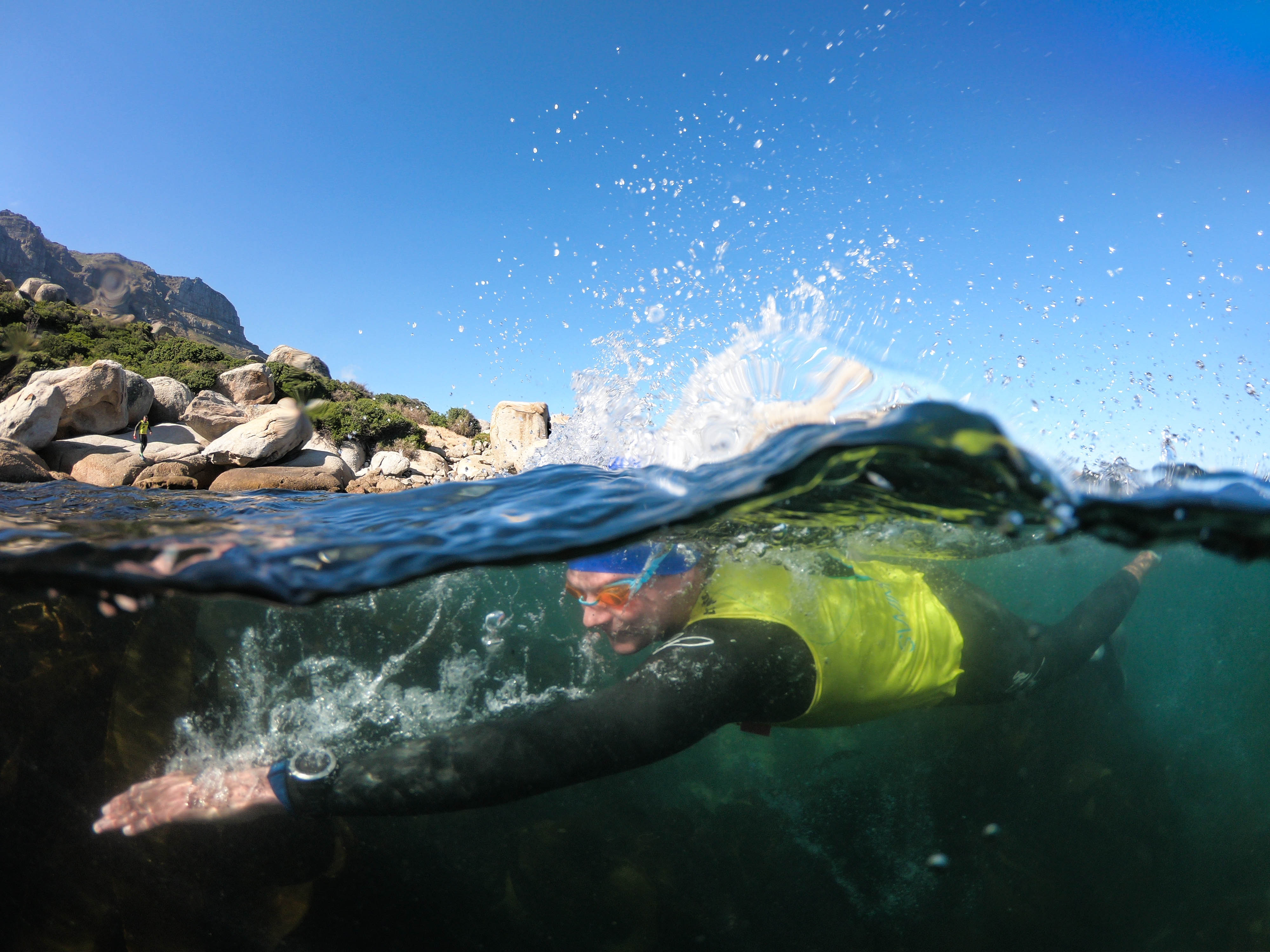 Conditions in the water were challenging due to a strong Southeaster, with both triathletes and lifesavers making up the bulk of the field tackling the 16km course from Sandy Bay to Clifton. There are no transitions in swimrunning – athletes run in their wetsuits and swim in their running shoes.
Men
Young triathletes Nick Quenet and Jamie Riddle broke the 2-hour barrier with a time of 1:55:01, taking over 5 minutes off the previous record of 2:00:18.

“We knew it was going to be a tight race, we worked really well together and complemented each other in the swims and the runs. We didn’t enter the water first for the first swim, so we knew we had our work cut out for us. All in all a very tough race,” said Quenet.

Dylan Pivo and Riaan Shaw came second, despite Riaan losing a shoe in the water and having to run with bare feet: “We were exactly the same speed, running and swimming, which helped a lot. We may not be the fastest but we raced really well together,” they said.

Calvin Amor and Shane Fourie, one of the Llandudno Surf Lifesaving teams, came third: “It was a lot harder than last year, with longer swims, nice and technical. On the long swim we were pushed out to sea, fighting with the kelp on the inside. Competition was a lot tougher, a lot higher this year, so it was good to push ourselves.”

The Cooke brothers from Port Elizabeth, Keegan and Jarryd Cooke, were fourth. Race favourite Michael Lord, who had to find a replacement partner Llewelyn Groenewald in race week after JP Burger withdrew, pulled out during the course of the race.
Women
Vicky Van Der Merwe, an experienced triathlete but new to Torpedo SwimRun, was ably led by Alexandra  Quenet for the team to take just over a minute off the previous Women’s record in a time of 2:25:20.

The two agreed that they had worked very well as a team, with van der Merwe crediting her partner with strength in the swimming: “Being my first Torpedo SwimRun, we decided to go out quite conservatively. Alex is a very good swimmer so I had paddles on and tried to sit on her feet as much as possible. So Alex did most of the work on the swims, and then we ran really well together,” she said.

Second place was taken by Bianca Tarboton and Lauren Granger, one of the Llandudno Surf Lifesaving teams: “The wind was a big factor but the salt water makes your shoes more buoyant than the freshwater we experienced in the Torpedo SwimRun Wild, which helps. It is good to race on our home turf.”

Jacqueline Vockins and Karen Graaf were placed third, in the same position as last year, and Alessandra Bayly and Christina Geromont, winners of the the Inaugural Torpedo SwimRun, were fourth.

Race Director Richard McMartin said they were thrilled with the outcomes. “In the Men’s and the Women’s, records have tumbled, with some top triathletes coming and racing. We introduced prize money this year and it has really brought the level of competition up a notch. The pumping Southeaster made conditions tricky, but we have a lot of excited people ready for next year.”

SwimRun gaining international attention
Andrew Maclean is originally from Scotland but has been living in Sweden for the past 15 years, where swimrun as a sport originated. He has done about 50 swimruns worldwide since 2013, including two Otillo Swimrun World Championships. His brother Robert lives in Johannesburg and the two met up in Cape Town to take on Torpedo SwimRun: “It was an amazing experience. Extremely surprised we finished in 12th place overall in my brother’s first ever swimrun race. I highly recommend this well organized and adventurous race; very cold water, hot runs, massive kelp forests to swim through. We didn’t see any sharks but we did see a seal near the finish line.”

Former Springbok Rugby Players Robbie Fleck, Corne Krige and Ollie le Roux took part, and Robbie Fleck came fourth in the Mixed category with his race partner Keri Espey: “The wind made it pretty tough, but what a special experience. You see parts of Cape Town that you never really appreciate. You get tested to the limits.”

Llandudno lifesavers Rob Shaff and Rob Tweddle were expected to podium, but found themselves coming to the aid of a swimrunner struggling against the current. “As we were leaving the water at Sandy Bay we saw a guy in distress, he had lost his cap and was panicking, so we led him to the cameraman on a boogy board who could help him to safety,” says Rob Tweddle.