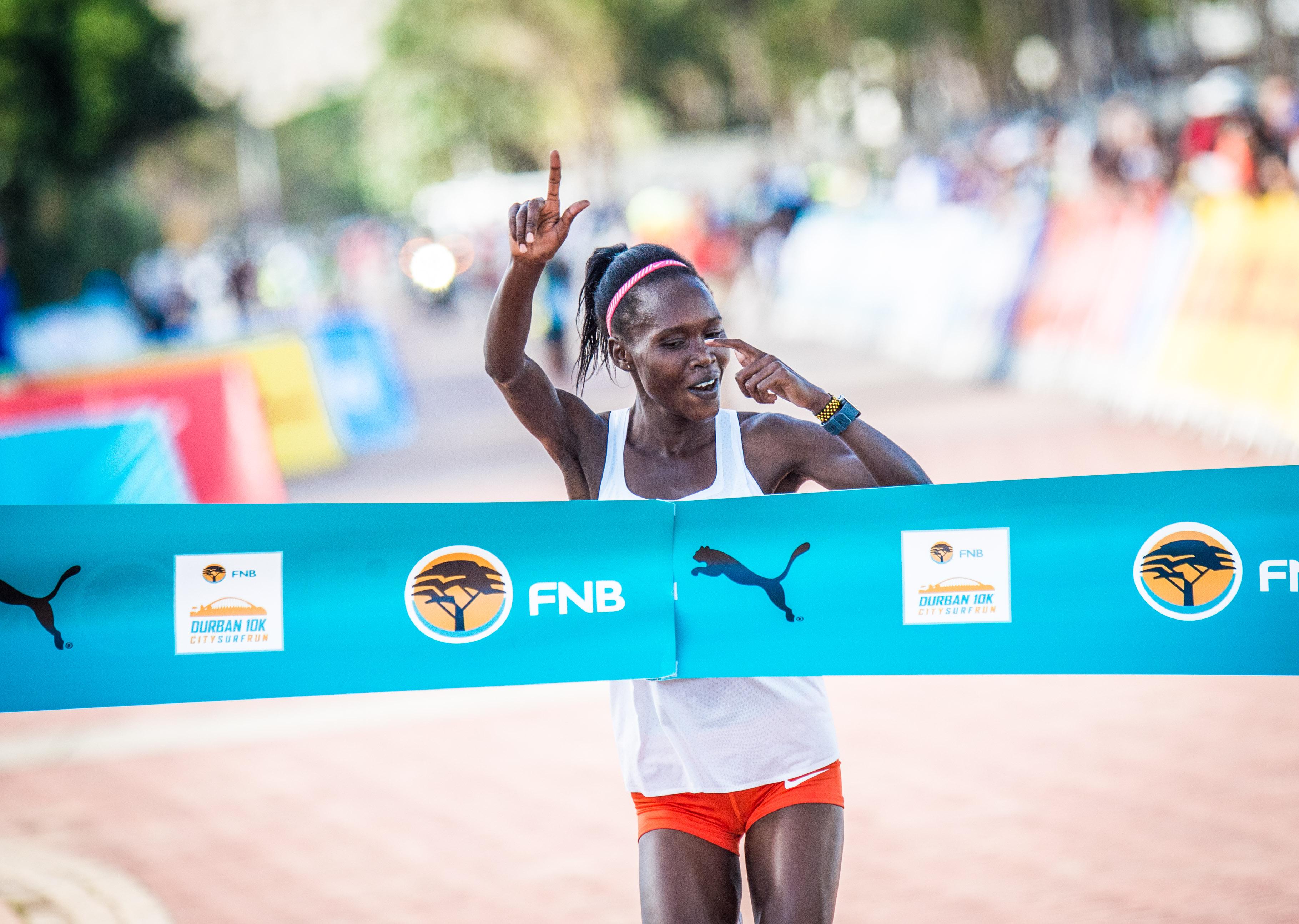 Perfect weather conditions, a fast route and a deep field resulted in a plethora of records tumbling at the 2ndannual FNB Durban 10K CITYSURFRUN on Sunday, 14 October 2018.

Joshua Cheptegei broke his own course record and with that the Ugandan Record and the SA All Comers record on the day.  Swiss sensation, Julien Wanders broke both the Swiss National 10km record and the European 10km record by finishing second. Stella Chesang in winning, smashed the women’s course record, the Ugandan National 10km Record, and came within one second of the SA All Comers record.

The first kilometre went by in 2:43, with this metronomic pace maintained throughout the entire race. By 3km the lead bunch had been whittled down to seven, with the foreign contingent led by Joshua Cheptegei, driving the pace hard. The clock read 8:14. Halfway came and went in 13:48, but by then, only Wanders was able to stick with the furious tempo set by Cheptegei who had come to Durban on a mission. His target was 27:20, but at this rate, he was on course for an even faster time than that. By 8km even Julien Wanders, who was having the race of his life, had to concede to the relentless onslaught of Cheptegei.  With Wanders falling back, the Ugandan was left to fly solo to the finish line on the Durban Promenade.

Cheptegei flew across the finish line in 27:16 for the second fastest time globally in 2018 and the fastest on the continent this year. In doing so he took 12 seconds off the previous record and announced his return to form from injury in emphatic fashion.

“I am really happy with today. The knee is now 100% and today’s time shows me I am in better shape than I thought,” said Cheptegei after the race. “I said at the Press Conference on Friday that I wanted 27:20 or better, but I did not expect to go this much better.”

An ecstatic Julien Wanders shattered his best ever 10km time by 30 seconds. The Swiss athlete went under 28 minutes for the first time in emphatic fashion, screaming home in 27:32 for second place, one place better than in 2017.

Kenya’s Moses Koech rounded out the top three finishing in 27:46. In 6thplace, Stephen Mokoka, despite running a Marathon three weeks ago, was again the best South African, clocking 28:18. New kid on the block, 20-year-old Ryan Mphahlele smashed his personal best of 30:31 to finish in 28:46.

Stella Chesang was in no mood to play around and bolted away as soon as the gun went. She did not wait for any of the other female runners, taking the race by the scruff of the neck and leading from start to finish, beating the defending champion, Mercyline Chelangat by a 19 second margin to cross the line in 31:14, missing Elana van Zyl Meyer’s All Comers Record by a mere second. (Van Zyl Meyer clocked 31:13 in Budapest in October, 2001).

Chesang went through 3km in 9:07, halfway in 15:29 and 7km in 22:15. By 3km she already had a 6 second lead on Chelangat and South Africa’s Irvette van Zyl. By 5km that gap had grown to 11 and 17 seconds respectively. Chesang progressively moved further and further away, her only competition, the clock.

“I felt I was in good shape, so when the gun went off, I just went,” said Chesang. “No one came with but I felt good, so I just kept on going. This is a big result for me.  I took 30 seconds off my best, so it really was a good day at the office for me.”

Irvette van Zyl had a sub 32 time in her sights coming into Durban, and missed it by the narrowest of margins, clocking 32:06 – the fastest time by a South African since the SA Record time of Elana van Zyl Meyer (31:13).

“I went out a bit too hard in the beginning and I think that cost me,” said Van Zyl.  “It is bitter sweet, because it is so close, but I have to be satisfied with my form. It is a massive PB (14 seconds), so that is at least something, but it was so close.”

87-year-old Deidre Larkin continued to astound, as she set a new age group world record of 1:00.04.

“Over 6500 runners and walkers gathered at the FNB Durban 10K CITYSURFRUN to run their city their way. This year we are celebrating 180 years of existence at FNB – the race epitomizes the journey we’ve had over the years. This is not just any other race but a community event that enables people from all over the world to experience this beautiful City.  Congratulations to all the athletes for their competitive spirits and a very special congratulations to the winners, Joshua Cheptegei and Stella Chesang, for the sterling resultsand to the 25 runners who competed in all three events in the FNB RUN YOUR CITY SERIES in 2018,” says Michael Honeywell from FNB Business in KZN.

CHARITY SUPPORT:  When entering online runners (and walkers) could support one of five Durban based charities:  1. The Reach For A Dream Foundation, 2. TREE, 3. Durban & Coast SPCA, 4. LIV Villageand/or 5. iThemba Lethu.

EXCITING NEWS:  Wilson Kipketer, former 800m world record holder, participated in the 2018 FNB Durban 10K CITYSURFRUN on Sunday, 14 October 2018.  Kipketer who is employed by race sponsor, PUMA and won gold at three successive World Championships, was brought to SA to inspire runners to bring their best to the event.

EXCITING ON ROUTE ACTIVATION: PUMA South Africa threw down the gauntlet challenging runners to ‘Beat Bolt’ at the 2ndannual FNB Durban 10KCITYSURFRUN.   The ‘Beat Bolt’ Sprint required speed.  Runners were encouraged to give their all over a 100m sprint.  This section of the route was timed.  The runner (male and female) to clock the fastest time over  the 100m was rewarded with a PUMA shopping voucher to the value of R10 000.