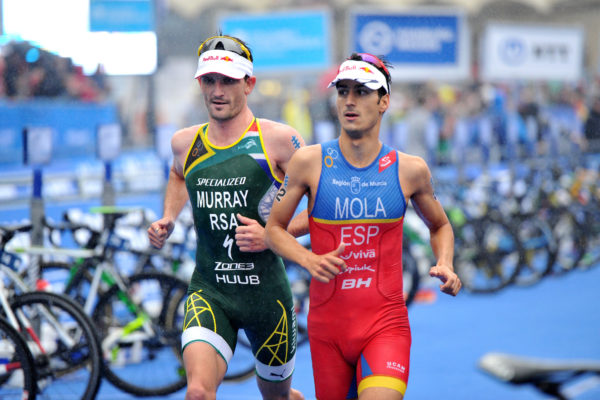 Richard Murray showed with his first triathlon race back after he broke his collarbone in April that he will be ready for the Olympic Games come August in Rio.

Once again the WTS Hamburg proved to be a less than happy race for Murray. Like last year he got a time penalty. This time the 10 seconds cost him, Mario Mola and the spectators a chance at an out and out foot race to the finish-line between the two best sprinters on the world triathlon stage. Murray had no idea about the penalty and when he realised he stopped for the 10 seconds and asked the official for an explanation but none was given. The always emotional and passionate Murray showed his anger and frustration with the situation and in the end his second place was taken away and he was disqualified for unsportsmanlike behaviour.

Murray’s penalty was because he by accident put his wetsuit in the wrong box at the transition point after the swim.

“I was so angry because I did not know what the penalty was for at that stage. Not knowing why I had a penalty was very frustrating and having to miss out on a footrace with Mario was so disappointing,” said Murray. “I lost my cool as I ran towards the finish, but it was in the heat of the moment. I do realise that getting this angry will have repercussions, but I think it would be nice if the reason for the penalty were communicated to the athletes. Only fair I think. It was not nice seeing another athlete standing on the podium in my second place. I should have controlled the situation better.”

Before all this drama the race was going kind of perfect for Murray. He had a great swim, controlled bike-leg and then he and Mola took the race away from everyone else by running like only they can. Their times over the 5km run leg were 14 minutes and 17 seconds.

“I am really happy with how my body felt and how everything came together on the day. The swimming is almost there and I felt amazing during the race.”

Murray only had two races – the World Duathlon Championships and Saturday’s race – before Rio after he crashed in Australia in April. He was included in Team South Africa for Rio last Thursday and showed on Saturday in Hamburg that the crash did not ruin his medal chances.