Riders to test themselves in two-stage Paarl race 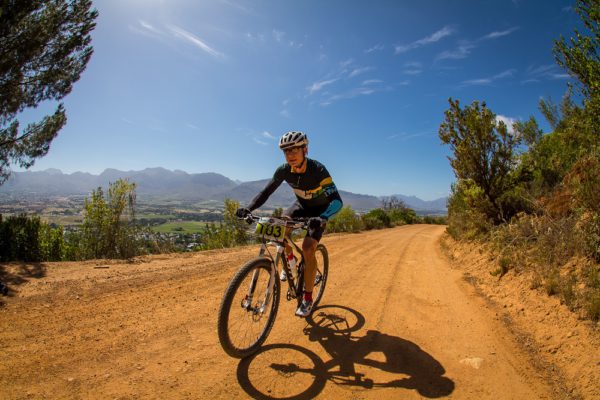 Riders can look forward to some exciting new sections when the Sanlam MTB Invitational two-stage race takes place near Paarl on November 19 and 20. Photo: Supplied

Mountain bikers will have a rare opportunity to compete in a two-day stage race when the Sanlam MTB Invitational is held at Rhebokskloof Wine Estate near Paarl on November 19 and 20.

Previously a one-day event, route director Darren Herbst said he and ASG Events chief executive Wynand de Villiers had felt there was a gap in the market for a race of this nature over a weekend.

“I think there’s a demand for two-day stage races, as opposed to the traditional three-day or even longer ones.

“With the stunning terrain around the mountain and what we have to offer, Wynand and I felt this was the perfect event to do it. So we have taken the chance to see how it goes.”

Herbst said race organisers were seldom completely satisfied with their product but admitted he was excited about the mix of trails for this year’s Sanlam MTB Invitational.

He and his team have been hard at work for the past three months creating some new sections around Paarl Mountain, as well as improving existing tracks.

Herbst said most of these were incorporated in the first stage over 60km, while the second day of 40km would be largely similar to last year as it “worked well”.
The first stage circumvents the entire mountain anti-clockwise from Rhebokskloof, with the notable addition of some trails on the Suid-Agter Paarl side, which connects Rhebokskloof with Spice Route Estate without having to summit the mountain.

“As a route director, nothing is ever perfect,” said Herbst.

“After every race you sit down to analyse things and you feel you could have done this or that better. Then you add the riders’ comments and try to keep improving the route.”

Herbst said to his knowledge nobody had ever created a trail around Paarl Mountain. According to him, the route consisted of single and jeep track as well as contour roads.

“My thinking was that, especially on the southern side of Paarl, the views traversing the mountain are so spectacular you almost don’t want too much single-track where you have to concentrate on the route and miss out on the scenery.

He added that day one went through a vast variety of terrain as the farms encompassed more than just vineyards.

“There is great diversity such as olive orchards, cattle farms, lucerne fields and nuts,” said Herbst.

“The land has been owned by generations of farmers and it is their pride and joy.

“They have looked after their properties so well and the type of terrain you are going through is absolutely spectacular. We are excited about that.”

He said they had created some new sections from Rhebokskloof to the Spice Route and had re-sculpted the second stage route to make for faster-flowing single-track.

“There are one or two stings in the tail like a few gorges to go through and some tough climbs, but if the guys take it in their stride they will enjoy it.”

From a Sanlam and ASG point of view, Herbst said they had listened to what the riders had said and adapted some of last year’s sections of what will now be stage two.

“So many people want to ride that single-track but have been too nervous because there are some tricky sections.

“To accommodate everyone, we have widened the single-track and made some amendments which makes it much more flowing and a better experience.”

He added that they had reduced the amount of climbing on this stage to balance the route out as “there are some big climbs”.

They had negotiated, he said, with 52 landowners to set up the route, which had presented its own issues.

“There were challenges because if just even one landowner doesn’t buy in to your idea, it is back to the drawing board.

“But Paarl is a spectacular place and everyone works together. The majority of landowners are very excited about it and gave us great support.”

Herbst said they were still finalising the waterpoints but added they would probably have four on the first day and three on the second.