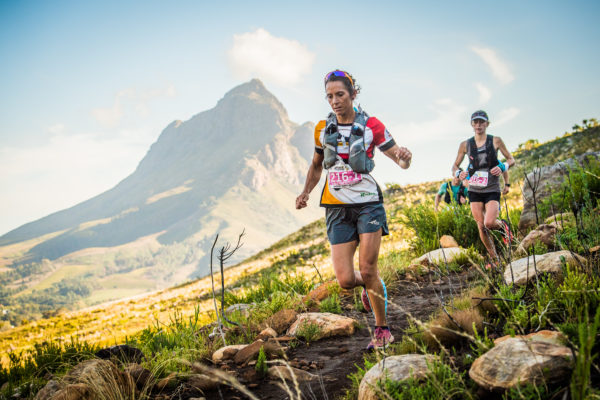 According to Calitz, the stage was by no means easy.  “We felt it today.  For once I was stronger than Bernie on the climbs, but he still pulled me on the flats.  A 30-second lead is not much.  With Sunday’s Stage (Day Three) being shorter, we know that Lucky Miya and Thabang Madiba will push hard.  We had to make our gap today.  We took the lead from the start.  We spoke all the way making sure that both of us were ok.  I always say that the friendship is more important than the win.”

“Our plan was to push hard today,” admits Rukadza.  “My legs felt ok.  Before the start AJ and I had a chat.  We just stuck to our game-plan.  AJ was strong on the up hills.  That is where he pulled me.  When we’re in front of the group, I took the lead.   We’re happy to take the stage victory.”

“Today’s stage was hotter than yesterday,” says Griffioen.  “The route was also flatter, which isn’t our strong point.  The girls kept with us.  We pulled away on a climb and managed to keep our lead”.

“Every time that I do AfricanX I realise that I am not fit enough for the distance,” laughs Van Huyssteen.  “I’ll have to make a mental note for next year.  Nicolette is super strong and helped me a lot today.  We have a very good partnership.  We used our strengths and pushed on the descents.  We’re happy to open the gap going into Stage Three.  It’ll help a lot.  We’ll run with what we have and try to protect the gap.”

“I can’t decide which was tougher, Stage One or Stage Two,” says Feldmann.  “This stage had a crazy climb.  We’ve got a pretty good lead.  Tomorrow we’ll just run our own race and keep it consistent.”

“We didn’t lead from the start today, but instead switched places a number of times,” says Del Fante.  “We stuck to our plan which was to keep it steady and run our own race.  Our plan worked.  We’ll just do the same tomorrow.”

The AfricanX Trailrun is a three day stage trail run that requires teams of two runners (male/female/mixed) to battle it out on a route that varies in distance between 20km – 36km each day.  Teamwork and endurance is put to the test.

SANET WENTZEL SPIRIT AWARD:  Introduced in memory of a fallen athlete, the ‘Sanet Wentzel Spirit honours AfricanX entrants who persevere irrespective of the adversity that they face.

BEST DRESSED COMPETITION:  Although all three stages of the AfricanX Trailrun are equally special, Stage Two features ‘that extra flair’ with trail runners allowing their creative sides to get the better of them as they try to outdo their rivals in the AfricanX’s “Best Dressed” competition.  With awesome sponsor prizes up for grabs, “Dress Up Day” is sure to be the source of much excitement.