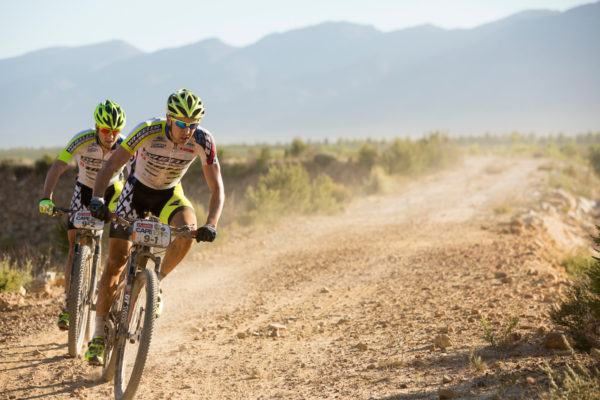 No all-South African team has won the Absa Cape Epic overall, but riders from this country have enjoyed success across many categories when partnered with foreigners. Most notable among these was Burry Stander, who triumphed three times with Switzerland’s Christoph Sauser.

Knox, 29, represents the current generation of marathon specialists and was in compelling form in 2016. Beers is only 23 and his natural ability and appetite for hard work suggest he will be a star of the next generation.

“Obviously the overall win is our main objective. But with it being a very new partnership with Leo and being the Cape Epic, where so much can go wrong, that will be a big challenge, says Knox, who  won both the South African marathon championship and the National Marathon Series in 2016.

“If we end up on another step of the overall podium that will be good, but the win is our main objective. Some stage wins may present themselves if we are in the mix for the overall, we will grab those opportunities of course,” says Knox, a seven-times Cape Epic finisher.

Páez concurs: “I am going to try and win the race overall. I am going to rely on Max for the knowledge of the race and the conditions.”

The Colombian was leading the Marathon World Championships in 2016 before a mechanical ended his title aspirations. Now he has set his sights on the world’s foremost mountain bike stage race.

“I have heard a lot about the Cape Epic. I know it is the toughest stage race in the world and the most important one to win. If you are a serious mountain bike racer you must try to compete in the Cape Epic at least once,” Páez says. “I am looking forward to this experience. I have seen videos of the race on the internet and can see that it can be very hot and dry and that the surfaces are very rough in places. This means you need to look after your body and your bike every day or else you will be in trouble.”

The fact that Knox and Páez are deadly serious is also evident in the fact that they will bring a support team: Italians Mirko Pirazzoli and Alessandro Gambino will back them up over the eight days and be on hand to help sort out mechanical issues if required.

Looser and Beers have been putting in the hours in training but are cautious about making any predictions: “We are definitely not (among the favourites) for the overall podium, but I hope we can use this to our benefit and start the race with little pressure … which will maybe help us to calm down before the race,” laughs the Swiss star. “Personally, I think we should be able to finish the General Classification somewhere in the top 10, but our main goal will be to get on the podium on some stages.”

Beers will bring his local knowledge to the partnership, but Looser has also been a familiar  – and often successful – figure at stage races in the country in recent years.

Beers says of the 2017 route: “I know a lot of the riding in those areas, especially Grabouw and Hermanus as I’ve done quite a few local races through those areas. It’s going to be extremely physically challenging, that’s for sure. You really have to work the bike on the trails around there. I actually haven’t ridden in Greyton but I’ve heard it’s tough with super steep climbs.

“I think the route this year is really going to separate the men from the boys, and I hope I’m one of those men.”

Knox thinks it will suit him and Páez. “It looks like a balanced but challenging route,” he says. “I like that there is quite a high ratio of climbing and that there aren’t many places where guys can hide in a bunch. Lots of singletrack suits us, as does lots of climbing –  especially steep, technical climbs. I think it’s a route that we can do well on.”

He and Páez will only train together for  total of 10 days before the Cape Epic, but Knox is not too concerned: “I will meet Leo in person for the first time in early March when he flies out here to prepare. He is one of the world’s best marathon racers, having two thirds and a fourth at the Marathon World Champs in recent years. We are both strong climbers and with cross country racing backgrounds are both skilled enough to race technical descents and singletrack well.

“Leo doesn’t speak much English and I don’t speak Spanish, so communication could be a challenge,” admits Knox. “But at the end of the day, we are both mountain bike racers with the same objectives and that will hopefully be enough.”

Beers explained how he and Looser came to race together: “We don’t have teammates here in SA to partner with for stage races. We have raced (against each other) in the past and did well and we get on really well, so we chatted at one of the races and said let’s try be teammates for stage races in SA. Through the help and support of my sponsors we managed to get it right.”

His partner Looser, a four-time Cape Epic finisher, says his mountain biking dream is to finish in the race’s top three: “For me, it’s still the biggest and most prestigious race in the world of marathon mountain biking. As long as I’m riding, it will be my dream to finish this race once on the GC podium. The race, the route … everything is so challenging and I really like to test myself in the hardest race of the world.”

Beers debuted in 2016 with another local rider, Oliver Munnik, and says “how painless and organised everything is was a real eye-opener … it really is on another level”.

“The race itself is insane … nothing can prepare you enough for just how hard it really is.”