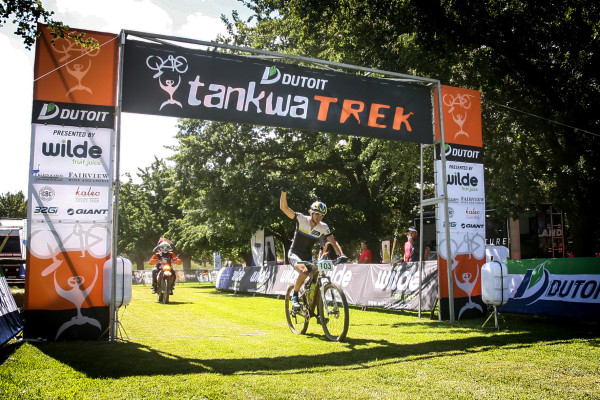 Stefan Sahm (Team Bulls) won the second stage of the DUTOIT Tankwa Trek over 89km and 2240m of vertical ascending in the Ceres Valley in 3 hours, 51 minutes and 14 seconds.

Earlier Kleinhans won R5000 for being the first rider reaching the top of the Merino Monster. Robyn de Groot (Team Ascendis) was the first woman at the top. She also won R5000. This climb – from the bottom of the valley to the top – is 24km with some 2000m of vertical ascend.

After some very aggressive riding by various riders early in the stage it was once again Kleinhans and his partner Reid along with Sahm who started the monster in the lead. Sahm broke away early on, but Kleinhans, Reid, Woolcock and Lill roped him in a kilometer from the top. He then got away again on the downhill towards the finish to win the queen stage of the Tankwa Trek. “I had a bit of load shedding in my legs in that final kilometer to the top! I might have gone too hard at the start of the climb. Today was harder than yesterday for sure.”

It was apparent right form the start that the teams did not want to be caught off guard by Reid and Kleinhans again and the pace was fast early on with all the team gunning for the front spot going into the single-track. “We tested our legs on the short climb just before the monster and got away along with Stefan,” said Kleinhans.

“We knew that Waylon and Darren will fight their way back after the early mechanical and that they are strong climbers, so we wanted to start the climb with a lead. With a kilometer of so to go they caught up with us and then they attacked us a few times. James got behind, but seeing that I felt good I attacked and got to the top first. James was once again super fast on the downhill so we got a gap and when I saw Waylon struggle we just kept going.” 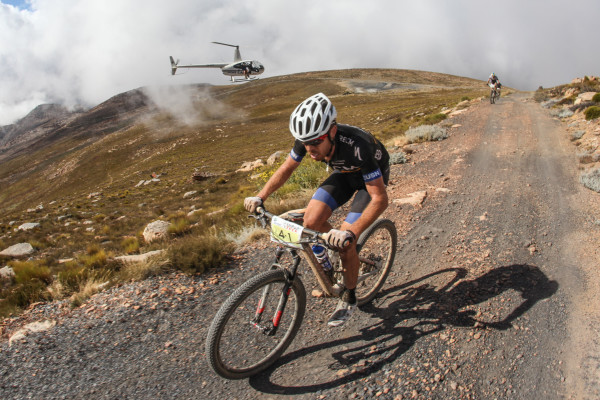 Erik Kleinhans was the first rider reaching the top of the Merino Monster – Photo: www.oakpics.com

De Groot and Jennie Stenerhag were also victorious again. Winning the stage in 4:30.13. Last year’s champions Cherise Stander and Ariane Kleinhans (RECM, 4:31.32) came in second. Stenerhag and De Groot increased their overall lead by another minute. Yolande de Villiers and Bianca Haw (Sasol) were third. “We rode together for most of the day and when we reached Merino Monster, Robyn and I put the hammer down. Even though we were in the lead we know how good Cherise and Ariane are on the downhill so we just did not let up,” said Stenerhag.

Catherine Williamson (Team Asrin, 4:37.51) won the solo-category for women. “I just did my own pace up the climb, but that descent was quite tricky!”

Craig Boyes and Candice Neethling (Team Asrin) won the mixed category in 4:36.11. “That climb was a monster. On the downhill my partner was back to being normal Candice again! Her speed on the downhill is a huge advantage,” said Boyes. Neethling added: “It was something special. That last few corners I was very happy to have Craig around. From now one any hill will just look like a bump!”

Single track here we come, Koue Bokkeveld style… The last day of the third Tankwa Trek starts with a 26 km neutral zone as farm roads and a bit of jeep track will take riders towards Morester, a farm owned by Charl van der Merwe, who has recently spent time cutting in single-track around the harsh and incredible rock formations that the area is so well known for. The Tankwa Trek will be the first to unleash around 30km of virgin single-track to riders. Riding never experienced before, tracks through rock formations, narrow water crossing bridges and a route flowing back towards the finish of a ride never to be forgotten.